AWS Lambda is a serverless, event-driven compute service that allows developers to bring their functions to the cloud easily. A key challenge that Lambda developers often face is to create solutions that handle exceptions and failures gracefully. Some examples include:

Now, with the release of Lambda Dead Letter Queues, Lambda functions can be configured to notify when the function fails, with context on what the failure was.

In this post, we show how you can configure your function to deliver notification to an Amazon SQS queue or Amazon SNS topic, and how you can create a process to automatically generate more meaningful notifications when your Lambda functions fail.

Dead-letter queues are a powerful concept, which help software developers find software issue patterns in their asynchronous processing components. The way it works is simple—when your messaging component receives a message and detects a fatal or unhandled error while processing the message, it sends information about the message that failed to another location, such as another queue or another notification system. SQS provides dead letter queues today, sending messages that couldn’t be handled to a different queue for further investigation.

AWS Lambda Dead Letter Queues builds upon the concept by enabling Lambda functions to be configured with an SQS queue or SNS topic as a destination to which the Lambda service can send information about an asynchronous request when processing fails. The Lambda service sends information about the failed request when the request will no longer be retried. Supported invocations include:

Take the typical beginner use case for learning about serverless applications on AWS: creating thumbnails from images dropped onto an S3 bucket. The transcoding Lambda function can be configured to send any transcoding failures to an SNS topic, which triggers a Lambda function for further investigation. 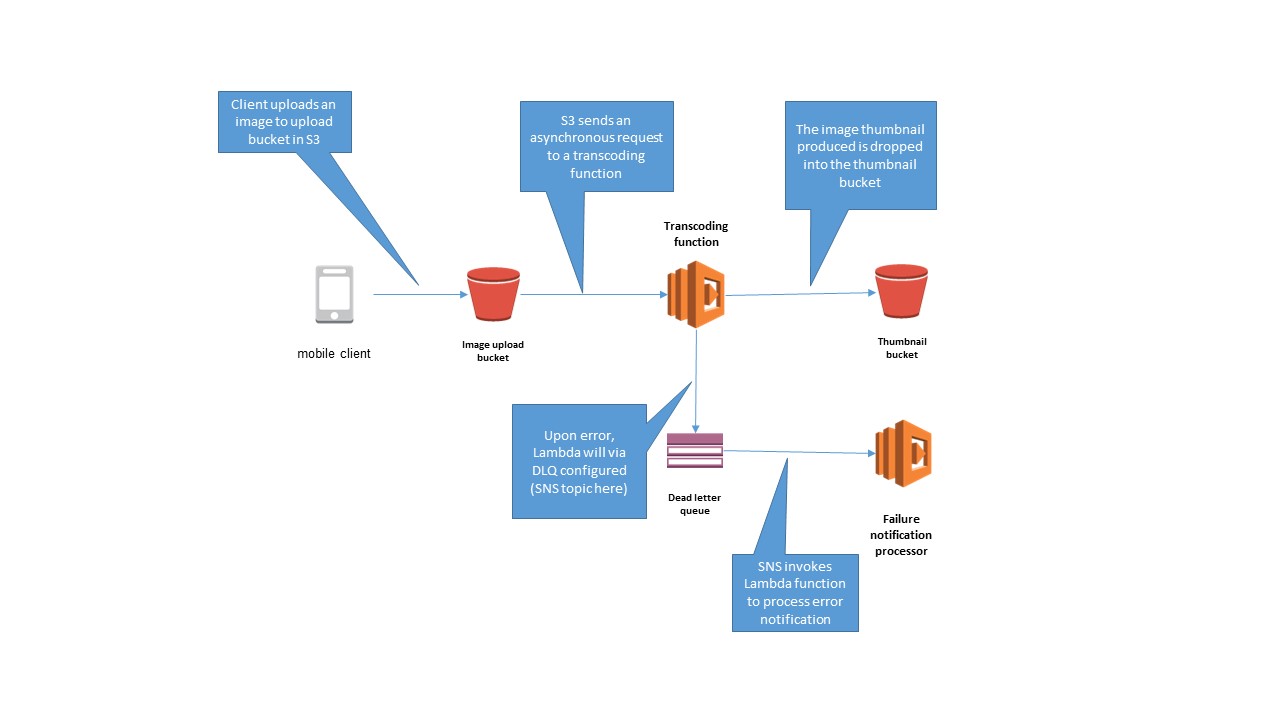 Now, you can set up a dead letter queue for an existing Lambda function and test out the feature.

Configuring a DLQ target for a Lambda function

First, make sure that the execution role for the Lambda function is allowed to publish to the SNS topic. For this demo, use the sns-lambda-test topic. An example is provided below:

If an SQS queue is the intended target, you need a comparable policy that allows the appropriate SendMessage action to the queue.

Next, choose an existing Lambda function against which to configure a dead-letter queue. For this example, choose a predeployed function, such as CreateThumbnail.

Select the function, choose Configuration, expand the **Advanced settings **section in the middle of the page, and scroll to the DLQ Resource form. Choose SNS and for SNS Topic name, enter sns-lambda-test.

That’s it—the function is now configured and ready for testing.

One easy way to test the handler for your dead letter queue is to submit an event that is known to fail for the Lambda function. In this example, you can simply drop a text file pretending to be an image to the S3 bucket, to be recognized by the image thumbnail creator as a non-image file, and have the handler exit with an error message.

When Lambda sends an error notification to an SNS topic, three additional message attributes are attached to the notification in the MessageAttributes object:

An error handler can simply parse for the string Task timed out after in the Value attribute, and act accordingly, such as breaking the request into multiple Lambda invocations, or sending to a different queue that spins up EC2 instances in an Auto Scaling group for handling larger jobs.

In either case, there’s very little that can be handled gracefully in application logic. These kinds of errors can be forwarded to operations support for root cause analysis or break glass fixes.

In the case of a system crash, your dead letter queue receives an error message similar to the following:

In the case of a misconfiguration, your dead letter queue receives an error message along the following lines:

In this example, the Lambda handler was misconfigured to load a non-existent index.js module.

With the launch of Dead Letter Queues, Lambda function developers can now create much simpler functions by focusing only on the business logic, and leverage the AWS Lambda infrastructure to delegate error handling elsewhere in a more graceful manner.