If an EC2 instance is up and running, there may be applications working, like databases, with data in memory or pending I/O operations that cannot be retrieved from an Amazon EBS snapshot. If your application is unable to recover from such a state, you might lose vital data for your business.

Amazon EBS provides block level storage volumes for use with EC2 instances. With EBS, you can create point-in-time snapshots of volumes, stored reliably on Amazon S3. If you rely on EBS snapshots as your backup solution and if you cannot turn off the instance during backup, you can create consistent EBS snapshots, which consists of informing the applications that they are about to be backed up so they can get prepared.

In this post, the first of a two-part series, I show you how to use Run Command and Maintenance Window, two features of Amazon EC2 Systems Manager, to automate the execution of scripts on EC2 instances that create consistent EBS snapshots. First, I explain the approach. Then, I walk you through a practical example to create consistent snapshots of an Amazon Linux EC2 instance running MySQL.

Run Command lets you securely and remotely manage the configuration of Windows or Linux instances. For example, you can run scripts―or commands―without having to log on locally to the instance. Run Command requires the SSM Agent to be installed on the EC2 instances.

I use Run Command to run a script remotely on EC2 instances. The script coordinates the preparation of applications and the creation of EBS snapshots, as follows:

The content of the script varies upon the system and the applications that should be prepared for backup. See the example sections later in this post.

Instances communicate with the Run Command API to retrieve commands to execute and return results, and with the EC2 API to get volume attachment information and create EBS snapshots. To grant permission to call the APIs, I launch the instances with an IAM role for EC2 instances. This role is attached to the SSM Managed Policy AmazonEC2RoleforSSM and to an inline policy which allows ec2:DescribeInstanceAttribute and ec2:CreateSnapshot actions.

Executing commands on a daily basis with Maintenance Windows

Maintenance Windows allows you to specify a recurring time window during which Run Command tasks are executed. I use Maintenance Windows to create consistent EBS snapshots on a daily basis during off-peak hours, because it may temporarily increase resource utilization and affect application performance.

The maintenance window is registered with multiple targets. Each target is a set of EC2 instances that have a tag “ConsistentSnapshot” assigned and an arbitrary value depending on what script to execute. Each target is registered with a task assigned to an SSM document, which describes the actions to perform by Run Command to create consistent EBS snapshots on every instance of this target.

I use Run Command to execute a shell script on the Amazon Linux instance:

First, the shell script prepares MySQL for backup. The command FLUSH TABLES WITH READ LOCK waits for the active transactions to complete, flushes the cache to the filesystem, and prevents clients from making write operations (see FLUSH in the MySQL documentation). You should note that this MySQL backup method implies a short interruption of write operations, and the duration depends on the current size and workload. You should make sure that the backup does not affect your applications.

It then suspends access to the filesystems and creates a stable image
on disk. At this stage, the EBS volume is in a consistent state.

It creates a snapshot of every EBS volume attached to the instance.

Finally, it resumes access to the filesystems and unlocks MySQL.

This shell script is contained in a new SSM document. The maintenance window executes a command from this document every day at midnight on every Linux instance that has a tag “ConsistentSnapshot” equal to “AmazonLinuxMySQL”.

Implementing and testing the example

First, use AWS CloudFormation to provision some of the required resources in your AWS account.

After the stack creation completes, choose Outputs in the CloudFormation console and note the values that the process returned:

After you create a maintenance window, assign a target where the task will run:

Finally, assign a task to perform during the window:

You can view the history either in the History tab of the Maintenance Windows navigation pane of the Amazon EC2 console, as illustrated on the following figure, or in the Run Command navigation pane, with more details about each command executed. 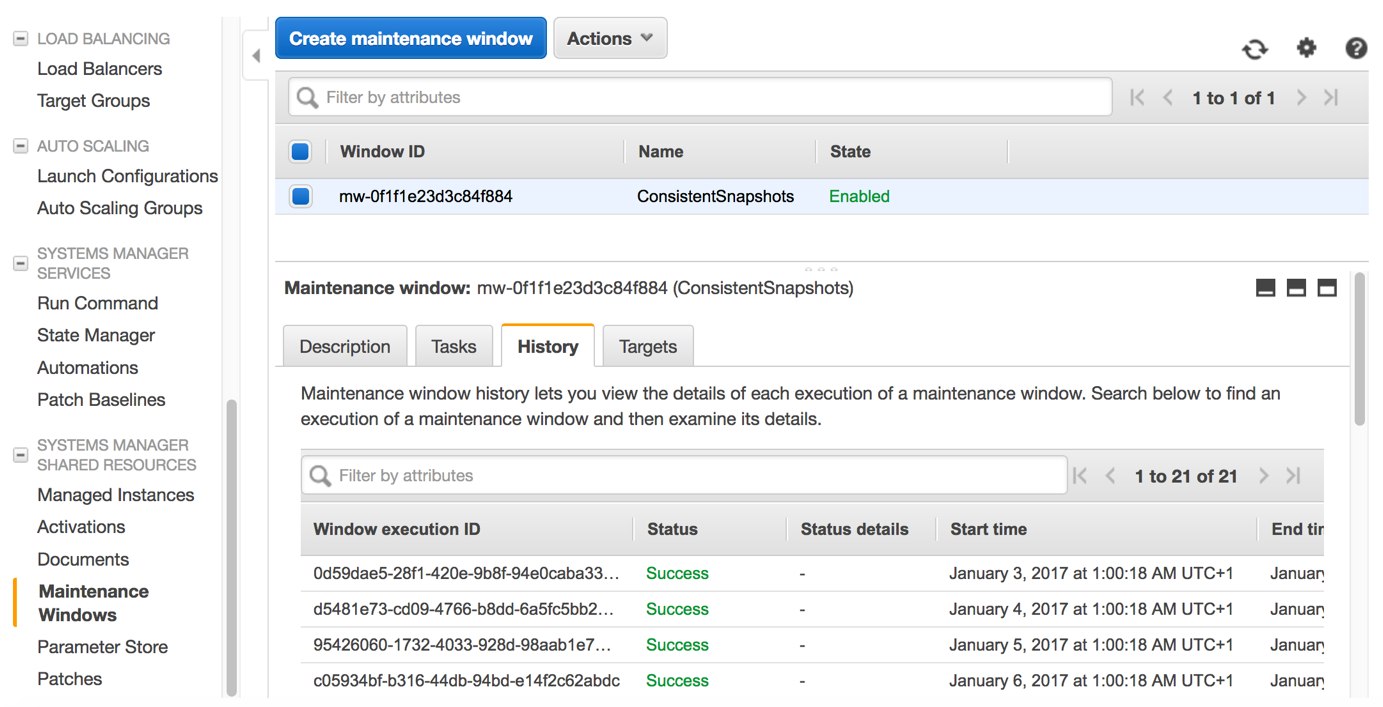 In this post, I showed how you can use Amazon EC2 Systems Manager to create consistent EBS snapshots on a daily basis, with a practical example for MySQL running in an Amazon Linux instance.

In the next part of this two-part series, I walk you through another example to create consistent snapshots of a Windows Server instance with Microsoft VSS (Volume Shadow Copy Service).