It’s now just under two years since we released the Jessie version of Raspbian. Those of you who know that Debian run their releases on a two-year cycle will therefore have been wondering when we might be releasing the next version, codenamed Stretch. Well, wonder no longer – Raspbian Stretch is available for download today! 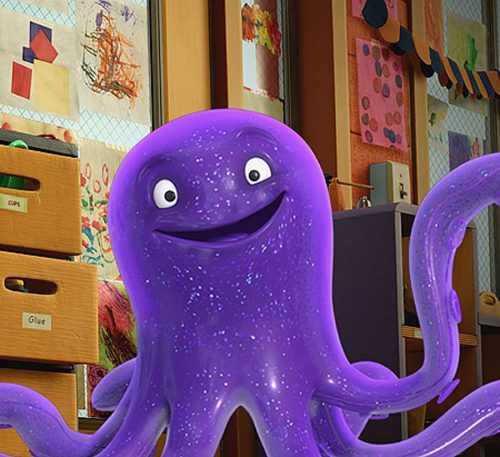 Debian releases are named after characters from Disney Pixar’s Toy Story trilogy. In case, like me, you were wondering: Stretch is a purple octopus from Toy Story 3. Hi, Stretch!

The differences between Jessie and Stretch are mostly under-the-hood optimisations, and you really shouldn’t notice any differences in day-to-day use of the desktop and applications. (If you’re really interested, the technical details are in the Debian release notes here.)

However, we’ve made a few small changes to our image that are worth mentioning.

Version 3.0.1 of Sonic Pi is included – this includes a lot of new functionality in terms of input/output. See the Sonic Pi release notes for more details of exactly what has changed. 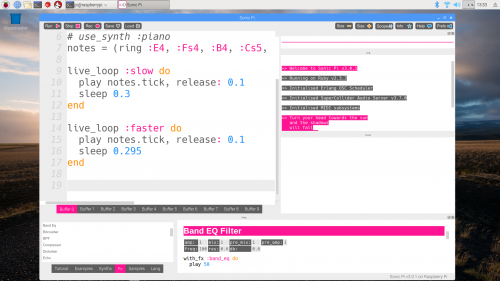 The Chromium web browser has been updated to version 60, the most recent stable release. This offers improved memory usage and more efficient code, so you may notice it running slightly faster than before. The visual appearance has also been changed very slightly. 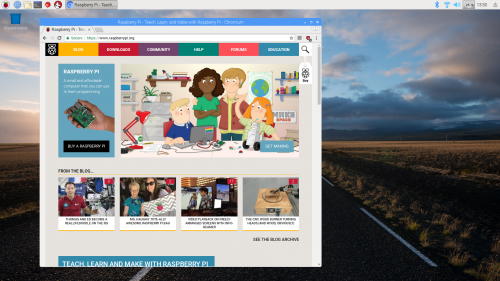 In Jessie, we used PulseAudio to provide support for audio over Bluetooth, but integrating this with the ALSA architecture used for other audio sources was clumsy. For Stretch, we are using the bluez-alsa package to make Bluetooth audio work with ALSA itself. PulseAudio is therefore no longer installed by default, and the volume plugin on the taskbar will no longer start and stop PulseAudio. From a user point of view, everything should still work exactly as before – the only change is that if you still wish to use PulseAudio for some other reason, you will need to install it yourself.

Better handling of other usernames

The default user account in Raspbian has always been called ‘pi’, and a lot of the desktop applications assume that this is the current user. This has been changed for Stretch, so now applications like Raspberry Pi Configuration no longer assume this to be the case. This means, for example, that the option to automatically log in as the ‘pi’ user will now automatically log in with the name of the current user instead.

One other change is how sudo is handled. By default, the ‘pi’ user is set up with passwordless sudo access. We are no longer assuming this to be the case, so now desktop applications which require sudo access will prompt for the password rather than simply failing to work if a user without passwordless sudo uses them.

In the last Jessie release, we added the offline version of Scratch 2. While Scratch 2 itself hasn’t changed for this release, we have added a new extension to allow the SenseHAT to be used with Scratch 2. Look under ‘More Blocks’ and choose ‘Add an Extension’ to load the extension.

This works with either a physical SenseHAT or with the SenseHAT emulator. If a SenseHAT is connected, the extension will control that in preference to the emulator. 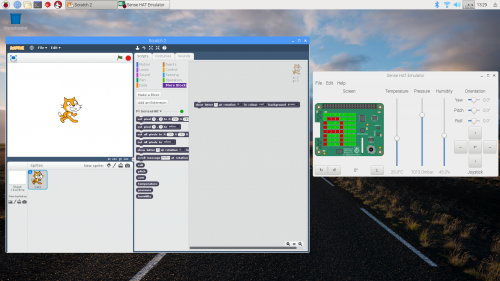 A couple of months ago, a vulnerability was discovered in the firmware of the BCM43xx wireless chipset which is used on Pi 3 and Pi Zero W; this potentially allows an attacker to take over the chip and execute code on it. The Stretch release includes a patch that addresses this vulnerability.

There is also the usual set of minor bug fixes and UI improvements – I’ll leave you to spot those!

How to get Raspbian Stretch

As this is a major version upgrade, we recommend using a clean image; these are available from the Downloads page on our site as usual.

Upgrading an existing Jessie image is possible, but is not guaranteed to work in every circumstance. If you wish to try upgrading a Jessie image to Stretch, we strongly recommend taking a backup first – we can accept no responsibility for loss of data from a failed update.

Then open a terminal window and execute

Answer ‘yes’ to any prompts. There may also be a point at which the install pauses while a page of information is shown on the screen – hold the ‘space’ key to scroll through all of this and then hit ‘q’ to continue.

Finally, if you are not using PulseAudio for anything other than Bluetooth audio, remove it from the image by entering