Get your hands on Pip, the handheld Raspberry Pi–based device for aspiring young coders and hackers from Curious Chip.

Pip is a handheld gaming console from Curios Chip which you can now back on Kickstarter. Using the Raspberry Pi Compute Module 3, Pip allows users to code, hack, and play wherever they are.

We created Pip so that anyone can tinker with technology. From beginners to those who know more — Pip makes it easy, simple, and fun!

Pip’s smart design may well remind you of a certain handheld gaming console released earlier this year. With its central screen and detachable side controllers, Pip has a size and shape ideal for gaming.

Those who have used a Raspberry Pi with the Raspbian OS might be familiar with Minecraft Pi, a variant of the popular Minecraft game created specifically for Pi users to play and hack for free. Users of Pip will be able to access Minecraft Pi from the portable device and take their block-shaped creations with them wherever they go.

And if that’s not enough, Pip’s Pi brain allows coders to create their own games using Scratch, in addition to giving access a growing library of games in Curious Chip’s online arcade.

Pip’s GPIO pins are easily accessible, so that you can expand upon your digital making skills with physical computing projects. Grab your Pip and a handful of jumper leads, and you will be able to connect and control components such as lights, buttons, servomotors, and more! 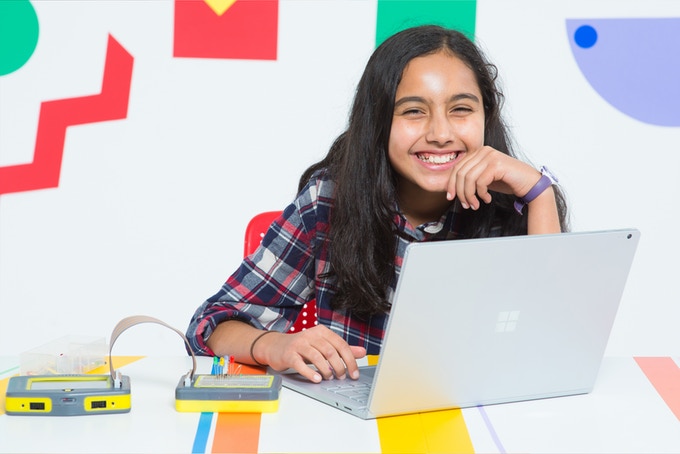 You can also attach any of the range of HAT add-on boards available on the market, such as our own Sense HAT, or ones created by Pimoroni, Adafruit, and others. And if you’re looking to learn a new coding language, you’re in luck: Pip supports Python, HTML/CSS, JavaScript, Lua, and PHP.

Backers can also pledge their funds for additional hardware, such as the Maker Pack, an integrated camera, or a Pip Breadboard Kit.

The breadboard and the optional PipHAT are also compatible with any Raspberry Pi 2 and 3. Nice!

Users of Pip can program their device via Curiosity, a tool designed specifically for this handheld device.

Pip’s programming tool is called Curiosity, and it’s hosted on Pip itself and accessed via WiFi from any modern web browser, so there’s no software to download and install. Curiosity allows Pip to be programmed using a number of popular programming languages, including JavaScript, Python, Lua, PHP, and HTML5. Scratch-inspired drag-and-drop block programming is also supported with our own Google Blockly–based editor, making it really easy to access all of Pip’s built-in functionality from a simple, visual programming language.

If you’d like to back Curious Chip and bag your own Pip, you can check out their Kickstarter page here. And if you watch their promo video closely, you may see a familiar face from the Raspberry Pi community.

Are you planning on starting your own Raspberry Pi-inspired crowd-funded campaign? Then be sure to tag us on social media. We love to see what the community is creating for our little green (or sometimes blue) computer.

The post Pip: digital creation in your pocket from Curious Chip appeared first on Raspberry Pi.