Most malware tries to compromise your systems by using a known vulnerability that the maker of the operating system has already patched. To help prevent malware from affecting your systems, two security best practices are to apply all operating system patches to your systems and actively monitor your systems for missing patches. In case you do need to recover from a malware attack, you should make regular backups of your data.

In today’s blog post (Part 1 of a two-part post), I show how to keep your Amazon EC2 instances that run Microsoft Windows up to date with the latest security patches by using Amazon EC2 Systems Manager. Tomorrow in Part 2, I show how to take regular snapshots of your data by using Amazon EBS Snapshot Scheduler and how to use Amazon Inspector to check if your EC2 instances running Microsoft Windows contain any common vulnerabilities and exposures (CVEs).

What you should know first

To follow along with the solution in this post, you need one or more EC2 instances. You may use existing instances or create new instances. For the blog post, I assume this is an EC2 for Microsoft Windows Server 2012 R2 instance installed from the Amazon Machine Images (AMIs). If you are not familiar with how to launch an EC2 instance, see Launching an Instance. I also assume you launched or will launch your instance in a private subnet. A private subnet is not directly accessible via the internet, and access to it requires either a VPN connection to your on-premises network or a jump host in a public subnet (a subnet with access to the internet). You must make sure that the EC2 instance can connect to the internet using a network address translation (NAT) instance or NAT gateway to communicate with Systems Manager and Amazon Inspector. The following diagram shows how you should structure your Amazon Virtual Private Cloud (VPC). You should also be familiar with Restoring an Amazon EBS Volume from a Snapshot and Attaching an Amazon EBS Volume to an Instance.

Later on, you will assign tasks to a maintenance window to patch your instances with Systems Manager. To do this, the AWS Identity and Access Management (IAM) user you are using for this post must have the iam:PassRole permission. This permission allows this IAM user to assign tasks to pass their own IAM permissions to the AWS service. In this example, when you assign a task to a maintenance window, IAM passes your credentials to Systems Manager. This safeguard ensures that the user cannot use the creation of tasks to elevate their IAM privileges because their own IAM privileges limit which tasks they can run against an EC2 instance. You should also authorize your IAM user to use EC2, Amazon Inspector, Amazon CloudWatch, and Systems Manager. You can achieve this by attaching the following AWS managed policies to the IAM user you are using for this example: AmazonInspectorFullAccess, AmazonEC2FullAccess, and AmazonSSMFullAccess.

The following diagram illustrates the components of this solution’s architecture.

You can use the EBS Snapshot Scheduler to schedule automated snapshots at regular intervals. You will use it to set up regular snapshots of your Amazon EBS volumes. EBS Snapshot Scheduler is a prebuilt solution by AWS that you will deploy in your AWS account. With Amazon EBS snapshots, you pay only for the actual data you store. Snapshots save only the data that has changed since the previous snapshot, which minimizes your cost.

In today’s and tomorrow’s posts, I show you how to:

In this section, I show you how to launch your EC2 instances so that you can use Systems Manager with the instances and use instance tags with EBS Snapshot Scheduler to automate snapshots. This requires three things:

Before launching your EC2 instance, I recommend that you first create an IAM role for Systems Manager, which you will use to update the EC2 instance you will launch. AWS already provides a preconfigured policy that you can use for your new role, and it is called AmazonEC2RoleforSSM.

To follow along, you need an EC2 instance that is running Microsoft Windows Server 2012 R2 and that has an Amazon EBS volume attached. You can use any existing instance you may have or create a new instance.

When launching your new EC2 instance, be sure that:

If you are using an already launched EC2 instance, you can attach the newly created role as described in Easily Replace or Attach an IAM Role to an Existing EC2 Instance by Using the EC2 Console.

The final step of configuring your EC2 instances is to add tags. You will use these tags to configure Systems Manager in Step 2 of this blog post and to configure Amazon Inspector in Part 2. For this example, I add a tag key, Patch Group, and set the value to Windows Servers. I could have other groups of EC2 instances that I treat differently by having the same tag key but a different tag value. For example, I might have a collection of other servers with the Patch Group tag key with a value of IAS Servers.

Note: You must wait a few minutes until the EC2 instance becomes available before you can proceed to the next section.

At this point, you now have at least one EC2 instance you can use to configure Systems Manager, use EBS Snapshot Scheduler, and use Amazon Inspector.

Note: If you have a large number of EC2 instances to tag, you may want to use the EC2 CreateTags API rather than manually apply tags to each instance.

In this section, I show you how to use Systems Manager to apply operating system patches to your EC2 instances, and how to manage patch compliance.

To start, I will provide some background information about Systems Manager. Then, I will cover how to:

To create the new IAM role for Systems Manager, follow the same procedure as in the previous section, but in Step 3, choose the AmazonSSMMaintenanceWindowRole policy instead of the previously selected AmazonEC2RoleforSSM policy. 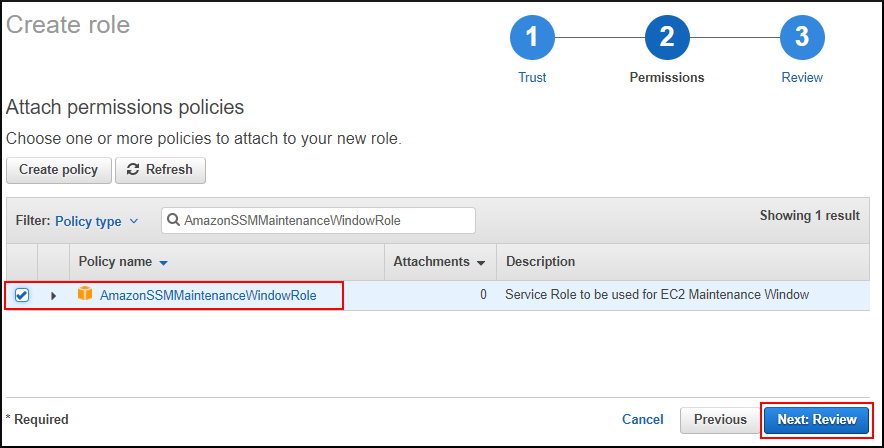 Finish the wizard and give your new role a recognizable name. For example, I named my role MaintenanceWindowRole. 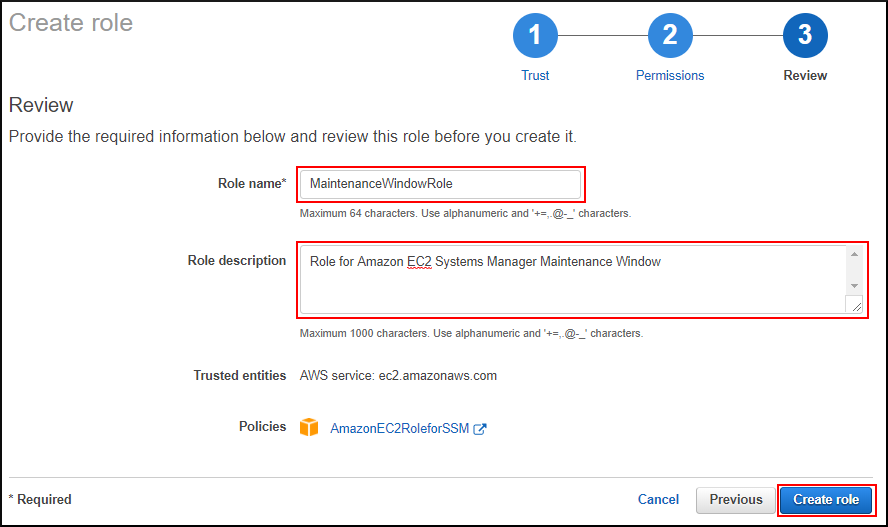 By default, only EC2 instances can assume this new role. You must update the trust policy to enable Systems Manager to assume this role.

To update the trust policy associated with this new role:

Associate a Systems Manager patch baseline with your instance

Navigate to the EC2 console, scroll down to Systems Manager Shared Resources in the navigation pane, and choose Managed Instances. Your new EC2 instance should be available there. If your instance is missing from the list, verify the following:

To define a maintenance window: 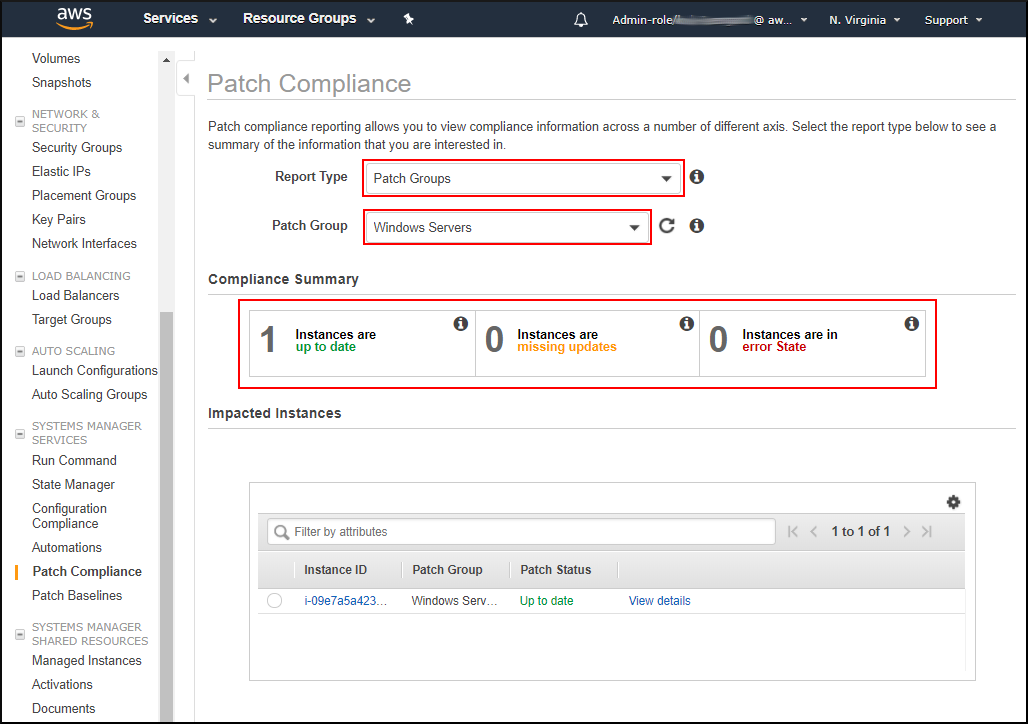 In this section, you have set everything up for patch management on your instance. Now you know how to patch your EC2 instance in a controlled manner and how to check if your EC2 instance is compliant with the patch baseline you have defined. Of course, I recommend that you apply these steps to all EC2 instances you manage.

In Part 1 of this blog post, I have shown how to configure EC2 instances for use with Systems Manager, EBS Snapshot Scheduler, and Amazon Inspector. I also have shown how to use Systems Manager to keep your Microsoft Windows–based EC2 instances up to date. In Part 2 of this blog post tomorrow, I will show how to take regular snapshots of your data by using EBS Snapshot Scheduler and how to use Amazon Inspector to check if your EC2 instances running Microsoft Windows contain any CVEs.

If you have comments about this post, submit them in the “Comments” section below. If you have questions about or issues implementing this solution, start a new thread on the EC2 forum or the Amazon Inspector forum, or contact AWS Support.