The concepts of blue/green and canary deployments have been around for a while now and have been well-established as best-practices for reducing the risk of software deployments.

In a traditional, horizontally scaled application, copies of the application code are deployed to multiple nodes (instances, containers, on-premises servers, etc.), typically behind a load balancer. In these applications, deploying new versions of software to too many nodes at the same time can impact application availability as there may not be enough healthy nodes to service requests during the deployment. This aggressive approach to deployments also drastically increases the blast radius of software bugs introduced in the new version and does not typically give adequate time to safely assess the quality of the new version against production traffic.

In such applications, one commonly accepted solution to these problems is to slowly and incrementally roll out application software across the nodes in the fleet while simultaneously verifying application health (canary deployments). Another solution is to stand up an entirely different fleet and weight (or flip) traffic over to the new fleet after verification, ideally with some production traffic (blue/green). Some teams deploy to a single host (“one box environment”), where the new release can bake for some time before promotion to the rest of the fleet. Techniques like this enable the maintainers of complex systems to safely test in production while minimizing customer impact.

There is somewhat of an impedance mismatch when mapping these concepts to a serverless world. You can’t incrementally deploy your software across a fleet of servers when there are no servers!* In fact, even the term “deployment” takes on a different meaning with functions as a service (FaaS). In AWS Lambda, a “deployment” can be roughly modeled as a call to CreateFunction, UpdateFunctionCode, or UpdateAlias (I won’t get into the semantics of whether updating configuration counts as a deployment), all of which may affect the version of code that is invoked by clients.

The abstractions provided by Lambda remove the need for developers to be concerned about servers and Availability Zones, and this provides a powerful opportunity to greatly simplify the process of deploying software.
*Of course there are servers, but they are abstracted away from the developer.

Before the release of traffic shifting for Lambda aliases, deployments of a Lambda function could only be performed in a single “flip” by updating function code for version $LATEST, or by updating an alias to target a different function version. After the update propagates, typically within a few seconds, 100% of function invocations execute the new version. Implementing canary deployments with this model required the development of an additional routing layer, further adding development time, complexity, and invocation latency.
While rolling back a bad deployment of a Lambda function is a trivial operation and takes effect near instantaneously, deployments of new versions for critical functions can still be a potentially nerve-racking experience.

With the introduction of alias traffic shifting, it is now possible to trivially implement canary deployments of Lambda functions. By updating additional version weights on an alias, invocation traffic is routed to the new function versions based on the weight specified. Detailed CloudWatch metrics for the alias and version can be analyzed during the deployment, or other health checks performed, to ensure that the new version is healthy before proceeding.

Note: Sometimes the term “canary deployments” refers to the release of software to a subset of users. In the case of alias traffic shifting, the new version is released to some percentage of all users. It’s not possible to shard based on identity without adding an additional routing layer.

The simplest possible use of a canary deployment looks like the following:

This is begging to be automated! Here are a few options.

This simple Python script runs as a Lambda function and deploys another function (how meta!) by incrementally increasing the weight of the new function version over a prescribed number of steps, while checking the health of the new version. If the health check fails, the alias is rolled back to its initial version. The health check is implemented as a simple check against the existence of Errors metrics in CloudWatch for the alias and new version.

Because this runs as a Lambda function, it is subject to the maximum timeout of 5 minutes. This may be acceptable for many use cases, but to achieve a slower rollout of the new version, a different solution is required.

This state machine performs essentially the same task as the simple deployment function, but it runs as an asynchronous workflow in AWS Step Functions. A nice property of Step Functions is that the maximum deployment timeout has now increased from 5 minutes to 1 year! 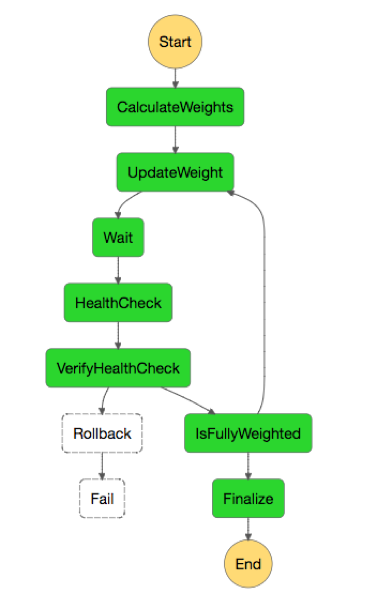 The step function incrementally updates the new version weight based on the steps parameter, waiting for some time based on the interval parameter, and performing health checks between updates. If the health check fails, the alias is rolled back to the original version and the workflow fails.

For example, to execute the workflow:

Getting feedback on the deployment

Because the state machine runs asynchronously, retrieving feedback on the deployment requires polling for the execution status using DescribeExecution or implementing an asynchronous notification (using SNS or email, for example) from the Rollback or Finalize functions. A CloudWatch alarm could also be created to alarm based on the “ExecutionsFailed” metric for the state machine.

A note on health checks and observability

Weighted rollouts like this are considerably more successful if the code is being exercised and monitored continuously. In this example, it would help to have some automation continuously invoking the alias and reporting metrics on these invocations, such as client-side success rates and latencies.

The absence of Lambda Errors metrics used in these examples can be misleading if the function is not getting invoked. It’s also recommended to instrument your Lambda functions with custom metrics, in addition to Lambda’s built-in metrics, that can be used to monitor health during deployments.

These examples could be easily extended in various ways to support different use cases. For example:

Traffic shifting with SAM and CodeDeploy

For those not interested in building custom deployment solutions, AWS CodeDeploy provides an intuitive turn-key implementation of this functionality integrated directly into the Serverless Application Model. Traffic-shifted deployments can be declared in a SAM template, and CodeDeploy manages the function rollout as part of the CloudFormation stack update. CloudWatch alarms can also be configured to trigger a stack rollback if something goes wrong.

It is often the simple features that provide the most value. As I demonstrated in this post, serverless architectures allow the complex deployment orchestration used in traditional applications to be replaced with a simple Lambda function or Step Functions workflow. By allowing invocation traffic to be easily weighted to multiple function versions, Lambda alias traffic shifting provides a simple but powerful feature that I hope empowers you to easily implement safe deployment workflows for your Lambda functions.