Today, a guest post: Alasdair Davies, co-founder of Naturebytes, ZSL London’s Conservation Technology Specialist and Shuttleworth Foundation Fellow, shares the work of the Arribada Initiative. The project uses the Raspberry Pi Zero and camera module to follow the journey of green sea turtles. The footage captured from the backs of these magnificent creatures is just incredible – prepare to be blown away!

Footage from the new Arribada PS-C (pit-stop camera) video tag recently trialled on the island of Principe in unison with the Principe Trust. Engineered by Institute IRNAS (http://irnas.eu/) for the Arribada Initiative (http://blog.arribada.org/).

Access to affordable, open and customisable conservation technologies in the animal tracking world is often limited. I’ve been a conservation technologist for the past ten years, co-founding Naturebytes and working at ZSL London Zoo, and this was a problem that continued to frustrate me. It was inherently expensive to collect valuable data that was necessary to inform policy, to designate marine protected areas, or to identify threats to species.

In March this year, I got a supercharged opportunity to break through these barriers by becoming a Shuttleworth Foundation Fellow, meaning I had the time and resources to concentrate on cracking the problem. The Arribada Initiative was founded, and ten months later, the open source Arribada PS-C green sea turtle tag was born. The video above was captured two weeks ago in the waters of Principe Island, West Africa.

On route to Principe island with 10 second gen green sea #turtle tags for testing. This version has a video & accelerometer payload for behavioural studies, plus a nice wireless charging carry case made by @institute_irnas @ShuttleworthFdn

The tag comprises a Raspberry Pi Zero W sporting the Raspberry Pi camera module, a PiRA power management board, two lithium-ion cells, and a rather nice enclosure. It was built in unison with Institute IRNAS, and there’s a nice user-friendly wireless charging case to make it easy for the marine guards to replace the tags after their voyages at sea. When a tag is returned to one of the docking stations in the case, we use resin.io to manage it, download videos, and configure the tag remotely. 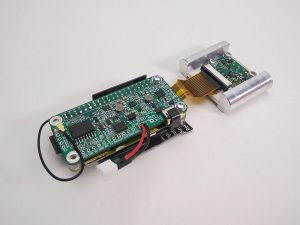 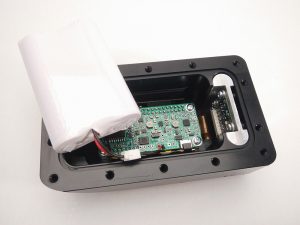 The tags can also be configured to take video clips at timed intervals, meaning we can now observe the presence of marine litter, plastic debris, before/after changes to the ocean environment due to nearby construction, pollution, and other threats.

Discarded fishing nets are lethal to sea turtles, so using this new tag at scale – now finally possible, as the Raspberry Pi Zero helps to drive down costs dramatically whilst retaining excellent video quality – offers real value to scientists in the field. Next year we will be releasing an optimised, affordable GPS version. 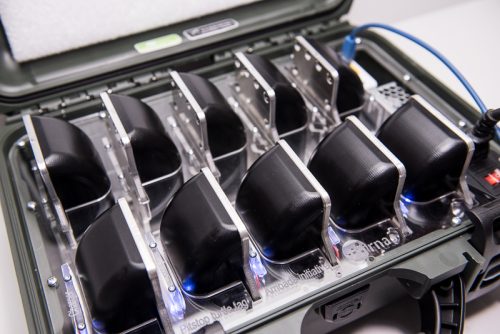 To make this all possible we had to devise a quicker method of attaching the tag to the sea turtles too, so we came up with the “pit-stop” technique (which is what the PS in the name “Arribada PS-C” stands for). Just as a Formula 1 car would visit the pits to get its tyres changed, we literally switch out the tags on the beach when nesting females return, replacing them with freshly charged tags by using a quick-release base plate.

To implement the system we first epoxy the base plate to the turtle, which minimises any possible stress to the turtles as the method is quick. Once the epoxy has dried we attach the tag. When the turtle has completed its nesting cycle (they visit the beach to lay eggs three to four times in a single season, every 10–14 days on average), we simply remove the base plate to complete the field work. 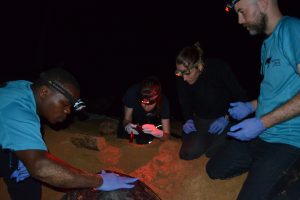 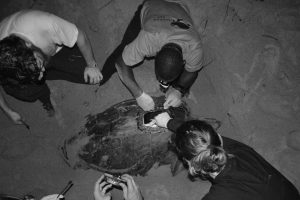 If you’d like to watch more wonderful videos of the green sea turtles’ adventures, there’s an entire YouTube playlist available here. And to keep up to date with the initiative, be sure to follow Arribada and Alasdair on Twitter.

The post Journeying with green sea turtles and the Arribada Initiative appeared first on Raspberry Pi.