Thank you to my colleague Omar Lari for this blog on how to create a continuous deployment pipeline for Kubernetes!

This post describes how to create a continuous deployment architecture for containerized applications. It uses AWS CodeCommit, AWS CodePipeline, AWS CodeBuild, and AWS Lambda to deploy containerized applications into a Kubernetes cluster. In this environment, developers can remain focused on developing code without worrying about how it will be deployed, and development managers can be satisfied that the latest changes are always deployed.

What is Continuous Deployment?

There are many articles, posts and even conferences dedicated to the practice of continuous deployment. For the purposes of this post, I will summarize continuous delivery into the following points:

For a more information, see “Practicing Continuous Integration and Continuous Delivery on AWS”.

How can you use continuous deployment with AWS and Kubernetes?

You can leverage AWS services that support continuous deployment to automatically take your code from a source code repository to production in a Kubernetes cluster with minimal user intervention. To do this, you can create a pipeline that will build and deploy committed code changes as long as they meet the requirements of each stage of the pipeline.

To create the pipeline, you will use the following services:

An Example of Continuous Deployment to Kubernetes: 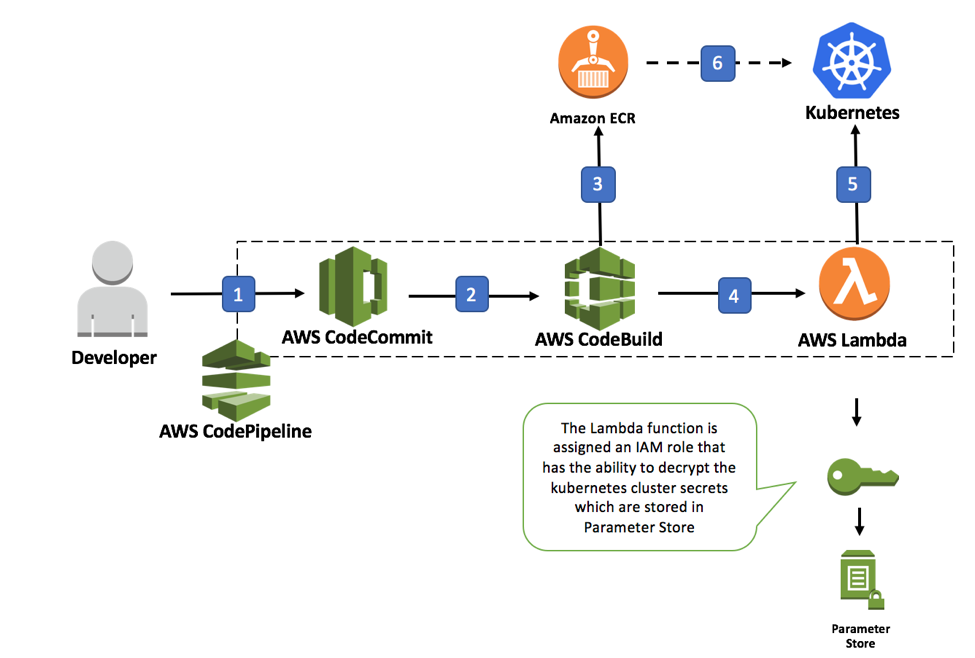 An example pipeline in AWS CodePipeline that supports this architecture can be seen below:

We are excited to see how you leverage this pipeline to help ease your developer experience as you develop applications in Kubernetes.

You’ll find an AWS CloudFormation template with everything necessary to spin up your own continuous deployment pipeline at the CodeSuite – Continuous Deployment Reference Architecture for Kubernetes repo on GitHub. The repository details exactly how the pipeline is provisioned and how you can use it to deploy your own applications. If you have any questions, feedback, or suggestions, please let us know!