Jason Barnett used the pots feature of the Monzo banking API to create a simple e-paper display so that his kids can keep track of their pocket money. 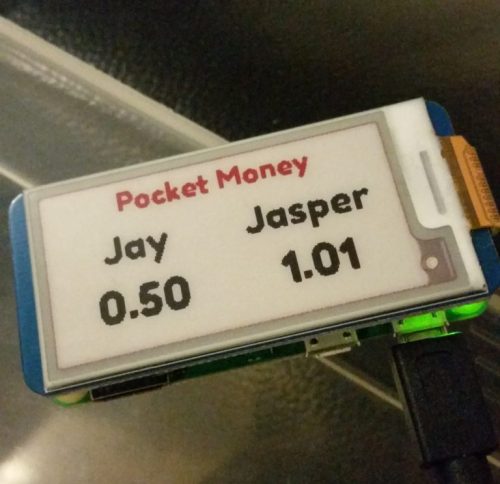 For those outside the UK: Monzo is a smartphone-based bank that allows costumers to manage their money and payment cards via an app, removing the bank clerk middleman.

In the Monzo banking app, users can set up pots, which allow them to organise their money into various, you guessed it, pots. You want to put aside holiday funds, budget your food shopping, or, like Jason, manage your kids’ pocket money? Using pots is an easy way to do it.

After failed attempts at keeping track of his sons’ pocket money via a scrap of paper stuck to the fridge, Jason decided to try a new approach.

He started his build by installing Stretch Lite to the SD card of his Raspberry Pi Zero W. “The Pi will be running headless (without screen, mouse or keyboard)”, he explains on his blog, “so there is no need for a full-fat Raspbian image.” While Stretch Lite was downloading, he set up the Waveshare ePaper HAT on his Zero W. He notes that Pimoroni’s “Inky pHAT would be easiest,” but his tutorial is specific to the Waveshare device.

Before ejecting the SD card, Jason updated the boot partition to allow him to access the Pi via SSH. He talks makers through that process here.

Among the libraries he installed for the project is pyMonzo, a Python wrapper for the Monzo API created by Paweł Adamczak. Monzo is still in its infancy, and the API is partly under construction. Until it’s completed, Paweł’s wrapper offers a more stable way to use it.

After installing the software, it was time to set up the e-paper screen for the tracker. Jason adjusted the code for the API so that the screen reloads information every 15 minutes, displaying the up-to-date amount of pocket money in both kids’ pots.

Here is how Jason describes going to the supermarket with his sons, now that he has completed the tracker:

“Daddy, I want (insert first thing picked up here), I’ve always wanted one of these my whole life!” […] Even though you have never seen that (insert thing here) before, I can quickly open my Monzo app, flick to Account, and say “You have £3.50 in your money box”. If my boy wants it, a 2-second withdrawal is made whilst queueing, and done — he walks away with a new (again, insert whatever he wanted his whole life here) and is happy!

Jason’s blog offers a full breakdown of his project, including all necessary code and the specs for the physical build. Be sure to head over and check it out.

Have you used an API in your projects? What would you build with one?