I’m still catching up with the last couple of AWS re:Invent launches!

Today I would like to tell you about inter-region VPC peering. You have been able to create peering connections between Virtual Private Clouds (VPCs) in the same AWS Region since early 2014 (read New VPC Peering for the Amazon Virtual Cloud to learn more). Once established, EC2 instances in the peered VPCs can communicate with each other across the peering connection using their private IP addresses, just as if they were on the same network.

At re:Invent we extended the peering model so that it works across AWS Regions. Like the existing model, it also works within the same AWS account or across a pair of accounts. All of the use cases that I listed in my earlier post still apply; you can centralize shared resources in an organization-wide VPC and then peer it with multiple, per-department VPCs. You can also share resources between members of a consortium, conglomerate, or joint venture.

Inter-region VPC peering also allows you to take advantage of the high degree of isolation that exists between AWS Regions while building highly functional applications that span Regions. For example, you can choose geographic locations for your compute and storage resources that will help you to comply with regulatory requirements and other constraints.

Peering Details
This feature is currently enabled in the US East (Northern Virginia), US East (Ohio), US West (Oregon), and EU (Ireland) Regions and for IPv4 traffic. You can connect any two VPCs in these Regions, as long as they have distinct, non-overlapping CIDR blocks. This ensures that all of the private IP addresses are unique and allows all of the resources in the pair of VPCs to address each other without the need for any form of network address translation.

Connections are requested by sending an invitation from one VPC to the other and the invitation must be accepted in order to establish the connection. You can set up a peering connection using the AWS Management Console, the VPC APIs, the AWS Command Line Interface (CLI), or the AWS Tools for Windows PowerShell.

Data that passes between VPCs in distinct regions flows across the AWS global network in encrypted form. The data is encrypted in AEAD fashion using a modern algorithm and AWS-supplied keys that are managed and rotated automatically. The same key is used to encrypt traffic for all peering connections; this makes all traffic, regardless of customer, look the same. This anonymity provides additional protection in situations where your inter-VPC traffic is intermittent.

This creates a peering request:

I switch to the other Region and accept the pending request: 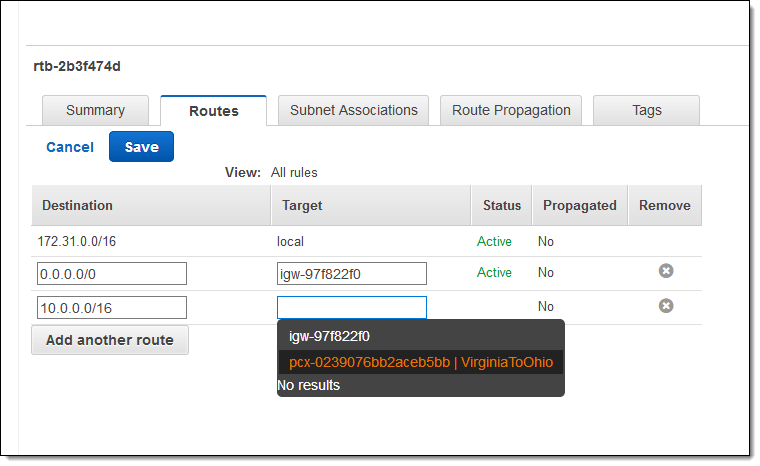 And here’s how I route it from Ohio to Virginia:

To learn more about how to do this, read Updating Your Route Tables for a VPC Peering Connection.

The private DNS names for EC2 instances (ip-10-90-211-18.ec2.internal and the like) will not resolve across a peering connection. If you need to refer to EC2 instances and other AWS resources in other VPCs, consider creating a Private Hosted Zone using Amazon Route 53: 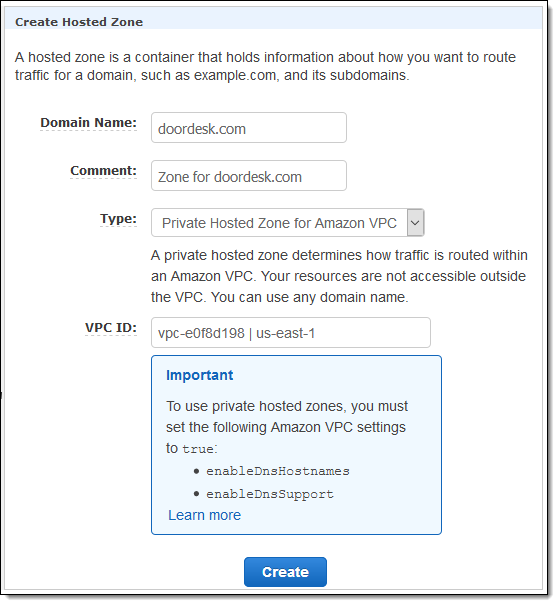