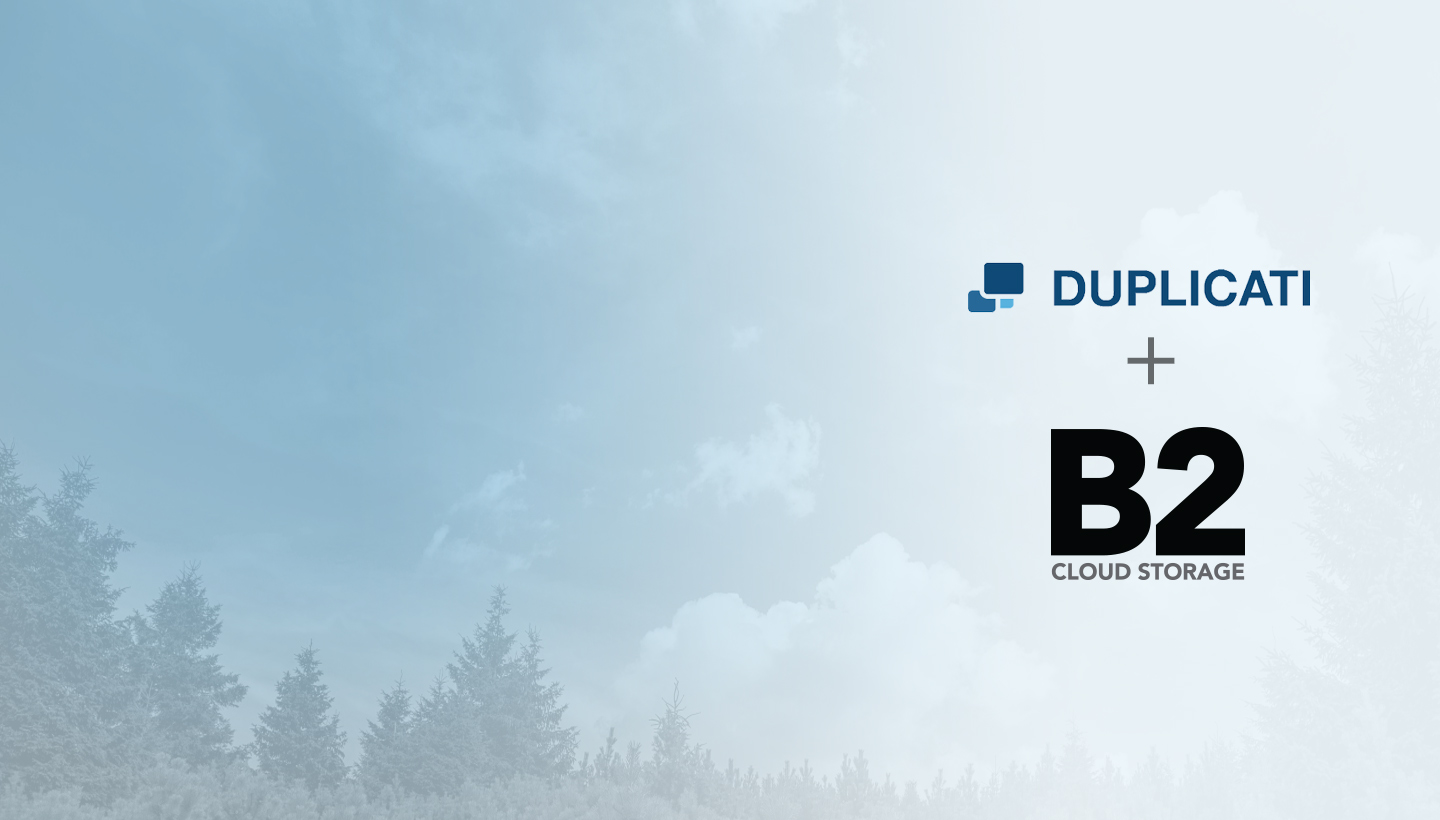 Home and business computer users who want best-of-class backup of their Windows and Mac computers have Backblaze Cloud Backup for easy, automatic, and unlimited backup of their desktops and laptops. Those who need to back up and archive servers, NAS, and Linux systems, or require capabilities not available in Backblaze Backup, often are looking for a straightforward and reliable client with a strong set of features to manage their backups to Backblaze B2 Cloud Storage. A candidate worth considering is Duplicati, which not only has a good feature set with an easy-to-use interface, but runs on Windows, macOS, and Linux. On top of that, it is free.

The Duplicati project was started in June 2008 and originally intended to produce a graphical user interface for the Duplicity program. This included a port of the Duplicity code for use on Windows. A decision was made to work on a clean re-implementation with a new name, which was released in June of 2009.

In 2012, work on Duplicati 2 started, which was a complete rewrite of the original release. It included a new block-based storage engine that allowed efficient, incremental, continuous backups. (Note: we previously wrote about old-school vs. new-school backup approaches in Backing Up Linux to Backblaze B2 with Duplicity and Restic.) The first beta of Duplicati 2 was released in September of 2017.

A second beta version of Duplicati 2.0 was recently released. This update includes a smart backup retention policy, new backup backends, performance enhancements, and many other fixes and improvements. It’s a product that has years of investment — and the efforts show in its functionality and relative polish. The Duplicati project can be found on Github at https://github.com/duplicati.

Using Duplicati with B2

Duplicati has a good Getting Started Guide on its website on how to set up the source and destinations for backups and configure application options. A complete manual also is available on their website. Its wizard interface is so easy, though, that you can probably get started without reading any documentation. There are many optional filters and configurations, though, so it’s good to check out all the options.

To use Duplicati with B2, you just need a unique bucket name for the backup destination and your B2 Account ID and B2 Application Key, which can be obtained from your Backblaze account dashboard.

To get started creating a new backup, select Add backup from the home page. 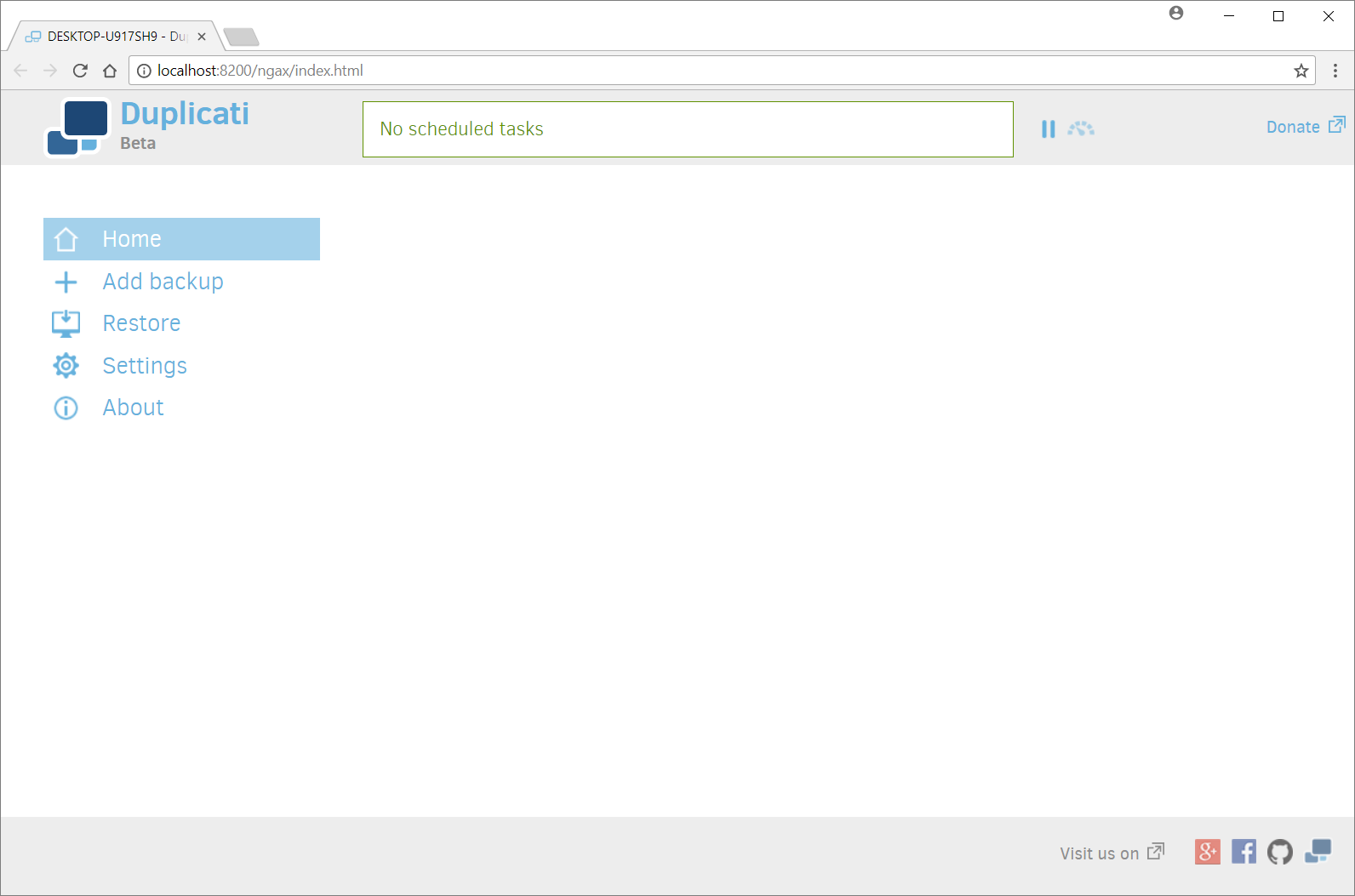 That brings you to the Add a new backup page. 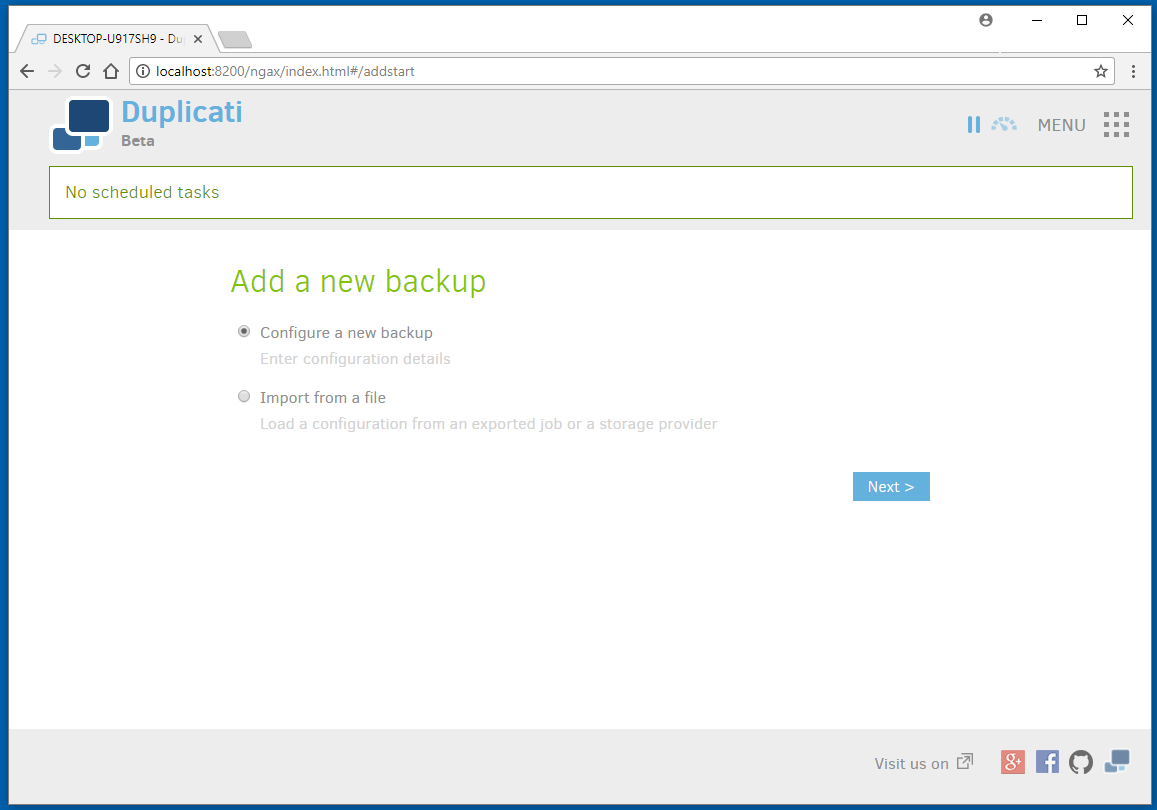 On the Backup destination page, enter your B2 details. After you’ve filled them in, you can test your connection to B2. 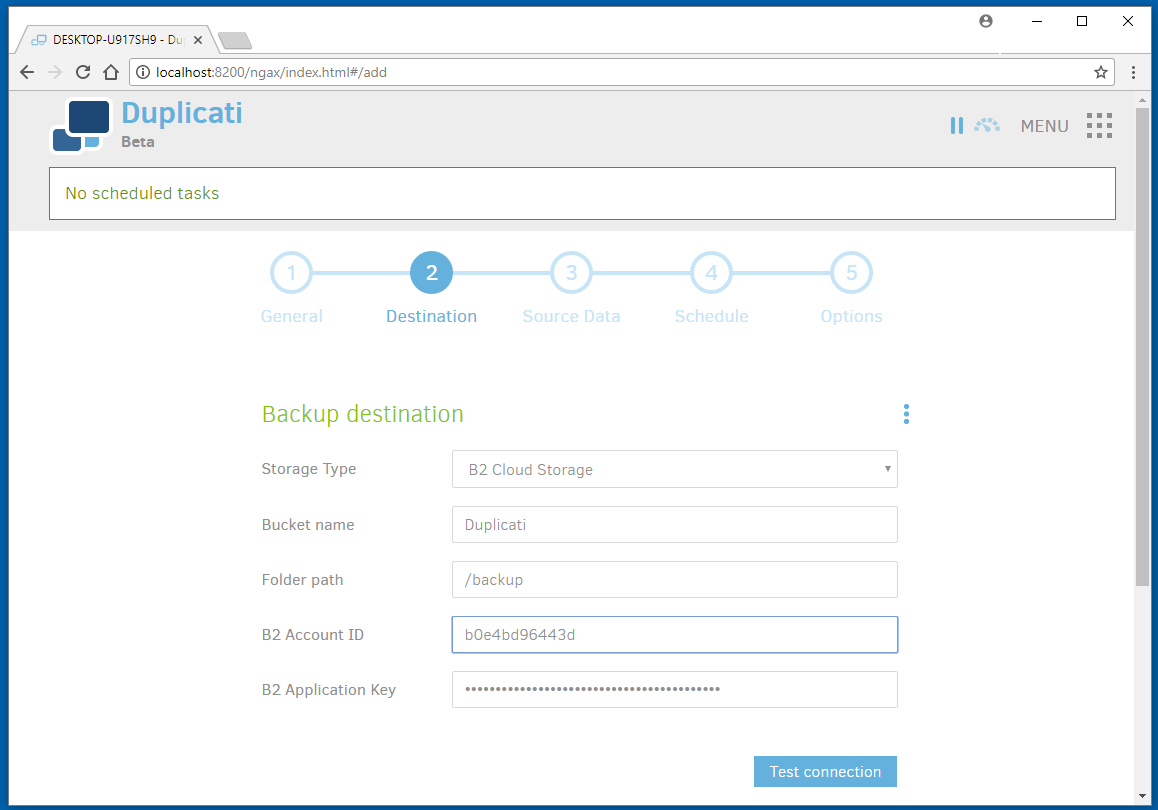 From there, you use the wizard to complete the configuration with the source data, schedule, and options.

A Couple of Options to Note

Backup Test Samples   Duplicati by default will perform verification of your backups by randomly downloading a file and comparing a stored checksum against the file to ensure it hasn’t changed. If you wish to avoid the bandwidth from this option, you can disable it in Settings: Default options, or by using –backup-test-samples=0 from the command line.

Thread Priority   This option in Settings: Default options sets the CPU priority for Duplicati, which can determine how fast your backups and restores complete. Command Line Usage: –thread-priority=[idle to highest]

Once the backup configuration is completed and saved, you can monitor the status of your backups on the Duplicati homepage. 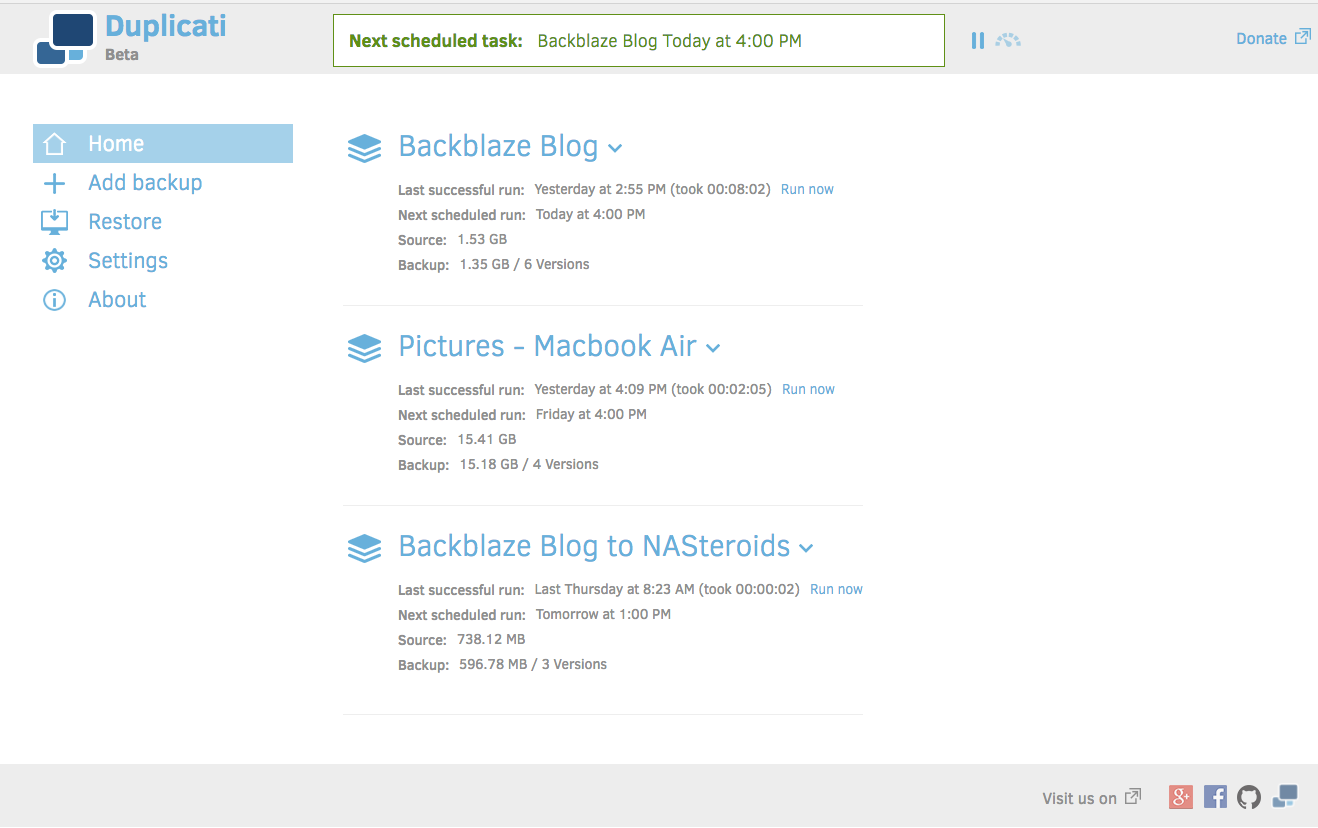 Duplicati is One of Many Integrations with B2

In addition to Duplicati, B2 users have a wide variety of ways to get data into and out of B2 Cloud Storage. The choices range from Backblaze’s own command-line tool and SDK (software development kit), to commercial and freeware applications that run on Windows, macOS, and Linux. For the latest on what tools are integrated with B2, check out our integrations page.

Let Us Know How You’re Using Duplicati and B2

If you’re using Duplicati or another integration tool with B2, please let us know in the comments how it’s working for you.