Three soldiers in the British Army have used a Raspberry Pi to build an autonomous robot, as part of their Foreman of Signals course.

Three soldiers from Blandford Camp have successfully designed and built an autonomous robot as part of their Foreman of Signals Course at the Dorset Garrison.

Forces Radio BFBS carried a story last week about Staff Sergeant Jolley, Sergeant Rana, and Sergeant Paddon, also known as the “Project ROVER” team. As part of their Foreman of Signals training, their task was to design an autonomous robot that can move between two specified points, take a temperature reading, and transmit the information to a remote computer. The team comments that, while semi-autonomous robots have been used as far back as 9/11 for tasks like finding people trapped under rubble, nothing like their robot and on a similar scale currently exists within the British Army. 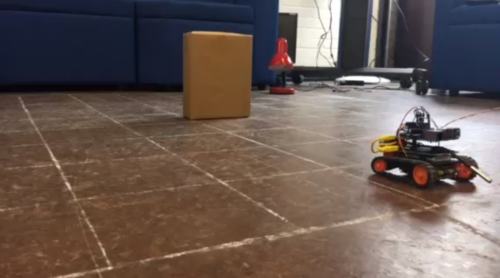 Their build is named ROVER, which stands for Remote Obstacle aVoiding Environment Robot. It’s a buggy that moves on caterpillar tracks, and it’s tethered; we wonder whether that might be because it doesn’t currently have an on-board power supply. A demo shows the robot moving forward, then changing its path when it encounters an obstacle. The team is using RealVNC‘s remote access software to allow ROVER to send data back to another computer. 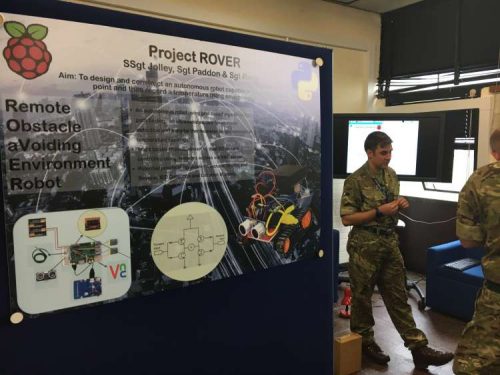 Dave Ball, Senior Lecturer in charge of the Foreman of Signals course, comments that the project is “a fantastic opportunity for [the team] to, even only halfway through the course, showcase some of the stuff they’ve learnt and produce something that’s really quite exciting.” The Project ROVER team explains that the possibilities for autonomous robots like this one are extensive: they include mine clearance, bomb disposal, and search-and-rescue campaigns. They point out that existing semi-autonomous hardware is not as easy to program as their build. In contrast, they say, “with the invention of the Raspberry Pi, this has allowed three very inexperienced individuals to program a robot very capable of doing these things.”

We make Raspberry Pi computers because we want building things with technology to be as accessible as possible. So it’s great to see a project like this, made by people who aren’t techy and don’t have a lot of computing experience, but who want to solve a problem and see that the Pi is an affordable and powerful tool that can help.