Hey AWS Questers and puzzlehunters! We’ve reached the last day of AWS Quest: The Road to re:Invent! Ozz has made it from Seattle to Las Vegas—after taking the long way via Sydney, Tokyo, Beijing, Seoul, Singapore, Mumbai, Stockholm, Cape Town, Paris, London, Sao Paulo, New York City, Toronto, and Mexico City. Now in Vegas, Ozz plans to meet up with a new robotic friend for re:Invent 2018! This is a very special guest for re:Invent, and you might even have a chance to meet that friend at the conference if you’re attending. But first, you need to wrap up this hunt by finding a final answer. This answer is a little different from the previous ones: It’s an instruction to Ozz on how to find this new friend.

To uncover the final solution, you’ll need the answers to the puzzles so far. Here’s what we’ve done to date: Ozz started this journey in a coffee shop in Seattle. Ozz then met a bouncy animal friend in Sydney, sampled sushi in Tokyo, and got control of the nozzles on the Banpo Bridge in Seoul. The little robot then found many terra cotta warriors in Beijing, met a wordy merlion in Singapore, and tasted the spices of Mumbai.

After a quick shopping trip in Stockholm, Ozz investigated the music of Cape Town, did a whole lot more shopping in Paris, and received a letter from a clockwork friend in London. Then, it was off across the Atlantic to São Paulo where Ozz engaged in some healthy capoeira. Our robot hero went to New York City and toured the skyscrapers, had a puck-shaped hockey treat in Toronto, and rode the roller coasters at Chapultepec Park in Mexico City. Along the way, with your help, we decoded the puzzles and got 15 different postcards of Ozz with special souvenirs from each city!

After reaching Las Vegas, Ozz has passed on this message to this new robotic friend: 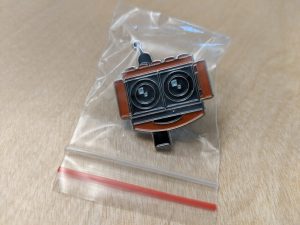 Well, that didn’t make much sense. But it’s likely just another puzzling example of our little robot’s sense of humor. Join the AWS Slack community in solving the puzzle and then type the solution into the submission page. If correct, you’ll see the final postcard from Ozz.

If you’ve been playing along and managed to solve the final puzzle, be sure to tweet at me and Jeff if you’ll be at re:Invent. We have Ozz pins to give out as well as a few other treats. You can also get an Ozz pin by visiting the Swag Booth at the Venetian and letting them know you’re an AWS blog reader.

Thanks for playing AWSQuest! For more puzzling fun, visit the Camp re:Invent Trivia Challenge with Jeff Barr at 7 PM on November 28th in the Venetian Theatre.