AWS Fargate, Amazon ECS, and Amazon ECR now have support for AWS PrivateLink. AWS PrivateLink is a networking technology designed to enable access to AWS services in a highly available and scalable manner, while keeping all the network traffic within the AWS network. When you create AWS PrivateLink endpoints for ECR, ECS, and Fargate, these service endpoints appear as elastic network interfaces with a private IP address in your VPC. 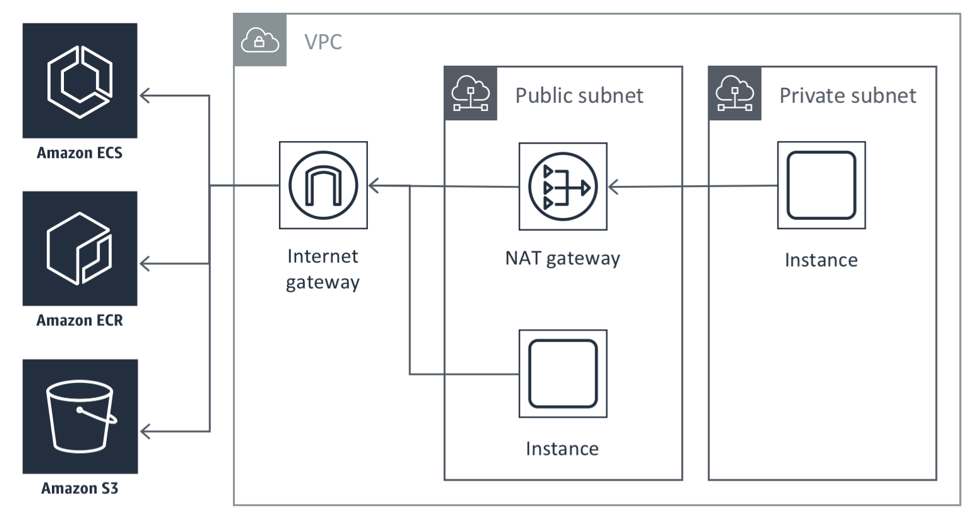 Now that AWS PrivateLink support has been added, instances in both public and private subnets can use it to get private connectivity to download images from Amazon ECR. Instances can also communicate with the ECS control plane via AWS PrivateLink endpoints without needing an internet gateway or NAT gateway. 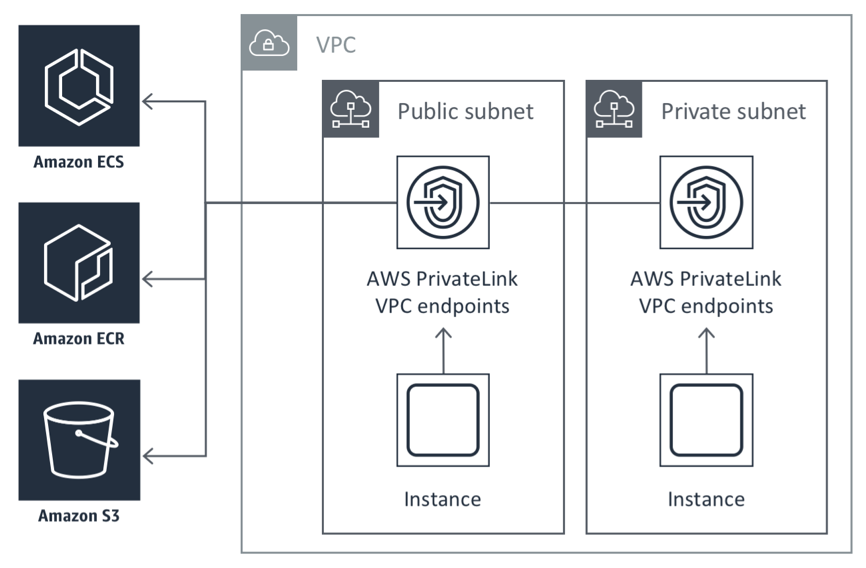 This networking architecture is considerably simpler. It enables enhanced security by allowing you to deny your private EC2 instances access to anything other than these AWS services. That’s assuming that you want to block all other outbound internet access for those instances. For this to work, you must create some AWS PrivateLink resources:

First, create the interface VPC endpoints for ECR using the endpoint creation wizard in the VPC dashboard separately. Select AWS services and select an endpoint. Substitute your region of choice. 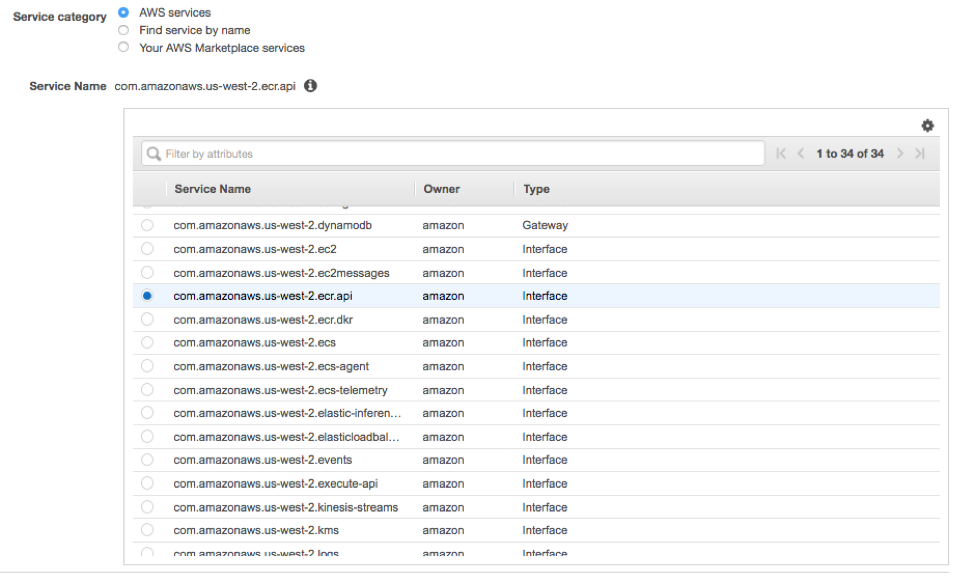 Next, specify the VPC and subnets to which the AWS PrivateLink interface should be added. Make sure that you select the same VPC in which your ECS cluster is running. To be on the safe side, select every Availability Zone and subnet from the list. Each zone has a list of the subnets available. You can select all the subnets in each Availability Zone.

However, depending on your networking needs, you might also choose to only enable the AWS PrivateLink endpoint in your private subnets from each Availability Zone. Let instances running in a public subnet continue to communicate with ECR via the public subnet’s internet gateway.

A private hosted zone enables you to access the resources in your VPC using the Amazon ECR default DNS domain names instead of using private IPv4 address or private DNS hostnames provided by AWS VPC Endpoints. The Amazon ECR DNS hostname that AWS CLI and Amazon ECR SDKs use by default (https://api.ecr.region.amazonaws.com) resolves to your VPC endpoint.

If you enabled a private hosted zone for com.amazonaws.region.ecr.api and you are using an SDK released before January 24, 2019, you must specify the following endpoint when using SDK or AWS CLI. For example:

If you don’t enable a private hosted zone, this would be:

If you enabled a private hosted zone and you are using the SDK released on January 24, 2019 or later, this would be:

You may have a security group that is applied to all the EC2 instances in the cluster, perhaps using an Auto Scaling group. You can create a rule that allows the VPC endpoint to be accessed by any instance in that security group. 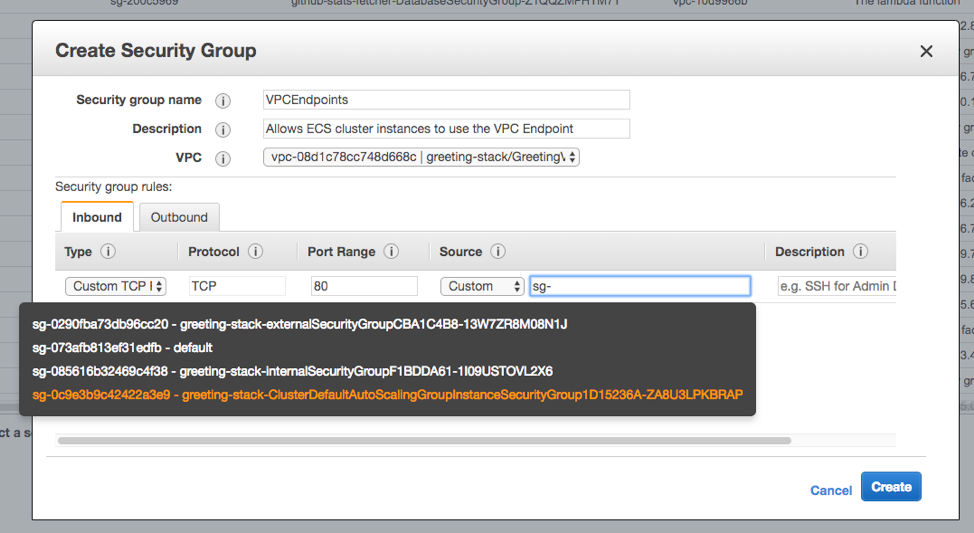 The next step is to create a gateway VPC endpoint for S3. This is necessary because ECR uses S3 to store Docker image layers. When your instances download Docker images from ECR, they must access ECR to get the image manifest and S3 to download the actual image layers.

S3 uses a slightly different endpoint type called a gateway. Be careful about adding an S3 gateway to your VPC if your application is actively using S3. With gateway endpoints, your application’s existing connections to S3 may be briefly interrupted while the gateway is being added. You may have a busy cluster with many active ECS deployments, causing image layer downloads from S3. Or, your application itself may make heavy usage of S3. In that case, it’s best to create a fresh new VPC with an S3 gateway, then migrate your ECS cluster and its containers into that VPC.

Instead of using a security group, the gateway endpoint uses an IAM policy document to limit access to the service. This policy is similar to an IAM policy but does not replace the default level of access that your applications have through their IAM role. It just further limits what portions of the service are available via the gateway. It’s okay to just use the default Full Access policy. Any restrictions you have put on your task IAM roles or other IAM user policies still apply on top of this policy.

Choose Create to add this gateway endpoint to your VPC. When you view the route tables in your VPC subnets, you see an S3 gateway that is used whenever ECR Docker image layers are being downloaded from S3.

In addition to downloading Docker images from ECR, your EC2 instances must also communicate with the ECS control plane to receive orchestration instructions.

Create these three interface endpoints in the same way that you created the endpoint for ECR, by adding each endpoint and setting the subnets and security group for the endpoint.

After the endpoints are created and added to your VPC, there is one additional step. Restart any ECS agents that are currently running in the VPC. The ECS agent uses a persistent web socket connection to the ECS backend and VPC endpoints do not interrupt existing connections. The agent continues to use its existing connection instead of establishing a new connection through the new endpoint, unless you restart it.

To restart the agent with no disruption to your application containers, you can connect using SSH to each EC2 instance in the cluster and issue the following command:

This restarts the ECS agent without stopping any of the other application containers on the host. Your application may be stateless and safe to stop at any time, or you may not have or want SSH access to the underlying hosts. In that case, choose to just reboot each EC2 instance in the cluster one at a time. This restarts the agent on that host while also restarting any service launched tasks on that host on a different host.

If you are using AWS Fargate, you can issue an UpdateService API call to do a rolling restart of all your containers. Or, manually stop your running containers one by one and let them be automatically replaced. When they restart, they use an ECS agent that is communicating using the new ECS endpoints. The Docker image is downloaded using the ECR endpoint and S3 gateway.

In this post, I showed you how to add AWS PrivateLink endpoints to your VPC for ECS and ECR, including an S3 gateway for ECR layer downloads. These endpoints work whether you are running your containers on EC2 instances in a self-managed cluster in your VPC, or as Fargate containers running in your VPC.

Your ECS cluster or Fargate tasks communicate directly with the ECS control plane. They should be able to download Docker images directly without needing to make any connections outside of your VPC via an internet gateway or NAT gateway. All container orchestration traffic stays inside the VPC.