Live business data and real-time analytics are critical to informed decision-making and customer service. For example, streaming services like Netflix process billions of traffic flows each day to help you binge-watch your favorite shows. And consumer audio specialists like Sonos monitor a billion events per week to improve listener experiences. These data-savvy businesses collect and analyze massive amounts of real-time data every day.

Before the adoption of enhanced fan-out technology, users consumed data from a Kinesis data stream with multiple AWS Lambda functions sharing the same 2 MB/second outbound throughput. Due to shared bandwidth constraints, no more than two or three functions could efficiently connect to the data stream at a time, as shown in the following diagram.

In August of 2018, Kinesis Data Streams announced a solution: support for enhanced fan-out and HTTP/2 for faster streaming. The enhanced fan-out method is an option that you can use for consuming Kinesis data streams at a higher capacity. The enhanced capacity enables you to achieve higher outbound throughput without having to provision more streams or shards in the same stream.

When using the enhanced fan-out option, first create a Kinesis data stream consumer. A consumer is an isolated connection to the stream that provides a 2 MB/second outbound throughput. A Kinesis data stream can support up to five consumers, providing a combined outbound throughput capacity of 10MB/second/shard. As the stream scales dynamically by adding shards, so does the amount of throughput scale through the consumers.

Just before re:Invent 2018, AWS Lambda announced support for enhanced fan-out and HTTP/2. Lambda functions can now be triggered using the enhanced fan-out pattern to reduce latency. These improvements increase the amount of real-time data that can be processed in serverless applications, as seen in the following diagram.

The streaming technology in HTTP/2 increases the output ability of Kinesis data streams. In addition, it allows data delivery from producers to consumers in 70 milliseconds or better (a 65% improvement) in typical scenarios. These new features enable you to build faster, more reactive, highly parallel, and latency-sensitive applications on top of Kinesis Data Streams.

To demonstrate the advantage of Kinesis Data Streams enhanced fan-out, I built an application with a single shard stream. It has three Lambda functions connected using the standard method and three Lambda functions connected using enhanced fan-out for consumers. I created roughly 76 KB of dummy data and inserted it into the stream at 1,000 records per second. After four seconds, I stopped the process, leaving a total of 4,000 records to be processed.

As seen in the following diagram, each of the enhanced fan-out functions processed the 4000 records in under 2 seconds, averaging at 1,852 MS each. Interestingly, the standard method got a jumpstart in the first function, processing 4,000 records in 1,732 MS. However, because of the shared resources, the other two functions took longer to process the data, at just over 2.5 seconds.

By Kinesis Data Streams standards, 4000 records is a small dataset. But when processing millions of records in real time, the latency between standard and enhanced fan-out becomes much more significant.

Show me the code

To demonstrate the use of Kinesis Data Streams enhanced fan-out with Lambda functions, I built a simple application. It ingests simulated IoT sensor data and stores it in an Amazon DynamoDB table as well as in an Amazon S3 bucket for later use. I could have conceivably done this in a single Lambda function. However, to keep things simple, I broke it into two separate functions.

I built the Kinesis-Enhanced-Fan-Out-to-DDB-S3 application and made it available through the AWS Serverless Application Repository.

On the deployment status page, you can monitor the resources being deployed, including policies and capabilities. 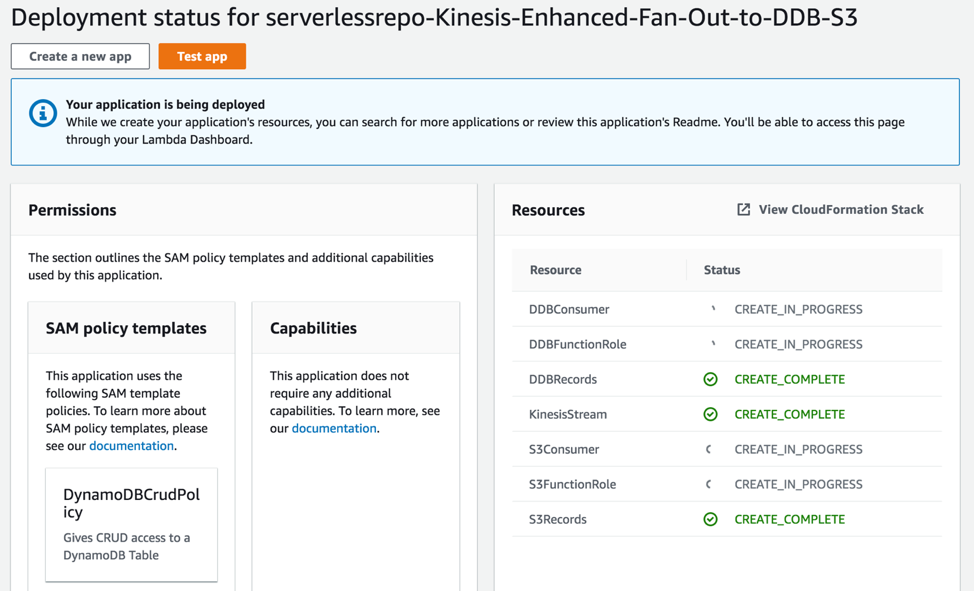 After all the resources deploy, you should see a green banner.

Take a moment to examine the list of deployed resources. The two Lambda functions, DDBFunction and S3Function, receive data and write to DynamoDB and S3, respectively. Additionally, two roles have been created to allow the functions access to their respective targets.

There are also two consumers, DDBConsumer and S3Consumer, which provide isolated output at 2 MB/second throughput. Each consumer is connected to the KinesisStream stream and triggers the Lambda functions when data occurs.

Also, there is a DynamoDB table called DBRecords and an S3 bucket called S3Records.

Finally, there is a stream consumption app, as shown in the following diagram.

Now that you have your application installed, test it by putting data into the Kinesis data stream.

There are several ways to do this. You can build your producer using the Kinesis Producer Library (KPL), or you could create an app that uses the AWS SDK to input data. However, there is an easier way that suits your purposes for this post: the Amazon Kinesis Data Generator. The easiest way to use this tool is to use the hosted generator and follow the setup instructions.

After you have the generator configured, you should have a custom URL to generate data for your Kinesis data stream. In your configuration steps, you created a username and password. Log in to the generator using those credentials.

When you are logged in, you can generate data for your stream test.

At this point, if all went according to plan, you should see data in both your DynamoDB table and S3 bucket. Use the following steps to verify that your enhanced fan-out process worked.

The following screenshot shows the first 100 items that your database absorbed from the DDBFunction attached to KinesisStream through DDBConsumer. 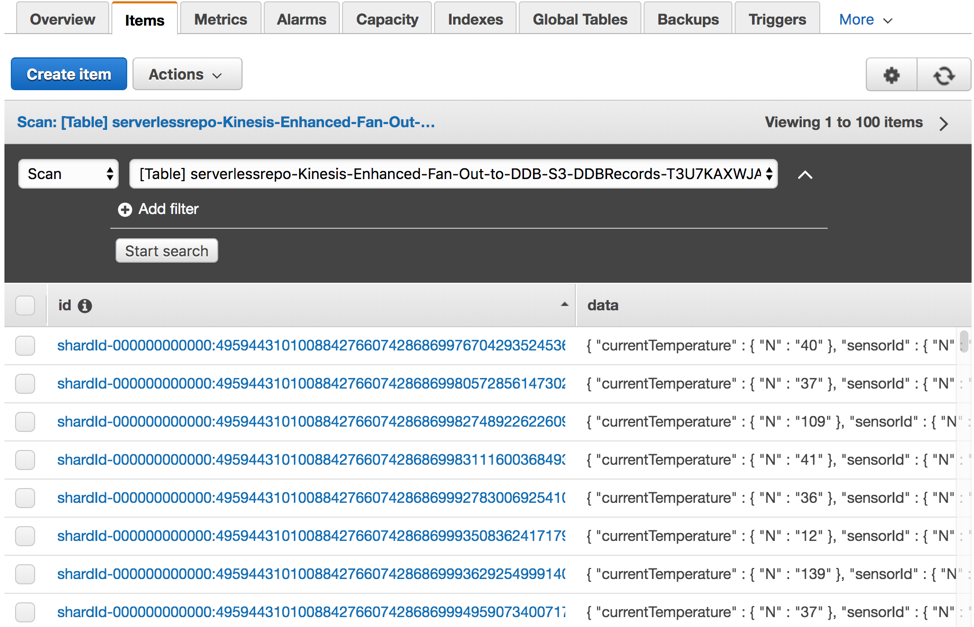 Next, check your S3 bucket,

As in DynamoDB, you should now see the fake IoT sensor data stored in your S3 bucket for later use.

Now that the demonstration is working, I want to point out the benefits of what you have just done. By using the enhanced fan-out method, you have increased your performance in the following ways.

Using Lambda functions in concert with Kinesis Data Streams to collect and analyze massive amounts of data isn’t a new idea. However, the introduction of enhanced fan-out technology and HTTP/2 enables you to use more functions at the same time without losing throughput capacity.

I hope this helps. Happy coding!