AWS in Los Angeles
Today we are launching a Local Zone in Los Angeles, California. The Local Zone is a new type of AWS infrastructure deployment that brings select AWS services very close to a particular geographic area. This Local Zone is designed to provide very low latency (single-digit milliseconds) to applications that are accessed from Los Angeles and other locations in Southern California. It will be of particular interest to highly-demanding applications that are particularly sensitive to latency. This includes:

All About Local Zones
The new Local Zone in Los Angeles is a logical part of the US West (Oregon) Region (which I will refer to as the parent region), and has some unique and interesting characteristics: 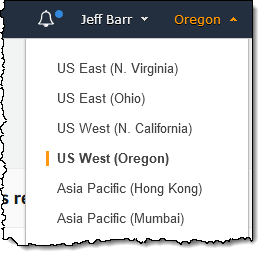 Naming – The Local Zone can be accessed programmatically as us-west-2-lax-1a. All API, CLI, and Console access takes place through the us-west-2 API endpoint and the US West (Oregon) Console.

Networking – The Local Zone in Los Angeles is connected to US West (Oregon) over Amazon’s private backbone network. Connections to the public internet take place across an Internet Gateway, giving you local ingress and egress to reduce latency. Elastic IP Addresses can be shared by a group of Local Zones in a particular geographic location, but they do not move between a Local Zone and the parent region. The Local Zone also supports AWS Direct Connect, giving you the opportunity to route your traffic over a private network connection.

Services – We are launching with support for seven EC2 instance types (T3, C5, M5, R5, R5d, I3en, and G4), two EBS volume types (io1 and gp2), Amazon FSx for Windows File Server, Amazon FSx for Lustre, Application Load Balancer, and Amazon Virtual Private Cloud. Single-Zone RDS is on the near-term roadmap, and other services will come later based on customer demand. Applications running in a Local Zone can also make use of services in the parent region.

Parent Region – As I mentioned earlier, the new Local Zone is a logical extension of the US West (Oregon) region, and is managed by the “control plane” in the region. API calls, CLI commands, and the AWS Management Console should use “us-west-2” or US West (Oregon).

AWS – Other parts of AWS will continue to work as expected after you start to use this Local Zone. Your IAM resources, CloudFormation templates, and Organizations are still relevant and applicable, as are your tools and (perhaps most important) your investment in AWS training.

Pricing & Billing – Instances and other AWS resources in Local Zones will have different prices than in the parent region. Billing reports will include a prefix that is specific to a group of Local Zones that share a physical location. EC2 instances are available in On Demand & Spot form, and you can also purchase Savings Plans.

Using a Local Zone
The first Local Zone is available today, and you can request access here:

After opting in, I can list my AZs and see that the Local Zone is included: 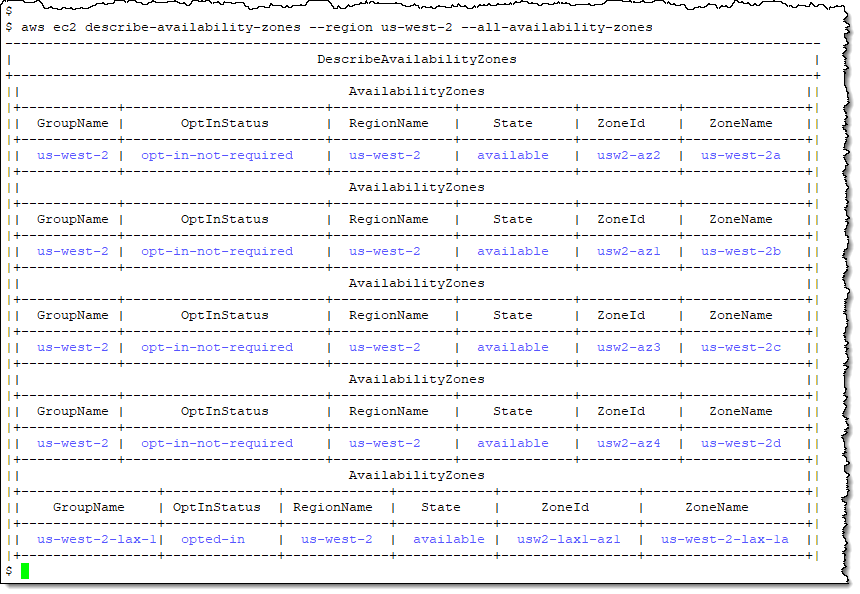 Then I create a new VPC subnet for the Local Zone. This gives me transparent, seamless connectivity between the parent zone in Oregon and the Local Zone in Los Angeles, all within the VPC:

I can create EBS volumes:

They are, as usual, ready within seconds:

I can also see and use the Local Zone from within the AWS Management Console:

I can also use the AWS APIs, CloudFormation templates, and so forth.

Thinking Ahead
Local Zones give you even more architectural flexibility. You can think big, and you can think different! You now have the components, tools, and services at your fingertips to build applications that make use of any conceivable combination of legacy on-premises resources, modern on-premises cloud resources via AWS Outposts, resources in a Local Zone, and resources in one or more AWS regions.

In the fullness of time (as Andy Jassy often says), there could very well be more than one Local Zone in any given geographic area. In 2020, we will open a second one in Los Angeles (us-west-2-lax-1b), and are giving consideration to other locations. We would love to get your advice on locations, so feel free to leave me a comment or two!

Now Available
The Local Zone in Los Angeles is available now and you can start using it today. Learn more about Local Zones.