Web and application users and organizations have expressed a growing desire to conduct most of their HTTP communication securely by using HTTPS. At its 2016 Worldwide Developers Conference, Apple announced that starting in January 2017, apps submitted to its App Store will be required to support App Transport Security (ATS). ATS requires all connections to web services to use HTTPS and TLS version 1.2. In addition, Google has announced that starting in January 2017, new versions of its Chrome web browser will mark HTTP websites as being “not secure.”

In this post, I show how you can generate Secure Sockets Layer (SSL) or Transport Layer Security (TLS) certificates by using AWS Certificate Manager (ACM), apply the certificates to your Amazon CloudFront distributions, and deliver your websites and APIs over HTTPS.

Hypertext Transfer Protocol (HTTP) was proposed originally without the need for security measures such as server authentication and transport encryption. As HTTP evolved from covering simple document retrieval to sophisticated web applications and APIs, security concerns emerged. For example, if someone were able to spoof a website’s DNS name (perhaps by altering the DNS resolver’s configuration), they could direct users to another web server. Users would be unaware of this because the URL displayed by the browser would appear just as the user expected. If someone were able to gain access to network traffic between a client and server, that individual could eavesdrop on HTTP communication and either read or modify the content, without the client or server being aware of such malicious activities.

Hypertext Transfer Protocol Secure (HTTPS) was introduced as a secure version of HTTP. It uses either SSL or TLS protocols to create a secure channel through which HTTP communication can be transported. Using SSL/TLS, servers can be authenticated by using digital certificates. These certificates can be digitally signed by one of the certificate authorities (CA) trusted by the web client. Certificates can mitigate website spoofing and these can be later revoked by the CA, providing additional security. These revoked certificates are published by the authority on a certificate revocation list, or their status is made available via an online certificate status protocol (OCSP) responder. The SSL/TLS “handshake” that initiates the secure channel exchanges encryption keys in order to encrypt the data sent over it.

Use ACM and CloudFront to deliver HTTPS websites and APIs

CloudFront is a global content delivery network (CDN) service that accelerates the delivery of your websites, APIs, video content, and other web assets. CloudFront’s proportion of traffic delivered via HTTPS continues to increase as more customers use the secure protocol to deliver their websites and APIs.

The following diagram illustrates an architecture with ACM, a CloudFront distribution and its origins, and how they integrate to provide HTTPS access to end users and applications. 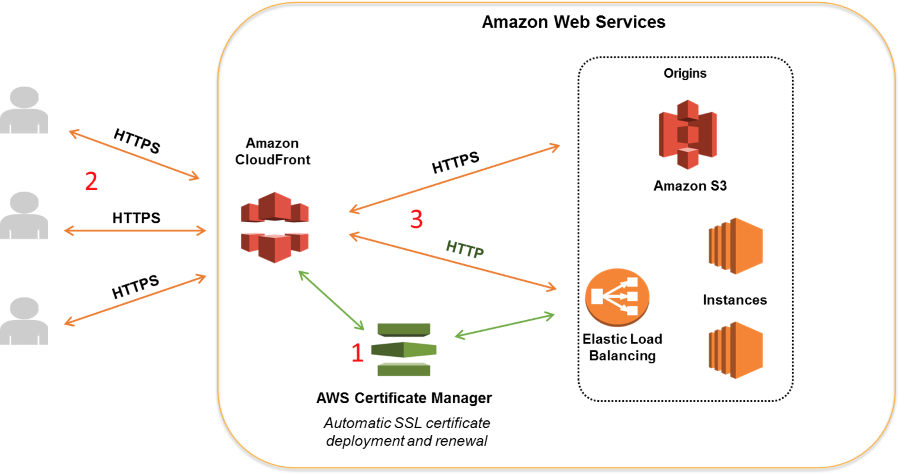 CloudFront enables easy HTTPS adoption. It provides a default *.cloudfront.net wildcard certificate and supports custom certificates, which can be either created by a third-party CA, or created and managed by ACM. ACM automates the process of generating and associating certificates with your CloudFront distribution for the first time and on each renewal. CloudFront supports the Server Name Indication (SNI) TLS extension (enabling efficient use of IP addresses when hosting multiple HTTPS websites) and dedicated-IP SSL/TLS (for older browsers and legacy clients that do no support SNI).

Keeping that background information in mind, I will now show you how you can generate a certificate with ACM and associate it with your CloudFront distribution.

In order to help deliver websites and APIs that are compliant with Apple’s ATS requirements, you can generate a certificate in ACM and associate it with your CloudFront distribution.

To generate a certificate with ACM and associate it with your CloudFront distribution:

We encourage you to use HTTPS to help make your websites and APIs more secure. Therefore, we recommend that you configure CloudFront to redirect HTTP requests to HTTPS.

To configure CloudFront to redirect HTTP requests to HTTPS:

I could also consider employing an HTTP Strict Transport Security (HSTS) policy on my website. In this case, I would add a Strict-Transport-Security response header at my origin to instruct browsers and other applications to make only HTTPS requests to my website for a period of time specified in the header’s value. This ensures that if a user submits a URL to my website specifying only HTTP, the browser will make an HTTPS request anyway. This is also useful for websites that link to my website using HTTP URLs.

CloudFront and ACM enable more secure communication between your users and your websites. CloudFront allows you to adopt HTTPS for your websites and APIs. ACM provides a simple way to request, manage, and renew your SSL/TLS certificates, and deploy those to AWS services such as CloudFront. Mobile application developers and API providers can more easily meet Apple’s ATS requirements now using CloudFront, in time for the January 2017 deadline.

If you have comments about this post, submit them in the “Comments” section below. If you have implementation questions, please start a new thread on the CloudFront forum.

You can use AWS WAF (a web application firewall) to help protect your web applications from exploits that originate from groups of IP addresses that are known to be operated by bad actors such as spammers, malware distributors, and botnets. The IP addresses used may change over time as these bad actors attempt to avoid detection. In this post, I will show how to synchronize AWS WAF Rules with reputation lists.

The described solution uses AWS Lambda to synchronize AWS WAF Rules with available reputation lists. Lambda automates the parsing of text-based IP reputation lists, the extracting of IP addresses contained within those lists, and updating the AWS WAF IP Sets in order to create a blacklist that blocks those addresses. Amazon CloudWatch Events executes the Lambda function on a regular schedule. To simplify the deployment, I will show you how to deploy this solution by using AWS CloudFormation.

The following diagram illustrates the process covered in this post.

Here is how the process works:

In addition to the reputation lists mentioned previously, you might want to include other lists maintained by a third party or by your organization. This post’s example Lambda function, written in Node.js JavaScript, supports the downloading of multiple lists and updating AWS WAF in a single Lambda execution. The Lambda function supports text-based lists with a single IP address or range specified per line. The function uses regular expressions to extract the IP address in either a.b.c.d dotted-decimal notation or a.b.c.d/n Classless Inter-Domain Routing (CIDR) notation, and supports an optional regular expression to match text that is present in the line before the address range. The function also consolidates ranges duplicated across multiple reputation lists and ranges that are contained within larger ranges. As an example, suppose we have two address ranges, 192.0.2.0/24 and 192.0.2.64/28. The second range is contained within the first, and therefore is not required in the combined list.

AWS WAF lets you apply a web access control list (web ACL) to a CloudFront distribution. A web ACL gives you fine-grained control over the web requests that your AWS resources respond to, and it can contain up to 10 rules. Each rule can specify multiple conditions that are logically ANDed to get a match in order to either Allow, Deny, or Count the incoming request. One of the conditions these rules can refer to is an AWS WAF IP Set. An IP Set defines up to 1,000 IP descriptors, which define the IP addresses and ranges in CIDR notation. Therefore, a single AWS WAF web ACL can block up to 10,000 IP address ranges in total.

The example Lambda function shards your reputation lists across multiple AWS WAF IP Sets that are made available to it, and prioritizes the list of IP addresses by size of ranges such that it blocks as many individual IP addresses as possible.

Now that I have explained how the Lambda function will process reputation lists, I will show how to use CloudFormation to create a stack consisting of the AWS WAF web ACL, Rules, and IP Sets, as well as the Lambda function, CloudWatch Events Rule, and supporting resources. The sample CloudFormation template defines two AWS WAF Rules and two IP Sets. You can modify the template to include more Rules and IP Sets in order to support a larger blacklist. The template also defines a CloudWatch Events Rule, which will execute the Lambda function every hour. You can alter the rate to a different value, but please respect the wishes of the reputation lists owners and do not request the lists too often.

Click Next and type a name for the stack.

I click Next and Next again. On the next page, I select the I acknowledge that this template might cause AWS CloudFormation to create IAM resources check box in order for the stack to create the IAM role assumed by the Lambda function. I click Create to create the stack.

I make a note of the physical ID for the Lambda function. In my example, it is called WAFReputationLists-LambdaFunction-PM6D5GNW6EDD, but yours may have a different ID. I will use this physical ID later to find the function in the Lambda console.

I then go to the Lambda console and select the Lambda function created by CloudFormation with the name mentioned in the previous paragraph. I click the Monitoring tab, and from here, I can monitor the execution of the function on an hourly basis. Note that it may take an hour for the first scheduled event to execute the function.

On the Monitoring tab, I click View logs in CloudWatch, which takes me to the CloudWatch console. Here, I can view the logs generated by the function using CloudWatch Logs, as shown in the following screenshot.

Attach the AWS WAF web ACL to a CloudFront distribution

To use the blacklist defined in my web ACL to protect my web application, I must attach the web ACL to a CloudFront distribution used to deliver the website via the CloudFront CDN.

I then click Edit. I select the web ACL to attach (I choose the web ACL I created with the stack earlier in this post), scroll to the bottom of the page, and click Yes, Edit to save changes.

I have attached the appropriate web ACL to the CloudFront distribution, which will allow me to use the blacklist to protect my web application.

In this post, I demonstrated how you can use AWS WAF to block the IP addresses used by bad actors. I did this by creating a Lambda function that imports IP addresses and ranges from multiple third-party IP reputation lists into AWS WAF, and scheduled the import using CloudWatch Events.The function processes the addresses defined in the lists into a format suitable for AWS WAF, removing duplicates and prioritizing the list to include as many IP addresses as possible. Subsequent requests to your web application (delivered by CloudFront) from IP addresses defined in this blacklist will be denied by AWS WAF.

The CloudFormation template and Lambda function package are available in the following S3 buckets that are located in the AWS regions that currently support Lambda:

The code and other WAF samples also are available in our GitHub aws-waf-sample repository.

If you have comments about this blog post, please submit them in the “Comments” section below. If you have questions about this solution or its implementation, please start a new thread on the AWS WAF forum.