The wheat field behind our house:

I really like this photo I made in the St.-Pauli-Elbtunnel in Hamburg:

I needed to pick a small, inexpensive, 2.0-compliant USB hub for myself,
and one for any of the users at my job who asked for one. I found
one, the “CP Technologies Hi-Speed USB 2.0 Hub”, which is part
number CP-UH-135. This worked great with GNU/Linux without any
trouble (using Linux 2.6.10 as distributed by Ubuntu), at least at first. 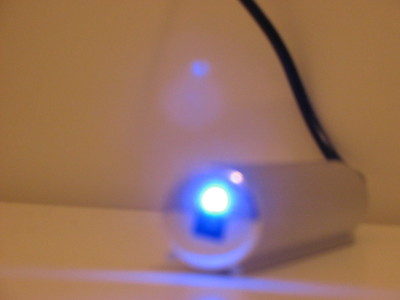 I used this hub without too much trouble for a number of months. Then,
one day, I plugged in a very standard PS-2 to USB converter (a
cable that takes a standard PS-2 mouse and PS-2 keyboard and makes
them show up as USB devices). The hub began to heat up and the
smell of burning electronics came from it. After a few weeks, the
hub began to generate serious USB errors from the kernel named
Linux, and I finally gave up on it. I don’t recommend this hub!

Finally, it has one additional annoying drawback for me: the blue LED
power light on the side of thing is incredibly distracting. I put a
small piece of black tape over it to block it, but it only helped a
little. Such a powerful power light on a small device like that is
highly annoying. I know geeks are really into these sorts of crazy
blue LEDs, but for my part, I always feel like I am about to be assimilated by a funky post-modern
Borg.

I am curious if there are any USB hubs out there that are more reliable
and don’t have annoying lights. I haven’t used USB hubs in the past
so I don’t know if a power LED is common. If you find one, I’d
encourage you to buy that one instead of this one. Almost anywhere
you put the thing on a desk, the LED catches your eye.

A few days ago, I acquired a number of IBM xSeries servers — namely x206
and x226 systems — for my work at the The Software Freedom Law
Center. We bought bare-metal, with just CPU and memory, with
plans to install drives ourselves.

I did that for a few reasons. First, serial ATA (S-ATA or SATA)
support under Linux has just become ready for prime time, and
despite being a SCSI-die-hard for most of my life, I’ve given in
that ATA’s price/performance ratio can’t really be beat, especially
if you don’t need hot swap or hardware RAID.

When I got the machines, which each came with one 80 GB S-ATA drive, I
found them well constructed, including a very easy mounting system
for hard drives. Drives have a blue plastic tray that looks like
this (follow link of image for higher resolution shot).

These so-called “EZ Swap” trays are not for hot-swap; the big IBM swap
trays with the lever are for that. This is just to mount and unmount
drives quickly. I was impressed, and was sad that, since IBM’s goal
is to resell you hard drives, they don’t make it easy to buy these
things outright. You have to look on IBM’s
parts and upgrade site for the x206, you’ll find that they offer
to sell 26K-7344, which is listed as a “SATA tray”, and a 73P-8007,
which is listed as a “Tray, SATA simple swap”. However, there is no
photo, and that part number does not match the part number on the item
itself. On the machines I got, the tray is numbered 73P-9591 (or
rather, P73P9591, but I think the “P” in the front is superfluous and
stands for “Part”).

It seemed to me strange that we had two things described as SATA tray
could be that different. And the difference in price was
substantial. It costs about US$28 for the 73P-8007 and around US$7
for the 26K-7344.

So, I called IBM spare parts division at +1-800-388-7080, and ordered
one of each. They arrived by DHL this morning. Lo and behold, they
are the very same item. I cannot tell the difference
between them upon close study. The only cosmetic difference is that
they are labeled with different part numbers. The cheaper one is
labeled 26K-7343 (one number less than what I ordered) and the other
is labeled 73P-9591 (the same number that my original SATA drives
came with).

When you call IBM’s spare parts division, they may give you some
trouble about ordering the part. When you call +1-800-388-7080,
they are expecting you to be an out-of-warranty customer, and make
it difficult for you to order. It depends on who you get, but you
can place an order with a credit card even without an “IBM
Out-of-Warranty Customer Number”. If you have a customer number you
got with your original IBM equipment order, that’s your warranty
customer number and is in a different database than the one used by
the IBM Spare Parts Division.

You can just tell them that you want to make a new order with a credit
card. After some trouble, they’ll do that.

[ This essay
was originally
published on gnu.org. ]

When I was in grade school, right here in the United States of America,
I was taught that our country was the “land of opportunity”. My teachers
told me that my country was special, because anyone with a good idea and a
drive to do good work could make a living, and be successful too. They
called it the “American Dream”.

What was the cornerstone to the “American Dream”? It was
equality — everyone had the same chance in our society to choose
their own way. I could have any career I wanted, and if I worked hard, I
would be successful.

I quickly discovered though, that in many cases, not all the players in
the field of computer software were equal. By the time I entered the
field, large companies like Microsoft tended to control much of the
technology. And, that technology was available to me under licensing
agreements that forbid me to study and learn from it. I was completely
prohibited from viewing the program source code of the software.

I found out, too, that those with lots of money could negotiate
different licenses. If they paid enough, they could get permission to
study and learn from the source code. Typically, such licenses cost many
thousands of dollars, and being young and relatively poor, I was out of
luck.

After spending my early years in the software business a bit
downtrodden by my inability to learn more, I eventually discovered another
body of software that did allow me to study and learn. This software was
released under a license called the GNU General Public License (GNU
GPL). Instead of restricting my freedom to study and learn from it, this
license was specifically designed to allow me to learn. The license
ensured that no matter what happened to the public versions of the
software, I’d always be able to study its source code.

I quickly built my career around this software. I got lots of work
configuring, installing, administering, and teaching about that
software. Thanks to the GNU GPL, I always knew that I could stay
competitive in my business, because I would always be able to learn easily
about new innovations as soon as they were made. This gave me a unique
ability to innovate myself. I could innovate quickly, and impress my
employers. I was even able to start my own consulting business. My own
business! The pinnacle of the American Dream!

Thus, I was quite surprised last week
when Jim Allchin, a
vice president at
Microsoft hinted
that
the
GNU GPL
contradicted
the
American Way.

The GNU GPL is specifically designed to make sure that all
technological innovators, programmers, and software users are given equal
footing. Each high school student, independent contractor, small business,
and large corporation are given an equal chance to innovate. We all start
the race from the same point. Those people with deep understanding of the
software and an ability to make it work well for others are most likely to
succeed, and they do succeed.

That is exactly what the American Way is about, at least the way I
learned it in grade school. I hope that we won’t let Microsoft and
others change the definition.

My thesis is nearly complete. I defend tomorrow, and as usual, I let
the deadline run up until the end. I just finished my slides for the
defense, and practiced once. I have some time in the schedule tomorrow to
practice at least once, although I have to find some empty room up at the
University to do it in.

I’ll be glad to be done. It’s been annoying to spend three or four
weeks here sitting around writing about perljvm, and not hacking on it. I
have a Cosource deadline coming up this week, so now’s a good a time as
any to release the first version of the Kawa-based perljvm.

I am really excited about how Kawa works, and how easy it is to massage
perl’s IR into Kawa’s IR. I got more excited about it as I wrote my thesis
defense talk. I really think great things can happen with Kawa in the
future.

Larry Wall is here, and we’ve had two dinners for the Cincinnati
GNU/Linux Users’ Group (who paid Larry’s way to come here). I was there,
and Larry was asking some hard-ish questions about Kawa. Not hard exactly,
just things I didn’t know. I began to realize how much I have focused on
the Kawa API, and I haven’t really been digging in the internals. I told
him I’d try to have some answers about it for my defense, and I will
likely reread Bothner’s papers on the subject tomorrow to get familiar
with how he deals with various issues.

It’s odd having Larry on my thesis committee. I otherwise wouldn’t be
nervous in the least, but I am quite worried with him on the
committee.

Anyway, so I defend tommorrow, then it’s into perljvm hacking again
right away on Tuesday to make the Cosource deadline, and then I have to
finish preparing my Perl tutorial for LinuxExpo Paris.

Tonight, I finished the actual document of my Master’s thesis. I had to
vet it by reading it out loud, about three times. I have a real hard time
finding subtle grammar errors. I believe that when I read, I parse them
out in my head. Reading out loud usually helps, but it wasn’t working so
well this time. (The first draft had many errors, even though I read it
out loud.)

This time, I went through it twice, reading it out loud while bouncing
the mouse along each word. This seemed to help a lot, as I was catching
errors left and right. I hope I got them all.

I sent the final document off to the committee. I haven’t heard from
Larry Wall, whose an external member of my committee, at all. I haven’t
heard from since we set up the plane tickets months ago. I am sure he’s
insanely busy, and that’s likely why. No big deal, I suppose, I am just
overly nervous.

I really need to get to the actually hacking on perljvm. I have lost
three weeks working on the thesis document, which is really only
describing things, not hacking. While I’ll be glad, I’m sure, to have the
Master’s thesis done, but perljvm needs some hacking done on it,
especially considering that I have a Cosource deadline to meet soon.