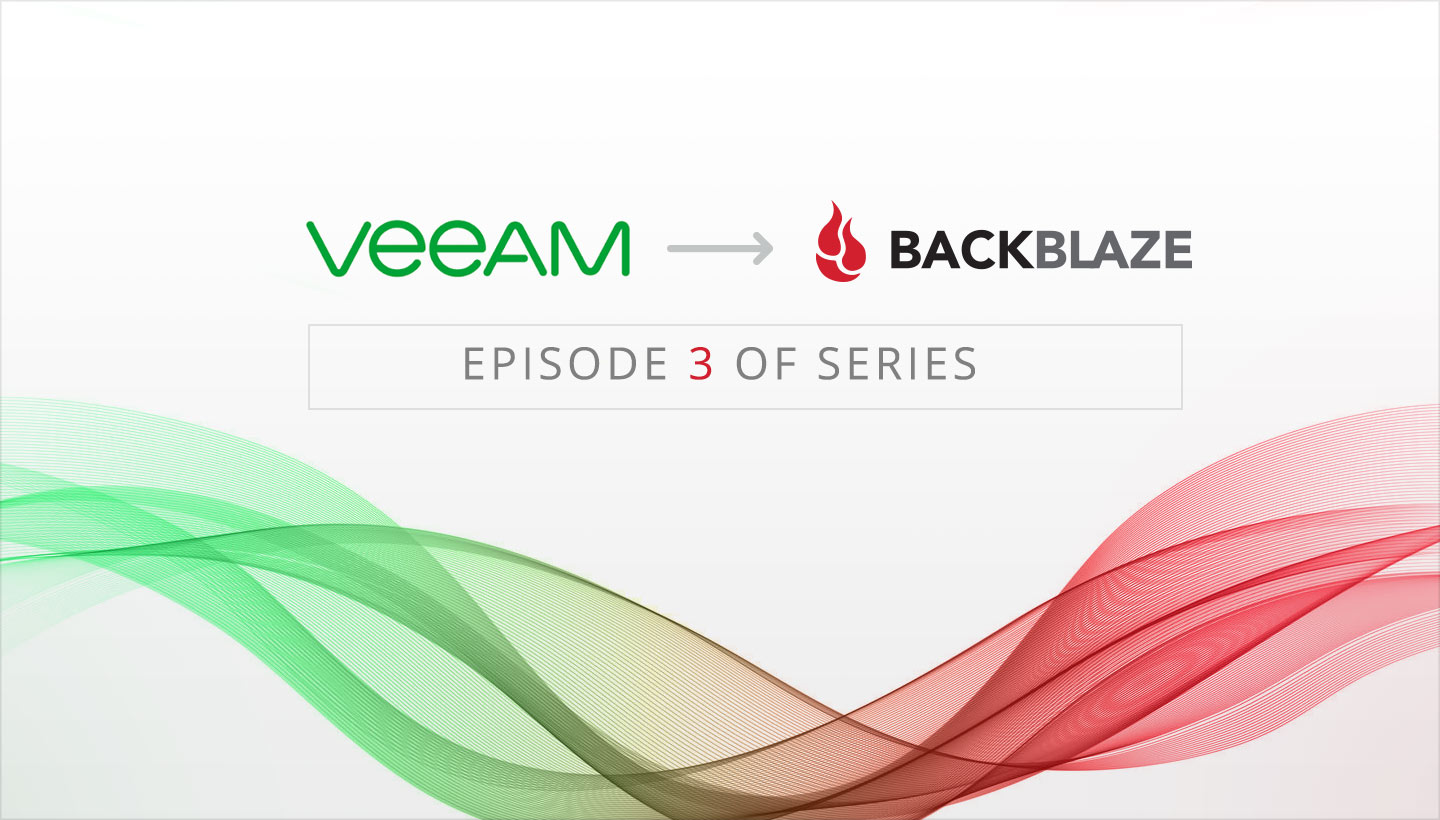 Deduplication is simply the process of eliminating redundant data on disk. Deduplication reduces storage space requirements, improves backup speed, and lowers backup storage costs. The dedup field used to be dominated by a few big-name vendors who sold dedup systems that were too expensive for most of the SMB market. Then an open-source challenger came along in OpenDedup, a project that produced the Space Deduplication File System (SDFS). SDFS provides many of the features of commercial dedup products without their cost.

OpenDedup provides inline deduplication that can be used with applications such as Veeam, Veritas Backup Exec, and Veritas NetBackup.

Why use Veeam with OpenDedup to Backblaze B2?

With your VMs backed up to B2, you have a number of options to recover from a disaster. If the unexpected occurs, you can quickly restore your VMs from B2 to the location of your choosing. You also have the option to bring up cloud compute through B2’s compute partners, thereby minimizing any loss of service and ensuring business continuity.

Backblaze’s B2 is an ideal solution for backing up Veeam’s backup repository due to B2’s combination of low-cost and high availability. Users of B2 save up to 75% compared to other cloud solutions such as Microsoft Azure, Amazon AWS, or Google Cloud Storage. When combined with OpenDedup’s no-cost deduplication, you’re got an efficient and economical solution for backing up VMs to the cloud.

How to Use OpenDedup with B2

For step-by-step instructions for how to set up OpenDedup for use with B2 on Windows or Linux, see Backblaze B2 Enabled on the OpenDedup website.

Are you backing up Veeam to B2 using one of the solutions we’ve written about in this series? If you have, we’d love to hear from you in the comments. 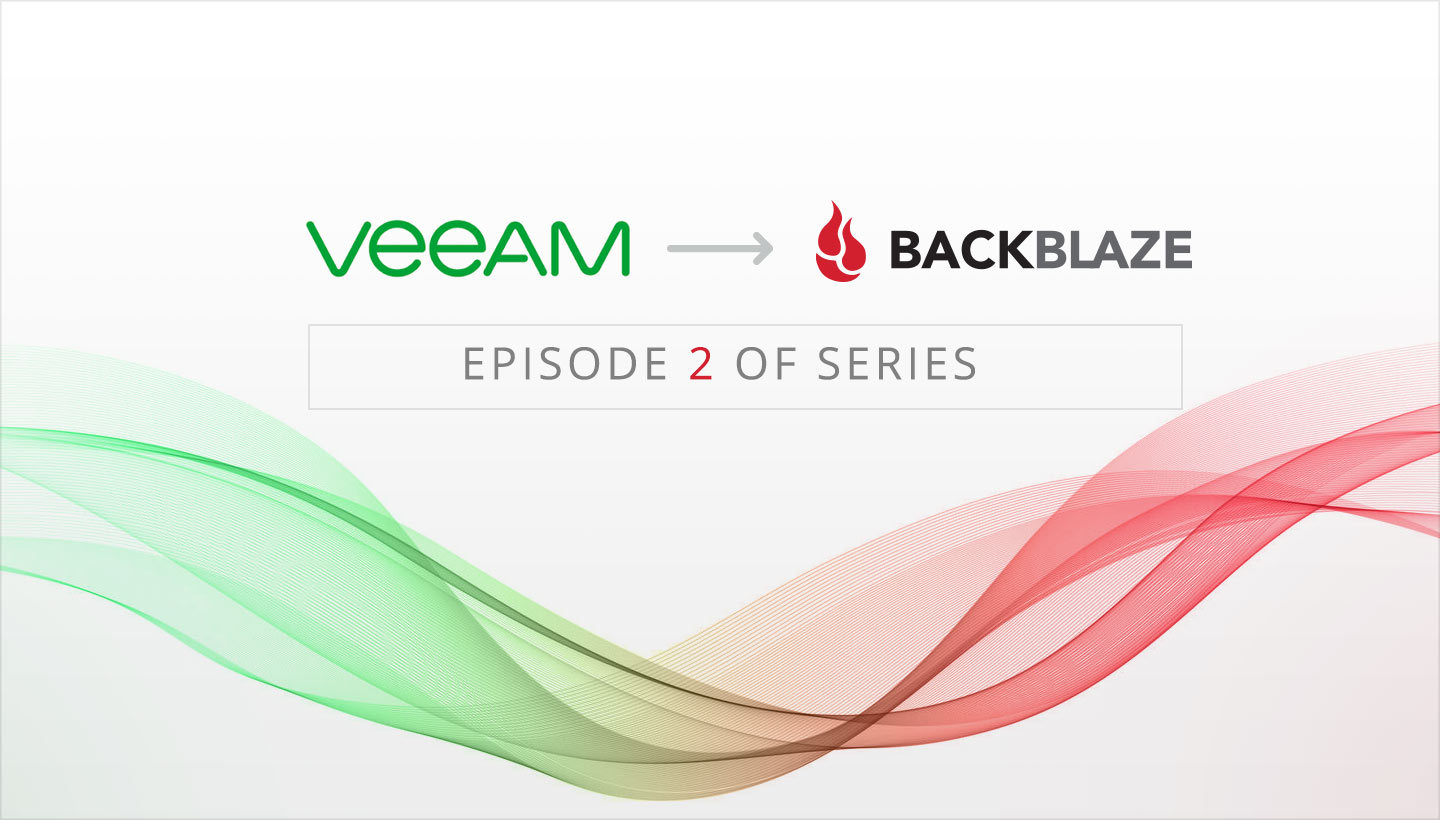 In the first post in this series, we discussed how to connect Veeam to the B2 cloud using Synology. In this post, we continue our Veeam/B2 series with a discussion of how to back up Veeam to the Backblaze B2 Cloud using StarWind VTL.

StarWind provides “VTL” (Virtual Tape Library) technology that enables users to back up their “VMs” (virtual machines) from Veeam to on-premise or cloud storage. StarWind does this using standard “LTO” (Linear Tape-Open) protocols. This appeals to organizations that have LTO in place since it allows adoption of more scalable, cost efficient cloud storage without having to update the internal backup infrastructure.

Why An Additional Backup in the Cloud?

Common backup strategy, known as 3-2-1, dictates having three copies at a minimum of active data. Two copies are stored locally and one copy is in another location.

Relying solely on on-site redundancy does not guarantee data protection after a catastrophic or temporary loss of service affecting the primary data center. To reach maximum data security, an on-premises private cloud backup combined with an off-site public cloud backup, known as hybrid cloud, provides the best combination of security and rapid recovery when required.

Why Consider a Hybrid Cloud Solution?

Having a backup strategy that combines on-premise storage with public cloud storage in a single or multi-cloud configuration is becoming the solution of choice for organizations that wish to eliminate dependence on vulnerable on-premises storage. It also provides reliable and rapidly deployed recovery when needed.

If an organization requires restoration of service as quickly as possible after an outage or disaster, it needs to have a backup that isn’t dependent on the same network. That means a backup stored in the cloud that can be restored to another location or cloud-based compute service and put into service immediately after an outage.

Some organizations will already have made a significant investment in software and hardware that supports LTO protocols. Specifically, they are using Veeam to back up their VMs onto physical tape. Using StarWind to act as a VTL with Veeam enables users to save time and money by connecting their on-premises Veeam Backup & Replication archives to Backblaze B2 Cloud Storage.

Why Veeam, StarWind VTL, and Backblaze B2?

What are the primary reasons that an organization would want to adopt Veeam + StarWind VTL + B2 as a hybrid cloud backup solution?

Having a backup in the cloud with B2 provides an economical primary or secondary cloud storage solution and enables fast restoration to a current or alternate location, as well as providing the option to quickly bring online a cloud-based compute service, thereby minimizing any loss of service and ensuring business continuity. Backblaze’s B2 is an ideal solution for backing up Veeam’s backup repository due to B2’s combination of low-cost and high availability compared to other cloud solutions such as Microsoft Azure or Amazon AWS.

Using Veeam, StarWind VTL, and Backblaze B2 cloud storage is a superior alternative to tape as B2 offers better economics, instant access, and faster recovery.

I thought I’d write up some notes.

You don’t have to worry if you patch. If you download the latest update from Microsoft, Apple, or Linux, then the problem is fixed for you and you don’t have to worry. If you aren’t up to date, then there’s a lot of other nasties out there you should probably also be worrying about. I mention this because while this bug is big in the news, it’s probably not news the average consumer needs to concern themselves with.

Don’t worry about the performance hit. Some, especially avid gamers, are concerned about the claims of “30%” performance reduction when applying the patch. That’s only in some rare cases, so you shouldn’t worry too much about it. As far as I can tell, 3D games aren’t likely to see less than 1% performance degradation. If you imagine your game is suddenly slower after the patch, then something else broke it.

This wasn’t foreseeable. A common cliche is that such bugs happen because people don’t take security seriously, or that they are taking “shortcuts”. That’s not the case here. Speculative execution and timing issues with caches are inherent issues with CPU hardware. “Fixing” this would make CPUs run ten times slower. Thus, while we can tweek hardware going forward, the larger change will be in software.

There’s no good way to disclose this. The cybersecurity industry has a process for coordinating the release of such bugs, which appears to have broken down. In truth, it didn’t. Once Linus announced a security patch that would degrade performance of the Linux kernel, we knew the coming bug was going to be Big. Looking at the Linux patch, tracking backwards to the bug was only a matter of time. Hence, the release of this information was a bit sooner than some wanted. This is to be expected, and is nothing to be upset about.

It helps to have a name. Many are offended by the crassness of naming vulnerabilities and giving them logos. On the other hand, we are going to be talking about these bugs for the next decade. Having a recognizable name, rather than a hard-to-remember number, is useful.

Should I stop buying Intel? Intel has the worst of the bugs here. On the other hand, ARM and AMD alternatives have their own problems. Many want to deploy ARM servers in their data centers, but these are likely to expose bugs you don’t see on x86 servers. The software fix, “page table isolation”, seems to work, so there might not be anything to worry about. On the other hand, holding up purchases because of “fear” of this bug is a good way to squeeze price reductions out of your vendor. Conversely, later generation CPUs, “Haswell” and even “Skylake” seem to have the least performance degradation, so it might be time to upgrade older servers to newer processors.

Intel misleads. Intel has a press release that implies they are not impacted any worse than others. This is wrong: the “Meltdown” issue appears to apply only to Intel CPUs. I don’t like such marketing crap, so I mention it.