Long-time readers will remember Penguin Lifelines, one of our very favourite projects from back in the mists of time (which is to say 2014 — we have short memories around here). 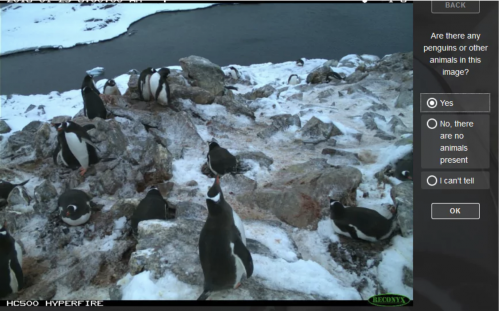 Penguin Lifelines was a programme run by the Zoological Society of London, crowdsourcing the tracking of penguin colonies in Antarctica. It’s since evolved into something called Penguin Watch, now working with the World Wildlife Fund (WWF) and British Antarctic Survey (BAS). It’s citizen science on a big scale: thousands of people from all over the world come together on the internet to…click on penguins. By counting the birds in their colonies, users help penguinologists measure changes in the birds’ behaviour and habitat, and in the larger ecosystem, thus assisting in their conservation.

The penguin people say this about Penguin Watch:

Some of these colonies are so difficult to get to that they haven’t been visited for 50 years! The images contain unprecedented detail, giving us the opportunity to gather new data on the number of penguins in the region. This information will help us understand how they are being affected by climate change, the potential impact of local fisheries, and how we can help conserve these incredible species.

Pis in the coldest, wildest place

And what are those special cameras? The static ones providing time-lapse images are Raspberry Pi Camera Modules, mounted on Raspberry Pi Zeros, and we’re really proud to see just how robust they’ve been in the face of Antarctic winters.

These things are incredibly tough. They’re the same cameras that Alasdair and colleagues have been sticking on turtles, at depths of down to 500m; I can’t think of a better set of tests for robustness.

Want to get involved? Head over to Penguin Watch, and get clicking! We warn you, though — it’s a little addictive.