It’s been a long lockdown for one of our favourite makers, Pi & Chips. Like most of us (probably), they have turned their hand to training small animals that wander into their garden to pass the time — in this case, pigeons. I myself enjoy raising my glass to the squirrel that runs along my back fence every evening at 7pm.

Of course, Pi & Chips has taken this one step further and created a food dispenser including motion-activated camera with a Raspberry Pi 3B+ to test the intelligence of these garden critters and capture their efforts live.

Looking into the cognitive behaviour of birds (and finding the brilliantly titled paper Maladaptive gambling by pigeons), Pi & Chips discovered that pigeons can, with practice, recognise objects including buttons and then make the mental leap to realise that touching these buttons actually results in something happening. So they set about building a project to see this in action.

Enter the ‘SmartFrank 3000’, named after the bossiest bird to grace Pi & Chips’s shed roof over the summer.

The build itself is a simple combo of a switch and dispenser. But it quickly became apparent that any old servo wasn’t going to be up to the job — it couldn’t move fast enough to open and close a hatch quickly or strongly enough.

Running a few tests with a stepper motor confirmed that this was the perfect choice, as it could move quickly enough, and was strong enough to hold back a fair weight of seed when not in operation.

A 3D-printed flap for the stepper was also fashioned, plus a nozzle that fits over the neck of a two-litre drinks bottle, and some laser-cut pieces to make a frame to hold it all together.

Now for the switch that Frank the pigeon was going to have to touch if it wanted any bird seed. Pi & Chips came up with this design made from 3mm ply and some sponge as the spring.

They soldered some wires to a spring clip from an old photo frame and added a bolt and two nuts. The second nut allowed very fine adjustment of the distance to make sure the switch could be triggered by as light a touch as possible.

Behind the scenes there’s a Raspberry Pi 3B+ running the show, together with a motor controller board for the stepper motor. This board runs from its own battery pack, as it needs 12V power and is therefore too heavy for Raspberry Pi to handle directly. A Raspberry Pi Camera Module has also been added and runs this motion detection script to start recording whenever a likely bird candidate steps up to the plate for dinner. Hopefully, we can soon get some footage of Frank the pigeon learning and earning!

Last week, lots and lots of you shared your Raspberry Pi builds with us on social media using the hashtag #IUseMyRaspberryPiFor. Jay Wainwright from Liverpool noticed the conversation and got in touch to tell us about The Nest Box, which uses Raspberry Pi to bring impressively high-quality images and video from British bird boxes to your Facebook feed. 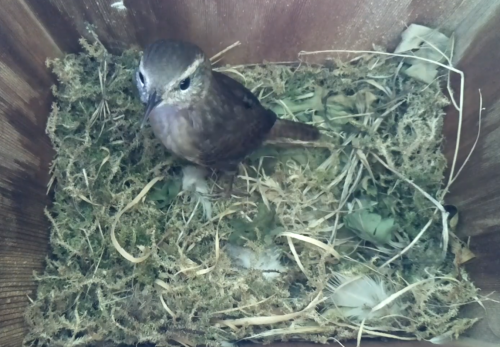 Jay runs a small network of livestreaming nest box cameras, with three currently sited and another three in the pipeline; excitingly, the new ones will include a kestrel box and a barn owl box! During the spring, all the cameras stream live to The Nest Box’s Facebook page, which has steadily built a solid following of several thousand wildlife fans. 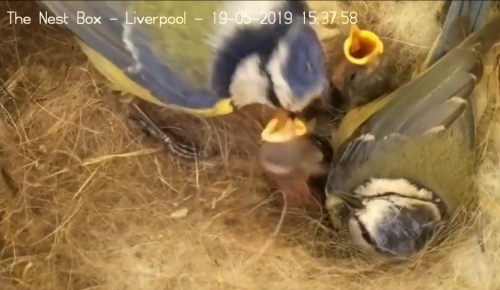 The Nest Box’s setup uses a Raspberry Pi and Camera Module, along with a Raspberry Pi PoE HAT to provide both power and internet connectivity, so there’s only one cable connection to weatherproof. There’s also a custom HAT that Jay has designed to control LED lights and to govern the Raspberry Pi Camera Module’s IR filter, ensuring high-quality images both during the day and at night. To top it all off, he has written some Python code to record visitors to the nest boxes and go into live streaming mode whenever the action is happening.

As we can see from this nest box design for swifts, shown on the project’s crowdfunding profile, plenty of thought has evidently been put into the design of the boxes so that they provide tempting quarters for their feathered occupants while also accommodating all the electronic components. 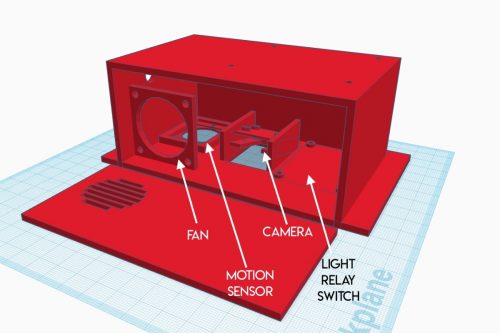 Follow The Nest Box on Facebook to add British birds into your social media mix — whatever you’ve got now, I’ll bet all tomorrow’s coffees that it’ll be an improvement. And if you’re using Raspberry Pi for a wildlife project, or you’ve got plans along those lines, let us know in the comments.