Robert O’Callahan notes
an important development in the fight for media codecs without patent
issues. “Apple joining the Alliance for Open Media is a really big
deal. Now all the most powerful tech companies — Google, Microsoft, Apple,
Mozilla, Facebook, Amazon, Intel, AMD, ARM, Nvidia — plus content providers
like Netflix and Hulu are on board. I guess there’s still no guarantee
Apple products will support AV1, but it would seem pointless for Apple to
join AOM if they’re not going to use it: apparently AOM membership obliges
Apple to provide a royalty-free license to any ‘essential patents’ it holds
for AV1 usage.”

Halloween: that glorious time of year when you’re officially allowed to make your friends jump out of their skin with your pranks. For those among us who enjoy dressing up, Halloween is also the occasion to go all out with costumes. And so, dear reader, we present to you: a steampunk tentacle hat, created by Derek Woodroffe.

Derek is an engineer who loves all things electronics. He’s part of Extreme Kits, and he runs the website Extreme Electronics. Raspberry Pi Zero-controlled Tesla coils are Derek’s speciality — he’s even been on one of the Royal Institution’s Christmas Lectures with them! Skip ahead to 15:06 in this video to see Derek in action:

Let There Be Light! // 2016 CHRISTMAS LECTURES with Saiful Islam – Lecture 1

Wearables are electronically augmented items you can wear. They might take the form of spy eyeglasses, clothes with integrated sensors, or, in this case, headgear adorned with mechanised tentacles.

Why did Derek make this? We’re not entirely sure, but we suspect he’s a fan of the Cthulu mythos. In any case, we were a little astounded by his project. This is how we reacted when Derek tweeted us about it:

In fact, we had to recover from a fit of laughter before we actually managed to type this answer.

Derek made the ‘skeleton’ of each tentacle out of a net curtain spring, acrylic rings, and four lengths of fishing line. Two servomotors connect to two ends of fishing line each, and pull them to move the tentacle. 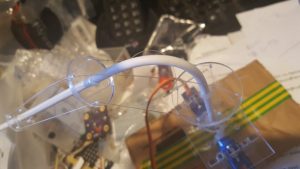 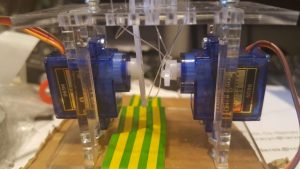 Then he covered the tentacles with nylon stockings and liquid latex, glued suckers cut out of MDF onto them, and mounted them on an acrylic base. The eight motors connect to a Raspberry Pi via an I2C 8-port PWM controller board. 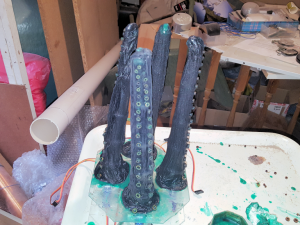 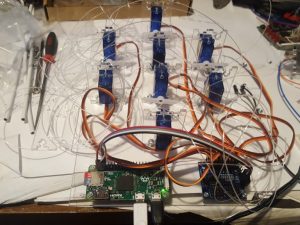 The Pi makes the servos pull the tentacles so that they move in sine waves in both the x and y directions, seemingly of their own accord. Derek cut open the top of a hat to insert the mounted tentacles, and he used more liquid latex to give the whole thing a slimy-looking finish. 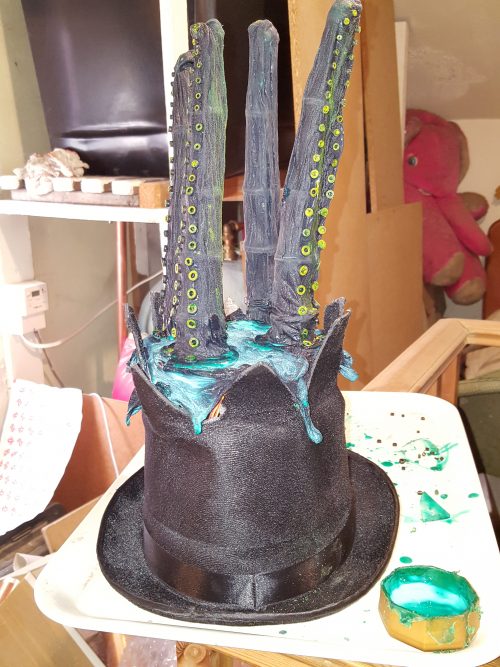 You can read more about Derek’s steampunk tentacle hat here. He will be at the Beeston Raspberry Jam in November to show off his build, so if you’re in the Nottingham area, why not drop by?

This build is already pretty creepy, but just imagine it with a sensor- or camera-powered upgrade that makes the tentacles reach for people nearby. You’d have nightmare fodder for weeks.

With the help of the Raspberry Pi, any Halloween costume can be taken to the next level. How could Pi technology help you to win that coveted ‘Scariest costume’ prize this year? Tell us your ideas in the comments, and be sure to share pictures of you in your get-up with us on Twitter, Facebook, or Instagram.