On my holidays this year I enjoyed a walk in the Brecon Beacons. We set out nice and early, walked 22km through some of the best scenery in Britain, got a cup of tea from the snack van on the A470, and caught our bus home. “I enjoyed that walk,” I thought, “and I’d like to do one like it again.” What I DIDN’T think was, “I’d like to do that walk again, only I’d like it to be nearly three times as long, and it definitely ought to have about three times more ascent, or else why bother?”

Alan Peaty is a bit more hardcore than me, so, a couple of weekends ago, he set out on the Brecon Beacons 10 Peaks Ultramarathon: “10 peaks; 58 kilometres; 3000m of ascent; 24 hours”. He went with his friend Neil and a Raspberry Pi Zero in an eyecatching 3D-printed case. 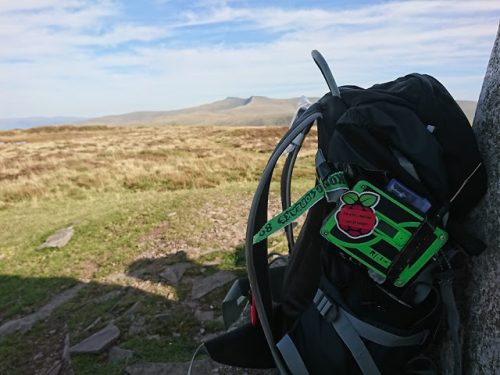 “The brick”, nestling on a backpack, with sunlit Corn Du and Pen y Fan in the background

The Raspberry Pi Zero ensemble – lovingly known as the brick or, to give it its longer name, the Rosie IoT Brick or RIoT Brick – is equipped with a u-blox Neo-6 GPS module, and it also receives GPS tracking info from some smaller trackers built using ESP32 microcontrollers. The whole lot is powered by a “rather weighty” 20,000mAh battery pack. Both the Raspberry Pi and the ESP32s were equipped with “all manner of additional sensors” to track location, temperature, humidity, pressure, altitude, and light level readings along the route.

Via LoRa and occasional 3G/4G from the many, many peaks along the route, all this data ends up on Amazon Web Services. AWS, among other things, hosts an informative website where family members were able to keep track of Alan’s progress along windswept ridges and up 1:2 gradients, presumably the better to appreciate their cups of tea and central heating. Here’s a big diagram of how the kit that completed the ultramarathon fits together; it’s full of arrows, dotted lines, and acronyms.

Alan, Neil, the brick, and the rest of their gear completed the event in an impressive 18 hours and one minute, for which they got a medal. 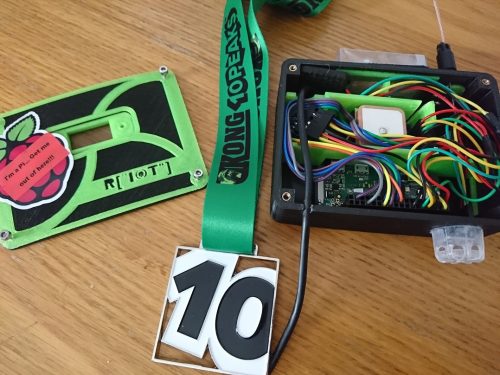 You can follow the adventures of this project, its antecedents, and the further evolutions that are doubtless to come, on the Rosie the Red Robot Twitter feed. And you can find everything to do with the project in this GitHub repository, so you can complete ultramarathons while weighed down with hefty power bricks and bristling with homemade tracking devices, too, if you like. Alan is raising money for Alzheimer’s Research UK with this event, and you can find his Brecon Beacons 10 Peaks JustGiving page here.