Launched in 2010, Google’s Chrome Store is the go-to place for people looking to pimp their Chrome browser.

Often referred to as apps and extensions, the programs offered by the platform run in Chrome and can perform a dazzling array of functions, from improving security and privacy, to streaming video or adding magnet links to torrent sites.

Also available on the Chrome Store are themes, which can be installed locally to change the appearance of the Chrome browser.

While there are certainly plenty to choose from, some additions to the store over the past couple of months are not what most people have come to expect from the add-on platform. 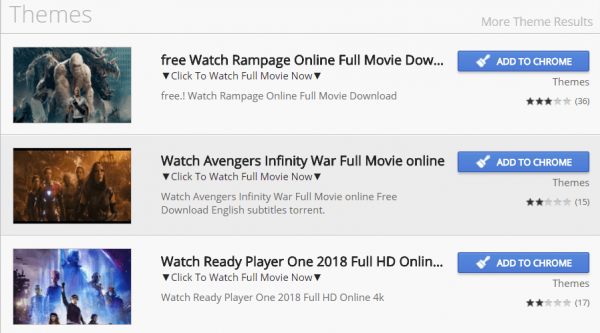 As the image above suggests, unknown third parties appear to be exploiting the Chrome Store’s ‘theme’ section to offer visitors access to a wide range of pirate movies including Black Panther, Avengers: Infinity War and Rampage.

When clicking through to the page offering Ready Player One, for example, users are presented with a theme that apparently allows them to watch the movie online in “Full HD Online 4k.”

Of course, the whole scheme is a dubious scam which eventually leads users to Vioos.co, a platform that tries very hard to give the impression of being a pirate streaming portal but actually provides nothing of use.

Nothing to see here 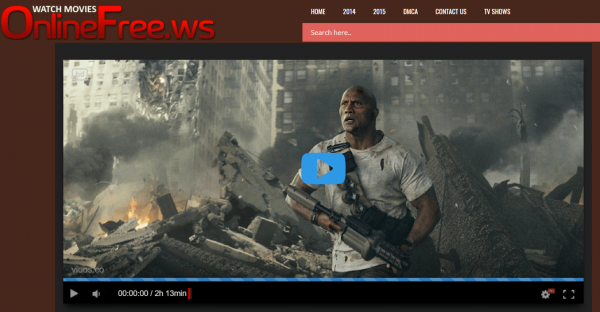 In fact, as soon as one clicks the play button on movies appearing on Vioos.co, visitors are re-directed to another site called Zumastar which asks people to “create a free account” to “access unlimited downloads & streaming.”

“With over 20 million titles, Zumastar is your number one entertainment resource. Join hundreds of thousands of satisfied members and enjoy the hottest movies,” the site promises.

With this kind of marketing, perhaps we should think about this offer for a second. Done. No thanks.

In extended testing, some visits to Vioos.co resulted in a redirection to EtnaMedia.net, a domain that was immediately blocked by MalwareBytes due to suspected fraud. However, after allowing the browser to make the connection, TF was presented with another apparent subscription site.

We didn’t follow through with a sign-up but further searches revealed upset former customers complaining of money being taken from their credit cards when they didn’t expect that to happen.

Quite how many people have signed up to Zumastar or EtnaMedia via this convoluted route from Google’s Chrome Store isn’t clear but a worrying number appear to have installed the ‘themes’ (if that’s what they are) offered on each ‘pirate movie’ page.

At the time of writing the ‘free Watch Rampage Online Full Movie’ ‘theme’ has 2,196 users, the “Watch Avengers Infinity War Full Movie” variant has 974, the ‘Watch Ready Player One 2018 Full HD’ page has 1,031, and the ‘Watch Black Panther Online Free 123putlocker’ ‘theme’ has more than 1,800. Clearly, a worrying number of people will click and install just about anything.

We haven’t tested the supposed themes to see what they do but it’s a cast-iron guarantee that they don’t offer the movies displayed and there’s always a chance they’ll do something awful. As a rule of thumb, it’s nearly always wise to steer clear of anything with “full movie” in the title, they can rarely be trusted.

Finally, those hoping to get some guidance on quality from the reviews on the Chrome Store will be bitterly disappointed.

In an excellent post pointing out Wikileaks deserves none of the credit given them in the #MacronLeaks, the author erroneously stated that after Archive.org took down the files, that Wikileaks provided links to a second archive. This is not true. Instead, Wikileaks simply pointed to what’s known as “magnet links” of the first archive. Understanding magnet links is critical to understanding all these links and dumps, so I thought I’d describe them.

The tl;dr version is this: anything published via BitTorrent has a matching “magnet link” address, and the contents can still be reached via magnet links when the original publisher goes away.

In this case, the leaker uploaded to “archive.org”, a popular Internet archiving resource. This website allows you to either download files directly, which is slow, or via peer-to-peer using BitTorrent, which is fast. As you know, BitTorrent works by all the downloaders exchanging pieces with each other, rather getting them from the server. I give you a piece you don’t have, in exchange for a piece I don’t have.

BitTorrent, though still requires a “torrent” (a ~30k file that lists all the pieces) and a “tracker” (http://bt1.archive.org:6969/announce) that keeps a list of all the peers so they can find each other. The tracker also makes sure that every piece is available from at least one peer.

When “archive.org” realized what was happening, they deleted the leaked files, the torrent, and the tracking.

However, BitTorrent has another feature called “magnet links”. This is simply the “hash” of the “torrent” file contents, which looks something like “06724742e86176c0ec82e294d299fba4aa28901a“. (This isn’t a hash of the entire file, but just the important parts, such as the filenames and sizes).

If somebody decides they want to download the BitTorrent with that hash, they broadcast that request throughout this “distributed hash” network until they find one or more people with the full torrent. They then get the torrent description file from them, and also a list of peers in the “swarm” who are downloading the file.

In this case, one of the leaked documents was a 2.3 gigabyte file called “langannerch.rar”. The torrent description file called “langanerch_archive.torrent” is 26 kilobytes in size. The hash (magnet link) is 16 bytes in size, written “magnet:?xt=urn:btih:06724742e86176c0ec82e294d299fba4aa28901a“. If you’ve got BitTorrent software installed and click on the link, you’ll join the swarm and start downloading the file, even though the original torrent/tracker/files have gone away.

According to my BitTorrent client, there are currently 108 people in the swarm downloading this file world-wide. I’m currently connected to 11 of them. Most of them appear to be located in France. 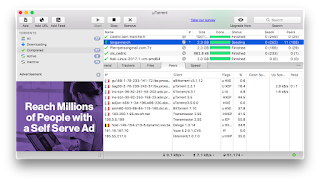 Looking at the General tab, I see that “availability” is 2.95. That means there exist 2.95 complete copies of the download. In other words, if there are 20 pieces, it means that for one of the pieces in the swarm, only 2 people have it. This is dangerously small — if those two people leave the network, then a complete copy of the dump will no longer exist in the swarm, and it’ll be impossible to download it all. 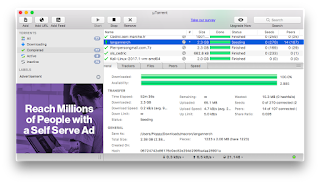 Such dumps can remain popular enough for years after the original tracker/torrent has disappeared, but at some point, a critical piece disappears, and it becomes impossible for anybody to download more than 99.95%, with everyone in the swarm waiting for that last piece. If you read this blogpost 6 months from now, you are likely to see 10 people in the swarm, all stuck at 99.95% complete.

The upshot of this is that it’s hard censoring BitTorrent, because all torrents also exist as magnet links. It took only a couple hours for Archive.org to take down the tracker/torrents/files, but after complete downloads were out in the swarm, all anybody needed was the hash of the original torrent to create a magnet link to the data. Those magnet links had already been published by many people. The Wikileaks tweet that linked to them was fairly late, all things considered, other people had already published them.