Data is the soul of an application. As containers make it easier to package and deploy applications faster, testing plays an even more important role in the reliable delivery of software. Given that all applications have data, development teams want a way to reliably control, move, and test using real application data or, at times, obfuscated data.

For many teams, moving application data through a CI/CD pipeline, while honoring compliance and maintaining separation of concerns, has been a manual task that doesn’t scale. At best, it is limited to a few applications, and is not portable across environments. The goal should be to make running and testing stateful containers (think databases and message buses where operations are tracked) as easy as with stateless (such as with web front ends where they are often not).

Why is state important in testing scenarios? One reason is that many bugs manifest only when code is tested against real data. For example, we might simply want to test a database schema upgrade but a small synthetic dataset does not exercise the critical, finer corner cases in complex business logic. If we want true end-to-end testing, we need to be able to easily manage our data or state.

In this blog post, we define a CI/CD pipeline reference architecture that can automate data movement between applications. We also provide the steps to follow to configure the CI/CD pipeline.

As part of continuous integration, testing, and deployment, a team may need to reproduce a bug found in production against a staging setup. Here, the hosting environment is comprised of a cluster with Kubernetes as the scheduler and Portworx for persistent volumes. The testing workflow is then automated by AWS CodeCommit, AWS CodePipeline, and AWS CodeBuild.

Portworx offers Kubernetes storage that can be used to make persistent volumes portable between AWS environments and pipelines. The addition of Portworx to the AWS Developer Tools continuous deployment for Kubernetes reference architecture adds persistent storage and storage orchestration to a Kubernetes cluster. The example uses MongoDB as the demonstration of a stateful application. In practice, the workflow applies to any containerized application such as Cassandra, MySQL, Kafka, and Elasticsearch.

Without the Portworx integrations, a manual process would require an application-level backup of the database instance that is outside of the CI/CD process. For larger databases, this could take hours and impact production. The use of block-based snapshots follows best practices for resilient and non-disruptive backups. 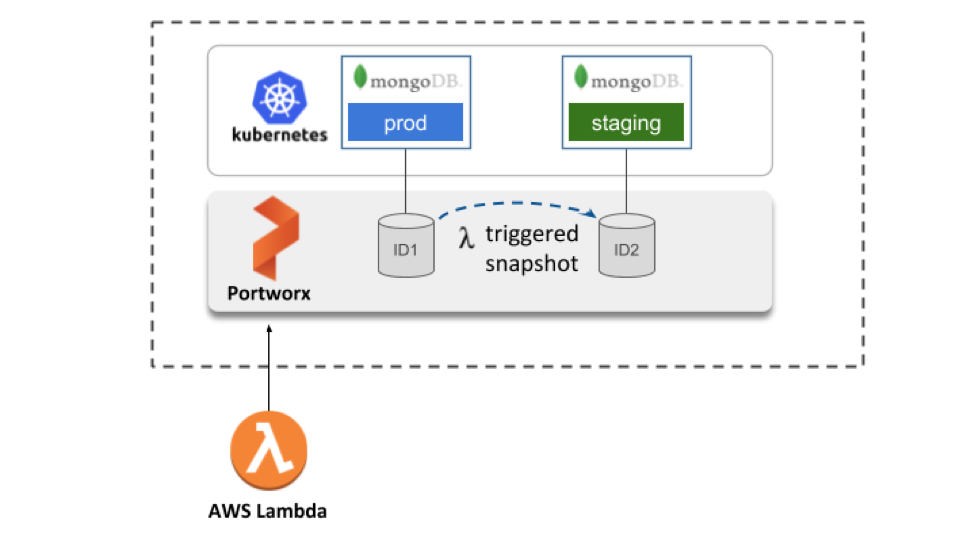 In the following workflow, a developer is testing changes to a containerized application that calls on MongoDB. The tests are performed against a staging instance of MongoDB. The same workflow applies if changes were on the server side. The original production deployment is scheduled as a Kubernetes deployment object and uses Portworx as the storage for the persistent volume. 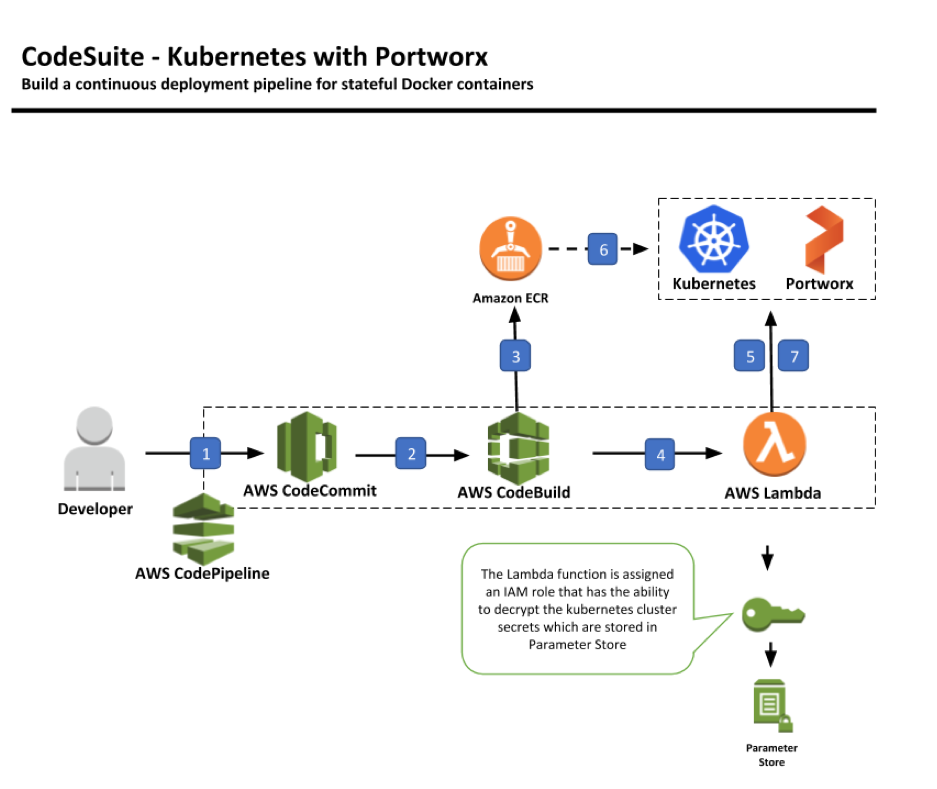 This reference architecture showcases how development teams can easily move data between production and staging for the purposes of testing. Instead of taking application-specific manual steps, all operations in this CodePipeline architecture are automated and tracked as part of the CI/CD process.

This integrated experience is part of making stateful containers as easy as stateless. With AWS CodePipeline for CI/CD process, developers can easily deploy stateful containers onto a Kubernetes cluster with Portworx storage and automate data movement within their process.

The reference architecture and code are available on GitHub:

At re:Invent 2014, we announced AWS Lambda, what is now the center of the serverless platform at AWS, and helped ignite the trend of companies building serverless applications.

This year, at re:Invent 2017, the topic of serverless was everywhere. We were incredibly excited to see the energy from everyone attending 7 workshops, 15 chalk talks, 20 skills sessions and 27 breakout sessions. Many of these sessions were repeated due to high demand, so we are happy to summarize and provide links to the recordings and slides of these sessions.

Over the course of the week leading up to and then the week of re:Invent, we also had over 15 new features and capabilities across a number of serverless services, including AWS Lambda, Amazon API Gateway, AWS [email protected], AWS SAM, and the newly announced AWS Serverless Application Repository!

[email protected] now supports content-based dynamic origin selection, network calls from viewer events, and advanced response generation. This combination of capabilities greatly increases the use cases for [email protected], such as allowing you to send requests to different origins based on request information, showing selective content based on authentication, and dynamically watermarking images for each viewer.

Here are some of the other highlights that you might have missed. We think these could help you make great applications:

Coming up with the right mix of talks for an event like this can be quite a challenge. The Product, Marketing, and Developer Advocacy teams for Serverless at AWS spent weeks reading through dozens of talk ideas to boil it down to the final list.

From feedback at other AWS events and webinars, we knew that customers were looking for talks that focused on concrete examples of solving problems with serverless, how to perform common tasks such as deployment, CI/CD, monitoring, and troubleshooting, and to see customer and partner examples solving real world problems. To that extent we tried to settle on a good mix based on attendee experience and provide a track full of rich content.

Below are the recordings and slides of breakout sessions from re:Invent 2017. We’ve organized them for those getting started, those who are already beginning to build serverless applications, and the experts out there already running them at scale. Some of the videos and slides haven’t been posted yet, and so we will update this list as they become available.

Talks for people new to Serverless

Talks for specific use cases

Looking to get hands-on with Serverless?

At re:Invent, we delivered instructor-led skills sessions to help attendees new to serverless applications get started quickly. The content from these sessions is already online and you can do the hands-on labs yourself!
Build a Serverless web application

As I have noted in the past, the AWS Blog Team is working hard to make sure that you know about as many AWS launches and publications as possible, without totally burying you in content! As part of our balancing act, we will occasionally publish catch-up posts to clear our queues and to bring more information to your attention. Here’s what I have in store for you today:

Monitoring for Cross-Region Replication of S3 Objects
I told you about cross-region replication for S3 a couple of years ago. As I showed you at the time, you simply enable versioning for the source bucket and then choose a destination region and bucket. You can check the replication status manually, or you can create an inventory (daily or weekly) of the source and destination buckets.

The Cross-Region Replication Monitor (CRR Monitor for short) solution checks the replication status of objects across regions and gives you metrics and failure notifications in near real-time. 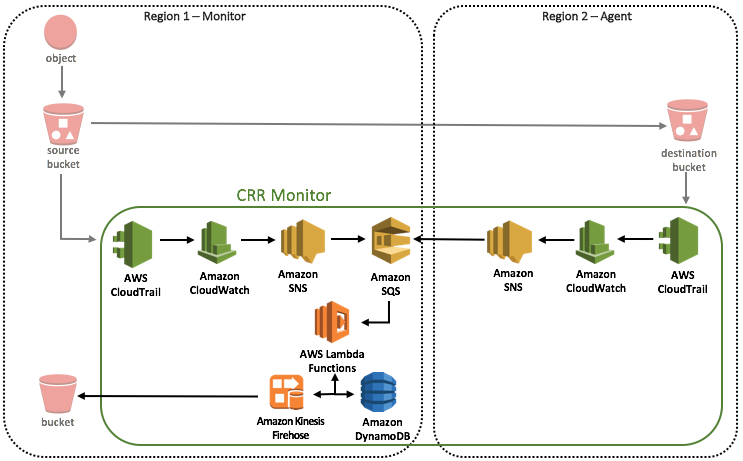 Tags for Spot Instances
Spot Instances and Spot Fleets (collections of Spot Instances) give you access to spare compute capacity. We recently gave you the ability to enter tags (key/value pairs) as part of your spot requests and to have those tags applied to the EC2 instances launched to fulfill the request:

PCI DSS Compliance for 12 More Services
As first announced on the AWS Security Blog, we recently added 12 more services to our PCI DSS compliance program, raising the total number of in-scope services to 42. To learn more, check out our Compliance Resources.

HIPAA Eligibility for WorkDocs
In other compliance news, we announced that Amazon WorkDocs has achieved HIPAA eligibility and PCI DSS compliance in all AWS Regions where WorkDocs is available.

VPC Resizing
This feature allows you to extend an existing Virtual Private Cloud (VPC) by adding additional blocks of addresses. This gives you more flexibility and should help you to deal with growth. You can add up to four secondary /16 CIDRs per VPC. You can also edit the secondary CIDRs by deleting them and adding new ones. Simply select the VPC and choose Edit CIDRs from the menu: 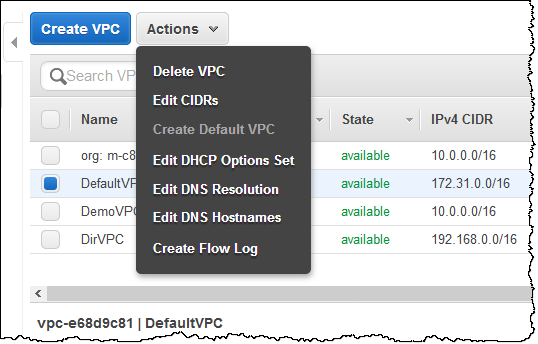 Then add or remove CIDR blocks as desired: 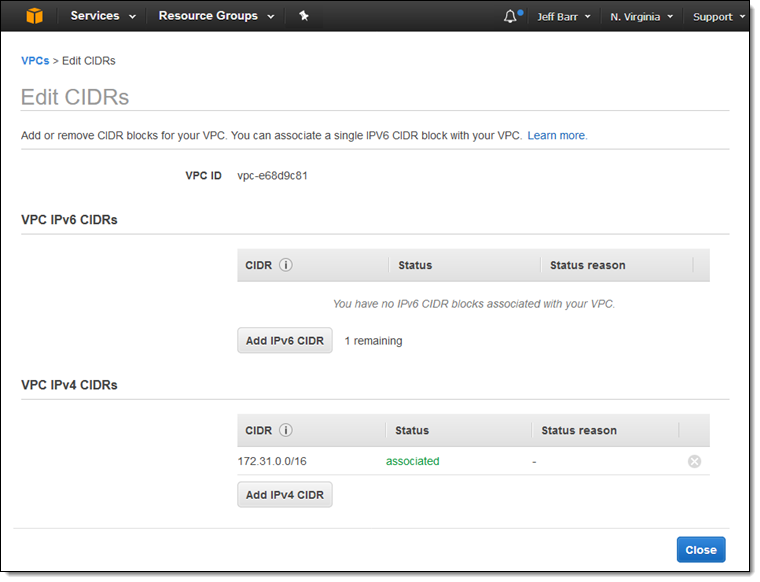 To learn more, read about VPCs and Subnets.

AppStream 2.0 Graphics Design Instances
Powered by AMD FirePro S7150x2 Server GPUs and equipped with AMD Multiuser GPU technology, the new Graphics Design instances for Amazon AppStream 2.0 will let you run and stream graphics applications more cost-effectively than ever. The instances are available in four sizes, with 2-16 vCPUs and 7.5 GB to 61 GB of memory.

The new AMS integration App for ServiceNow lets you interact with AMS from within ServiceNow, with no need for any custom development or API integration. 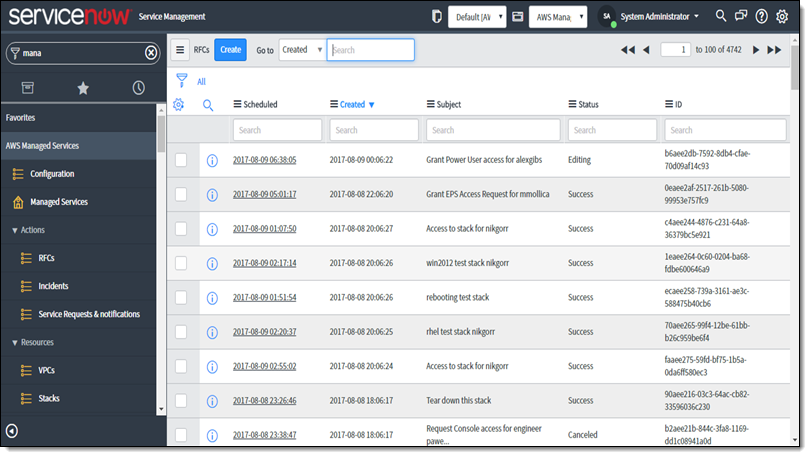 Regtech in the Cloud
Regtech (as I learned while writing this), is short for regulatory technology, and is all about using innovative technology such as cloud computing, analytics, and machine learning to address regulatory challenges.

Working together with APN Consulting Partner Cognizant, TABB Group recently published a thought leadership paper that explains why regulations and compliance pose huge challenges for our customers in the financial services, and shows how AWS can help! 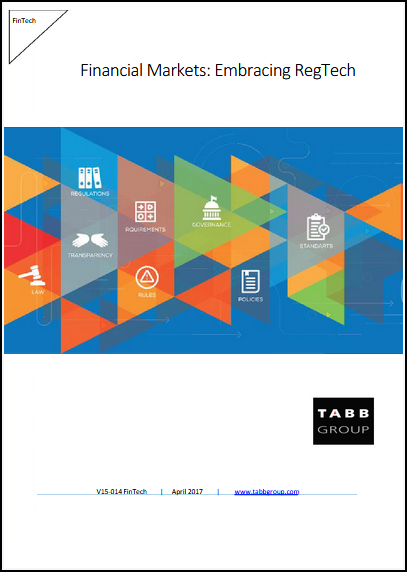 New & Revised Quick Starts
Our Quick Starts team has been cranking out new solutions and making significant updates to the existing ones. Here’s a roster:

And that’s all I have for today!

Mongoose OS is an open-source
operating system for tiny embedded systems. It is designed to run on
devices such as microcontrollers, which are often constrained with memory on the
order of tens of kilobytes, while exposing a programming interface that
provides access to modern APIs normally found on more powerful devices. A
device running Mongoose OS has access to operating system functionality
such as filesystems and networking, plus higher-level software such as a
JavaScript engine and cloud access APIs.

Plane spotting, like train spotting, is a hobby enjoyed by many a tech enthusiast. Nick Sypteras has built a voice-controlled plane identifier using a Raspberry Pi and an Amazon Echo Dot. 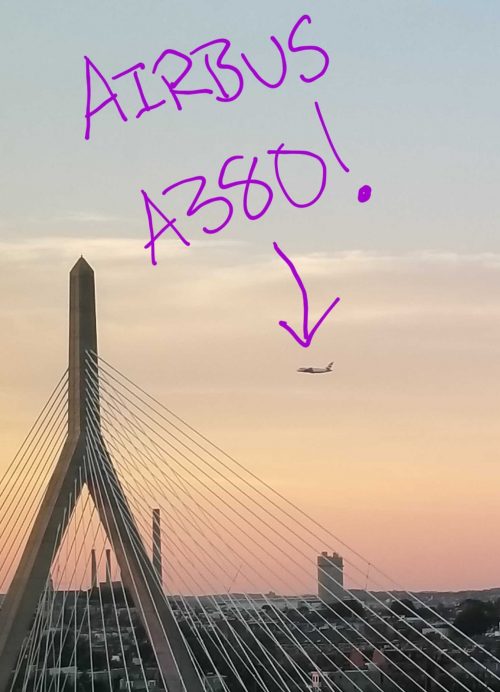 What plane is that?

There’s a great write-up on Nick’s blog describing how he went about this. In addition to the Pi and the Echo, all he needed was a radio receiver to pick up signals from individual planes. So he bought an RTL-SDR USB dongle to pick up ADS-B broadcasts.

With the help of open-source software he can convert aircraft broadcasts into JSON data, which is stored on the Pi. Included in the broadcast is each passing plane’s unique ICAO code. Using this identifier, he looks up model, operator, and registration number in a data set of possible aircraft which he downloaded and stored on the Pi as a Mongo database.

Where is that plane going?

His Python script, with the help of the Beautiful Soup package, parses the FlightRadar24 website to find out the origin and destination of each plane. Nick also created a Node.js server in which all this data is stored in human-readable language to be accessed by Alexa.

Finally, it was a matter of setting up a new skill on the Alexa Skills Kit dashboard so that it would query the Pi in response to the right voice command.

Nick has made all his code available on GitHub, so head on over if this make has piqued your interest. He mentions that the radio receiver he uses picks up most unencrypted broadcasts, so you could adapt his build for other purposes as well.

Boost your hobby with the Pi

We’ve seen many builds by makers who have pushed their hobby to the next level with the help of the Pi, whether it’s astronomy, high-altitude ballooning, or making music. What hobby do you have that the Pi could improve? Let us know in the comments.