(Spoiler alert: spoilers regarding a 1950s science fiction short story that you may
not have read appear in this blog post.)

Mitchell
Baker announced
today that Mozilla Corporation (or maybe Mozilla Foundation? She doesn’t
really say…) will begin implementing proprietary software by default
in Firefox at the behest of wealthy and powerful media companies.
Baker argues this serves users: that Orwellian phrasing caught
my attention most. 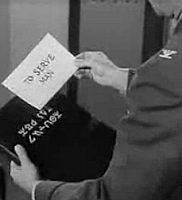 In the old science
fiction story, To Serve Man (which later was adapted for the
The Twilight Zone), aliens come to earth and freely share
various technological advances, and offer free visits to the alien world.
Eventually, the narrator, who remains skeptical, begins translating one of
their books. The title is innocuous, and even well-meaning: To Serve Man. Only
too late does the narrator realize that the book isn’t about service to
mankind, but rather — a cookbook.

It’s in the same spirit that Baker seeks to serve Firefox’s users
up on a platter to the MPAA, the RIAA, and like-minded wealthy for-profit
corporations. Baker’s only defense appears to be that other browser
vendors have done the same, and cites specifically for-profit companies such as
Apple, Google, and Microsoft.

Theoretically speaking, though, the Mozilla Foundation is supposed to be a
501(c)(3)
non-profit charity which told the IRS its charitable purpose was:
to keep the Internet a universal platform that is accessible by anyone
from anywhere, using any computer, and … develop open-source
Internet applications. Baker fails to explain how switching Firefox to
include proprietary software fits that mission. In fact, with a bit of
revisionist history, she says that open source was merely an
“approach” that Mozilla Foundation was using, not their
mission.

Of course, Mozilla Foundation is actually a thin non-profit shell wrapped
around a much larger entity called the Mozilla Corporation, which is a for-profit
company. I have always been dubious about this structure,
and actions like this that make it obvious that “Mozilla”
is focused on being a for-profit company, competing with other for-profit
companies, rather than a charity serving the public (at least, in the way
that I mean “serving”).

Meanwhile, I greatly appreciate that various Free Software communities
maintain forks and/or alternative wrappers around many web browser
technologies, which, like Firefox, succumb easily to for-profit corporate
control. This process (such as Debian’s iceweasel fork and GNOME’s
ephiphany interface to Webkit) provide an nice “canary in the
coalmine” to confirm there is enough software-freedom-respecting code
still released to make these browsers usable by those who care about
software freedom and reject the digital restrictions management that
Mozilla now embraces. OTOH, the one item that Baker is right about: given
that so few people oppose proprietary software, there soon may not be much
of a web left for those of us who stand firmly for software freedom.
Sadly, Mozilla announced today their plans to depart from curtailing that
distopia and will instead help accelerate its onset.

My
comment on Gerv’s blog post, which criticizes this one.
FSF’s
condemnation of Mozilla’s support of DRM