Do you encrypt your Amazon Machine Instances (AMIs) with AWS Key Management Service (AWS KMS) customer master keys (CMKs) for regulatory or compliance reasons? Do you launch instances with encrypted root volumes? Do you create a golden AMI and distribute it to other accounts in your organization for standardizing application-specific Amazon Elastic Compute Cloud (Amazon EC2) instance launches? If so, then we have good news for you!

We’re happy to announce that you can now share AMIs encrypted with customer-managed CMKs across accounts with a single API call. Additionally, you can launch an EC2 instance directly from an encrypted AMI that has been shared with you. Previously, this was possible for unencrypted AMIs only. Extending this capability to encrypted AMIs simplifies your AMI distribution process and reduces the snapshot storage cost associated with the older method of sharing encrypted AMIs that resulted in a copy in each of your accounts.

In this post, we demonstrate how you can share an encrypted AMI between accounts and launch an encrypted, Amazon Elastic Block Store (Amazon EBS) backed EC2 instance from the shared AMI.

Prerequisites for sharing AMIs encrypted with a customer-managed CMK

Before you can begin sharing the encrypted AMI and launching an instance from it, you’ll need to set up your AWS KMS key policy and AWS Identity and Access Management (IAM) policies.

For this walkthrough, you need two AWS accounts:

Once you’ve configured the source account, you need to configure the target account. The IAM user or role in the target account needs to be able to perform the AWS KMS DescribeKey, CreateGrant, ReEncrypt* and Decrypt operations on cmkSource in order to launch an instance from a shared encrypted AMI. The following JSON policy document shows an example of these permissions:

Launch an instance from the shared encrypted AMI

To launch an AMI that was shared with you, set the AMI ID of the shared AMI in the image-id parameter of Run-Instances API/CLI. Optionally, to re-encrypt the volumes with a custom CMK in your account, you can specify the KmsKeyId in the Block Device Mapping as follows:

Where the mapping.json contains the following:

While launching the instance from a shared encrypted AMI, you can specify a CMK of your choice. You may also choose cmkSource to encrypt volumes in your account. However, we recommend that you re-encrypt the volumes using a CMK in the target account. This protects you if the source CMK is compromised, or if the source account revokes permissions, which could cause you to lose access to any encrypted volumes you created using cmkSource.

In this blog post, we discussed how you can easily share encrypted AMIs across accounts to launch encrypted instances. AWS has extended the same capabilities to snapshots, allowing you to create encrypted EBS volumes from shared encrypted snapshots.

An Amazon Machine Image (AMI) provides the information that you need to launch an instance (a virtual server) in your AWS environment. There are a number of AMIs on the AWS Marketplace (such as Amazon Linux, Red Hat or Ubuntu) that you can use to launch an Amazon Elastic Compute Cloud (Amazon EC2) instance. When you launch an instance from these AMIs, the resulting volumes are unencrypted. However, for regulatory purposes or internal compliance reasons, you might need to launch instances with encrypted root volumes. Previously, this required you to follow a a multi-step process in which you maintained a separate, encrypted copy of the AMI in your account in order to launch instances with encrypted volumes. Now, you no longer need to maintain multiple AMI copies for encryption. To launch an encrypted Amazon Elastic Block Store (Amazon EBS) backed instance from an unencrypted AMI, you can directly specify the encryption properties in your existing workflow (such as with the RunInstances API or the Launch Instance Wizard). This simplifies the process of launching instances with encrypted volumes and reduces your associated AMI storage costs.

In this post, we demonstrate how you can start from an unencrypted AMI and launch an encrypted EBS-backed Amazon EC2 instance. We’ll show you how to do this from both the AWS Management Console, and using the RunInstances API with the AWS Command Line Interface (AWS CLI).

Launching an instance from the AWS Management Console

Launching an instance from the RunInstances API

For example, to launch an encrypted instance from an Amazon Linux AMI with an additional empty 100 GB of data volume (/dev/sdb), the API call would be as follows:

Where the mapping.json contains the following:

You may specify different keys for different volumes. Providing a kmsKeyID without the encryption flag will result in an API error. 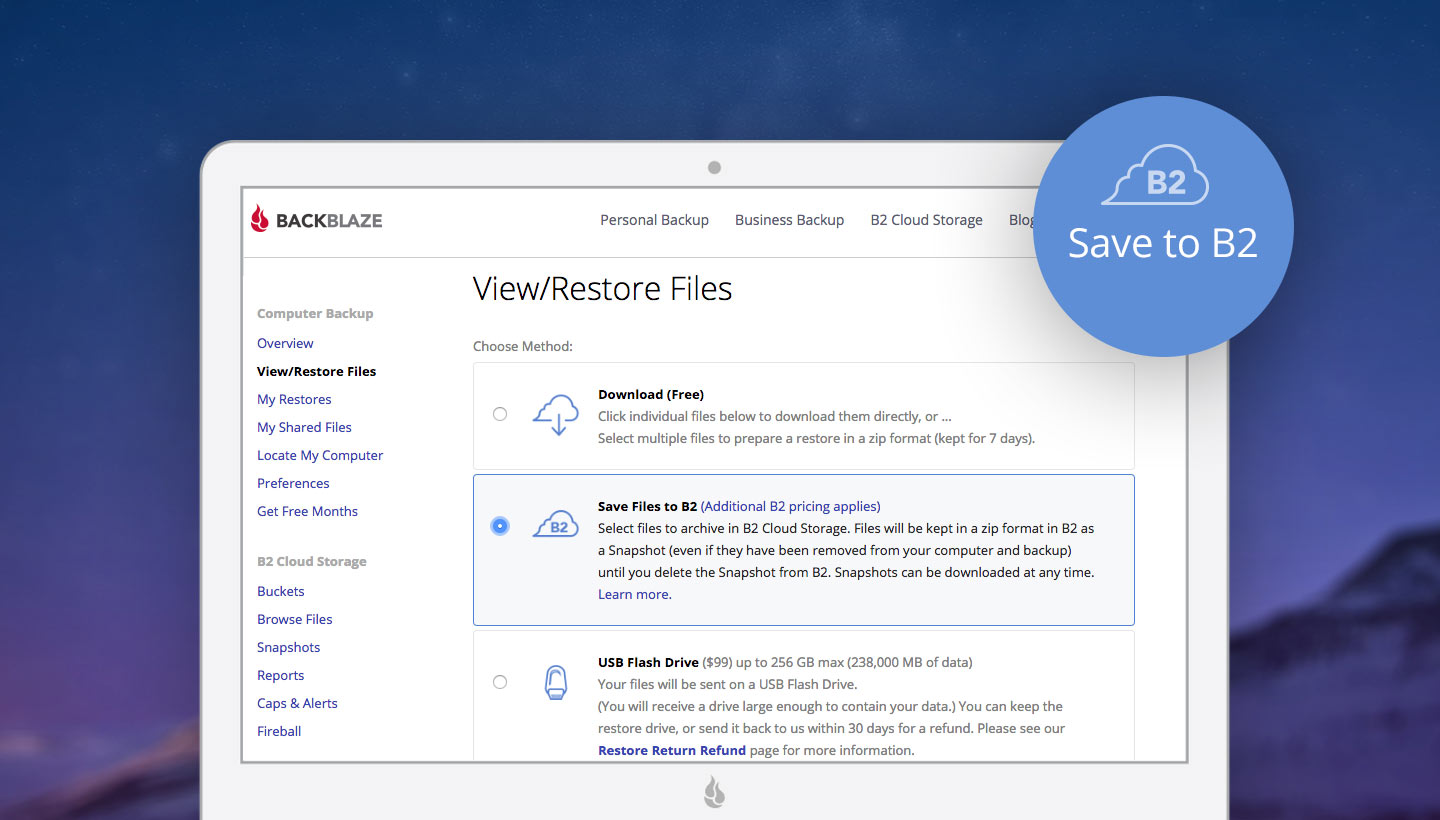 Customers have often told us that they’d love a way to save data directly from their Backblaze Computer Backup account to B2 Cloud Storage. Some want to freeze a set of records in time, others want to preserve the state of a directory or system as it existed at a specific moment. Still others simply want to remove data from their local drive but have the assurance that it is safely stored in the cloud.

We listened to these requests and are happy to say that we’ve added this capability in our just released 6.0 update of Backblaze Computer Backup. Users can now select B2 Cloud Storage as a destination to save Snapshots from their backup account during the restore process.

This capability lets customers do a number of new things, like keep a copy of their old computer’s data even when migrating to a new one, save a collection of files (e.g. last year’s emails, a completed work project, your novel draft, tax returns) in the cloud as an archive, or free up space on a hard drive by moving data to a Snapshot in B2 and then deleting the original copy. Just like files in Computer Backup, the B2 Snapshot can be downloaded over the internet or delivered anywhere on a USB flash or hard drive.

No More Connecting Your External Drives Every 30 Days

This new feature can particularly benefit users who have been using Computer Backup to back up data from multiple external drives. Often, these external drives are not always connected to their computers, and to maintain the backups they have been required to connect these drives at least once every 30 days so that they’re active and therefore maintained in their backup — a task they tell us they’d rather avoid.

Now, with the ability to save a restore to B2, these customers can take a Snapshot of the data already backed up from these drives and save it to a B2 account. They can save as many Snapshots as they wish, thereby saving the state of the drive as it existed in one moment for as long as they wish to retain it.

Snapshots are stored at economical B2 rates: $0.005 gigabyte/month and $0.01 gigabyte for downloads. Customers get an instant cost estimate when a Snapshot is prepared from Backblaze Backup to B2.

What is B2 Cloud Storage?

B2 is Backblaze’s low cost and high performance cloud storage. It can be used to store data for as short or as long a period as you require. The data in B2 is retrievable without delay from anywhere at any time.

B2 is different from Backblaze Computer Backup in that B2 can be used to store whatever data you want and you have complete control of how long it is retained. Our Computer Backup service offers unlimited backup of the data on your Mac or Windows computer using the Backblaze client software. B2, in contrast, can be accessed through the account dashboard or used with any of a number of applications chosen by the user, or accessed through various programming interfaces or from a computer’s command line. For more on pricing, see our pricing page and calculator for B2.

How Does Saving a Restore to B2 Work?

Files in your Computer Backup can be zipped and archived to a Snapshot that is stored in B2 Cloud Storage. These selected files will be safe in B2 until the Snapshot is removed by the user, even if the files have been deleted from the computer and the backup. 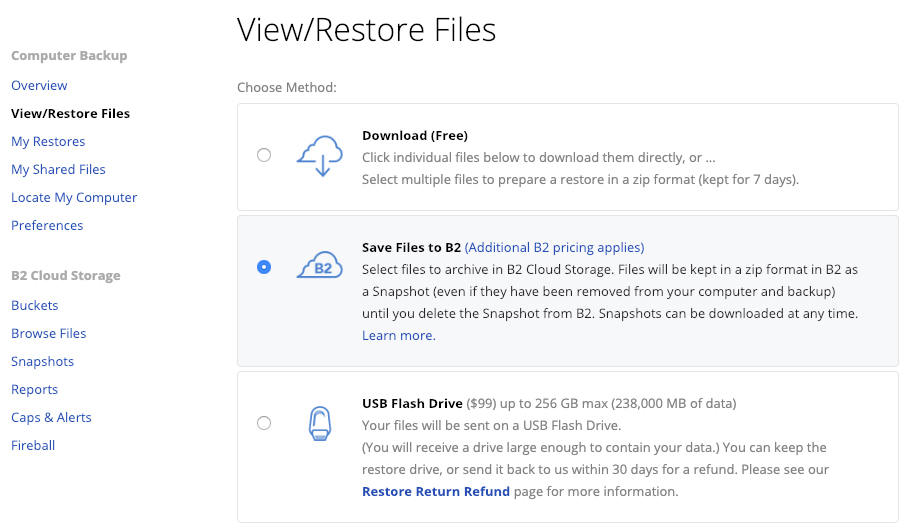 The user gets an instant estimate of the cost to store the Snapshot in B2. 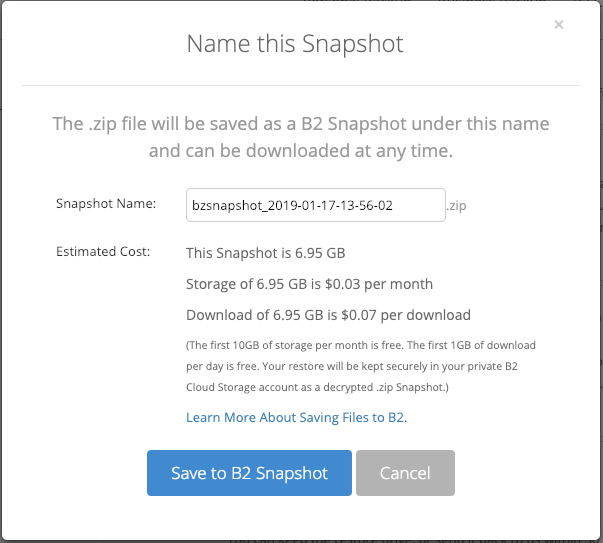 The user receives a notice when the Snapshot is created and stored. 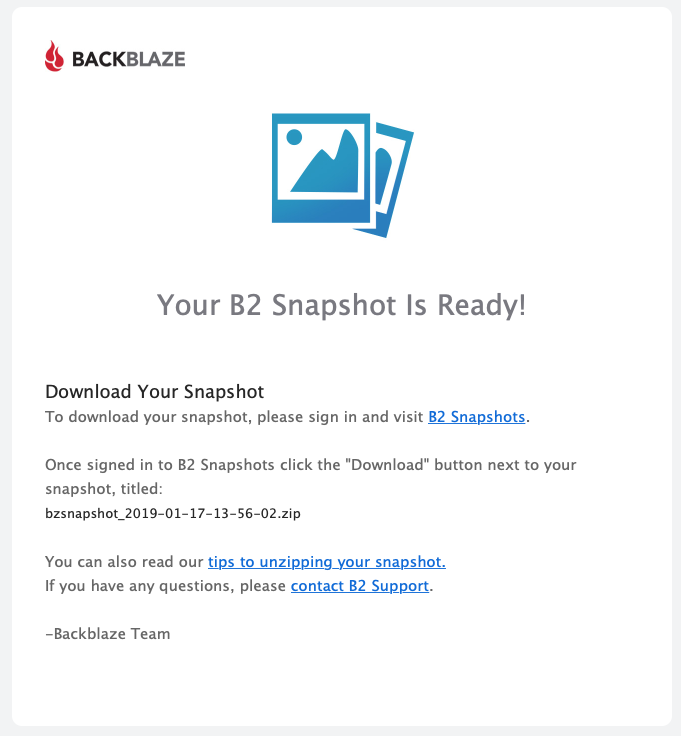 Notice that Snapshot has been created

An unlimited number of restores can be saved and retained as B2 Snapshots for any length of time desired.The user’s account dashboard shows all the Snapshots that have been created, and gives options to download or remove the Snapshot. A Snapshot can be downloaded directly from B2 to a user’s computer or shipped to customers on a USB flash or hard drive. And, when returned within 30 days, the cost of the flash or hard drive is completely refundable, just like with regular restores. 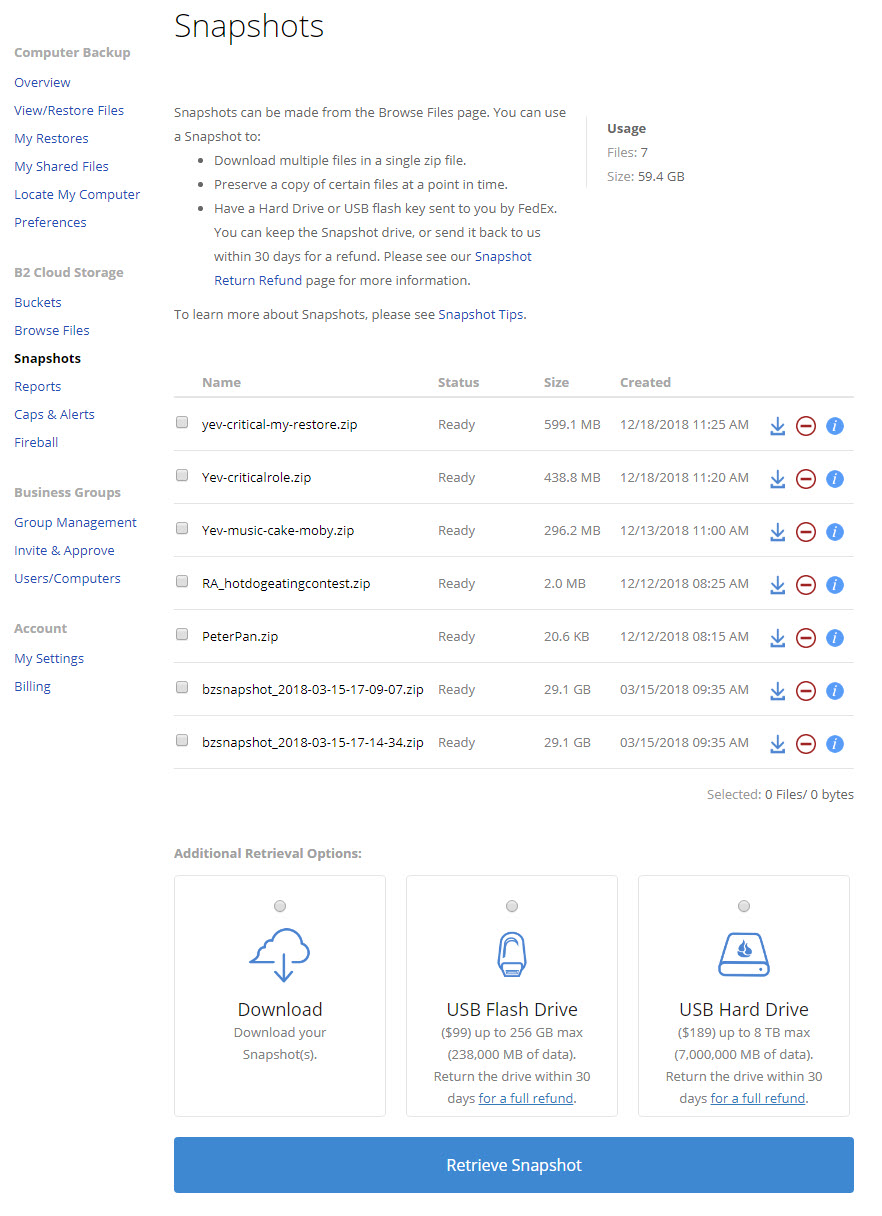 User account page showing status of Snapshots in B2

We hope you’ll try out this new capability and let us know how you’re using it.

For more tips on saving data to B2 Snapshots, read our help article, Saving Files to B2 from Computer Backup, or sign up for our free webinar on Backblaze Backup v6.0 on January 30, 2019, at 11am PST.

The post Save Data Directly to B2 With Backblaze Cloud Backup 6.0 appeared first on Backblaze Blog | Cloud Storage & Cloud Backup.