Jennifer Fox is back, this time with a Raspberry Pi Zero–controlled impact force monitor that will notify you if your collision is a worth a trip to the doctor.

Check out my latest Hacker in Residence project for SparkFun Electronics: the Helmet Guardian! It’s a Pi Zero powered impact force monitor that turns on an LED if your head/body experiences a potentially dangerous impact. Install in your sports helmets, bicycle, or car to keep track of impact and inform you when it’s time to visit the doctor.

We’ve all knocked our heads at least once in our lives, maybe due to tripping over a loose paving slab, or to falling off a bike, or to walking into the corner of the overhead cupboard door for the third time this week — will I ever learn?! More often than not, even when we’re seeing stars, we brush off the accident and continue with our day, oblivious to the long-term damage we may be doing.

After some thorough research, Jennifer Fox, founder of FoxBot Industries, concluded that forces of 4 to 6 G sustained for more than a few seconds are dangerous to the human body. With this in mind, she decided to use a Raspberry Pi Zero W and an accelerometer to create helmet with an impact force monitor that notifies its wearer if this level of G-force has been met. 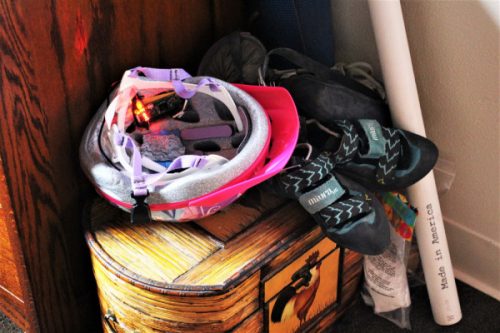 Obviously, if you do have a serious fall, you should always seek medical advice. This project is an example of how affordable technology can be used to create medical and citizen science builds, and not a replacement for professional medical services.

Setting up the impact monitor

Jennifer’s monitor requires only a few pieces of tech: a Zero W, an accelerometer and breakout board, a rechargeable USB battery, and an LED, plus the standard wires and resistors for these components.

After installing Raspbian, Jennifer enabled SSH and I2C on the Zero W to make it run headlessly, and then accessed it from a laptop. This allows her to control the Pi without physically connecting to it, and it makes for a wireless finished project.

Jen wired the Pi to the accelerometer breakout board and LED as shown in the schematic below. 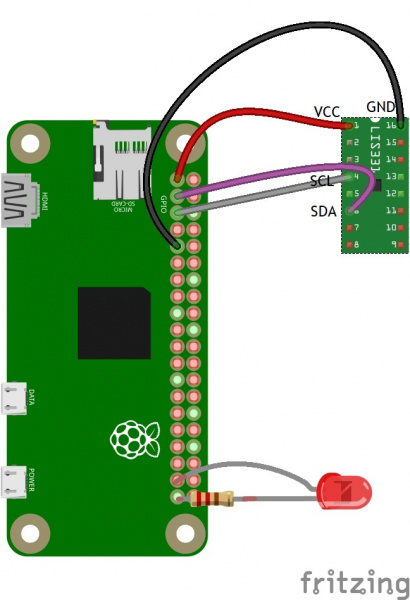 The LED acts as a signal of significant impacts, turning on when the G-force threshold is reached, and not turning off again until the program is reset. 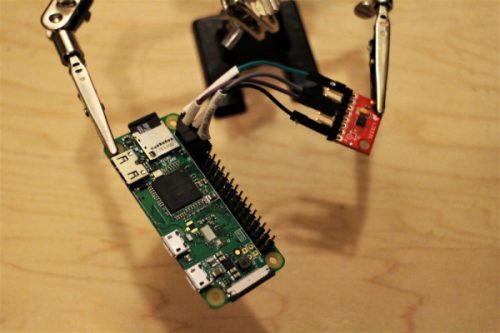 Make your own and more

Jennifer’s full code for the impact monitor is on GitHub, and she’s put together a complete tutorial on SparkFun’s website.

For more tutorials from Jennifer Fox, such as her ‘Bark Back’ IoT Pet Monitor, be sure to follow her on YouTube. And for similar projects, check out Matt’s smart bike light and Amelia Day’s physical therapy soccer ball.

With a £1000 grant from Santander, Poppy Mosbacher set out to build a full-body 3D body scanner with the intention of creating an affordable setup for makespaces and similar community groups.

Poppy herself wanted to use the scanner in her work as a fashion designer. With the help of 3D scans of her models, she would be able to create custom cardboard dressmakers dummy to ensure her designs fit perfectly. This is a brilliant way of incorporating digital tech into another industry – and it’s not the only application for this sort of build. Growing numbers of businesses use 3D body scanning, for example the stores around the world where customers can 3D scan and print themselves as action-figure-sized replicas. 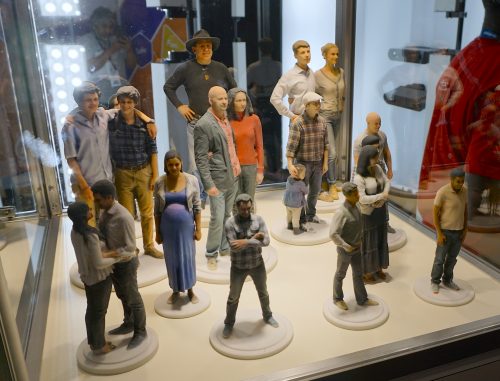 Print your own family right on the high street!
image c/o Tom’s Guide and Shapify

We’ve also seen the same technology used in video games for more immersive virtual reality. Moreover, there are various uses for it in healthcare and fitness, such as monitoring the effect of exercise regimes or physiotherapy on body shape or posture.

Within a makespace environment, a 3D body scanner opens the door to including new groups of people in community make projects: imagine 3D printing miniatures of a theatrical cast to allow more realistic blocking of stage productions and better set design, or annually sending grandparents a print of their grandchild so they can compare the child’s year-on-year growth in a hands-on way. 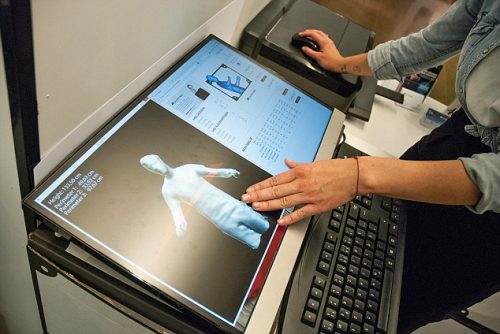 As cheesy as it sounds, the only limit for the use of 3D scanning is your imagination…and maybe storage space for miniature prints.

For her build, Poppy acquired 27 Raspberry Pi Zeros and 27 Raspberry Pi Camera Modules. With various other components, some 3D-printed or made of cardboard, Poppy got to work. She was helped by members of Build Brighton and by her friend Arthur Guy, who also wrote the code for the scanner. 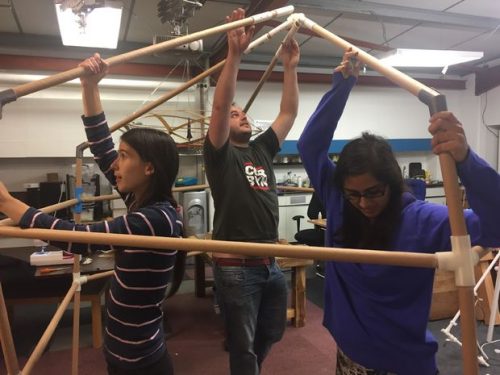 The Pi Zeros run Raspbian Lite, and are connected to a main server running a node application. Each is fitted into its own laser-cut cardboard case, and secured to a structure of cardboard tubing and 3D-printed connectors. 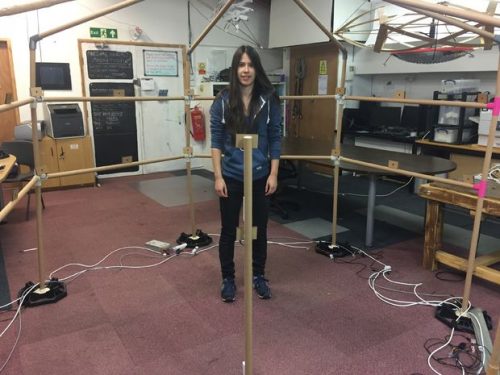 In the finished build, the person to be scanned stands within the centre of the structure, and the press of a button sends the signal for all Pis to take a photo. The images are sent back to the server, and processed through Autocade ReMake, a freemium software available for the PC (Poppy discovered part-way through the project that the Mac version has recently lost support).

Obviously there’s a lot more to the process of building this full-body 3D scanner than what I’ve reported in these few paragraphs. And since it was Poppy’s goal to make a readily available and affordable scanner that anyone can recreate, she’s provided all the instructions and code for it on her Instructables page.

Projects like this, in which people use the Raspberry Pi to create affordable and interesting tech for communities, are exactly the type of thing we love to see. Always make sure to share your Pi-based projects with us on social media, so we can boost their visibility!

If you’re a member of a makespace, run a workshop in a school or club, or simply love to tinker and create, this build could be the perfect addition to your workshop. And if you recreate Poppy’s scanner, or build something similar, we’d love to see the results in the comments below.

The Tough Pi-ano needs to live up to its name as a rugged, resilient instrument for a very good reason: kids.

Brian ’24 Hour Engineer’ McEvoy made the Tough Pi-ano as a gift to his aunt and uncle, for use in their centre for children with learning and developmental disabilities such as autism and Down’s syndrome. This easily accessible device uses heavy-duty arcade buttons and has a smooth, solid wood body with no sharp corners.

24 Hour Engineer is a channel to showcase the things I’ve built. Instructions for the Tough Pi-ano can be found at my website, 24HourEngineer.com and searcing for “Tough Pi-ano.” http://www.24hourengineer.com/search?q=%22Tough+PiAno%22&max-results=20&by-date=true

The Pi-ano has four octaves of buttons, each controlled by a Raspberry Pi Zero. Each Zero is connected to a homebrew resistor board; this board, in turn, is connected to the switches that control the arcade buttons. The Tough Pi-ano is designed specifically for musical therapy, so it has a clean and uncomplicated design. It has none of the switches and sliders you’d usually expect to find on an electronic keyboard. The simple body, with its resilient keys, allows the Tough Pi-ano to stand up to lots of vigorous playing and forceful treatment, providing an excellent resource for the centre.